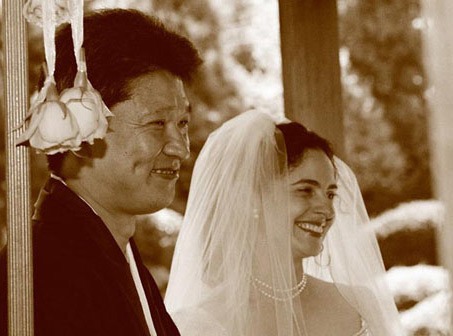 Share
Jennifer Kaplan's documentary 'Mixed Blessings' explores the choices interfaith couples make when raising their children, dissecting the familial role of religion and examining how religious choices can make or break a marriage.

"It wasn’t raining when Noah built the ark."

Author Howard Ruff had a point; preparation is key, insight invaluable. So when two people of different religious backgrounds meet, fall in love, and decide to get married, one might expect that the subject of children be broached. While many interfaith couples have no problem adapting to the religious lifestyles of their spouses, children can complicate the mix.

Director Jennifer Kaplan first became interested in the dynamic of interfaith marriages when she herself became involved in an interfaith relationship. She began making the film as an exploration of partnership, but soon discovered, through her interviews and research, that most couples have no problem accommodating each other’s religious values and traditions; it’s when they decide to start a family that things can get ugly. It’s certainly an understandable predicament; when an individual’s perspective is strongly influenced by his or her religious upbringing, of course they’ll want to pass their values and traditions onto their kids. The desire extends beyond faith; it’s natural for a parent to want to incorporate the experiences of their own youth into the lives of their children, be it religious values, cultural traditions, the food and music of their ancestors, family rituals. So, when a married couple has two completely different ideas about how children should be raised, it creates a conflict.

Once Kaplan shifted her focus and began documenting couples with children, the film became an intimate look into the lives of people trying to decide what’s best for the spiritual well being of their family.

"Mixed Blessings" follows four couples at various stages of their marriage, various stages of agreement, and various levels of marital harmony; the Bernstein, O’Connor/Chatinover, Rosenbaum, and Lynch families. All of the couples involve one Christian and one Jewish partner, and they have all made different decisions about their children.

Edith and Aaron Bernstein spent several years attending interfaith support groups before ultimately deciding to raise their two children Jewish, as Aaron had been raised. The decision was difficult for Edith, raised Protestant in her home country of Switzerland. Although the couple didn’t find their religious differences problematic while they were dating, once they married and had children, Aaron began to feel strongly that Judaism should be a part of his family’s life.

When Beth O’Connor and Jonathan Chatinover became engaged, they agreed to raise their children in the Jewish faith. However, Beth, a devout Catholic, became uncomfortable with this notion once she had children, and proposed that they raise the kids in both faiths. While the couple has different views on how religious traditions and the role God should be incorporated into their lives of their children, Beth and Jonathan do try to represent their religions equally in the realm of the family.

Eileen and Kevin Lynch also made the decision to raise their children Jewish. However, when Eileen, a dedicated Jew, was five months pregnant, Kevin, a practicing Catholic, changed his mind. Once their son was born, Kevin insisted that the traditional bris (Jewish circumcision ceremony) be followed by a baptism. They have since had another child, and their marriage is wrought with conflict over how to raise the children, even though they thought they had reached an agreement prior to starting a family.

When Ned Rosenbaum married his wife Mary, he barely knew anything about Judaism, having been raised in a household that was Jewish, but non-observant. Mary, raised with a non-observant Lutheran father and a strongly observant Catholic mother, was adamant that Ned explore his own religion as well as work on ways to accept hers. Now married nearly forty years, the Rosenbaums each have strong individual religious identities and a terrific partnership. They raised their children with exposure to both faiths and allowed them to choose for themselves how they would maintain their spirituality.

The film provokes some interesting questions. If a couple approaches a marriage with two completely different religious backgrounds, is it really necessary to choose one or the other, or can two faiths coexist harmoniously, manifested in the lives of offspring? Why is it so important to incorporate religion at all? Is it to demonstrate values and morality? To teach a child how to be a decent and successful human being? Does it matter how these things are taught to children, as long as the message gets across? And if it does, is it that important if the messenger wears a crucifix or a yarmulke?

Watching the couples interact with each other and with their children is fascinating. In some scenes, you get a sense that the couples are confident in their religious decisions; in others, it seems painfully clear that one of the spouses "won", and the "loser" is grinning and bearing it. Eileen Lynch is unapologetically furious with her husband for reneging his decision after the point of no return. One has to wonder if the tension between them is rooted in religious differences, or in promises unkept. In either case, they cannot agree to disagree. On the contrary, Ned and Mary Rosenbaum have a reassuringly healthy relationship, having nurtured each other through forty years of religious and personal exploration, and keeping a delightful sense of humor about the struggles couples can face about religion.

Kaplan does a terrific job of exploring the foundations of marriage as well as the dynamics of mixed faith, parsing communication, trust, compromise, and exploration in the context of matrimony. Most interesting is that the film exposes a truth that is often overlooked or understated; that, beneath the religious traditions and texts, Christianity and Judaism have crucially common ground. Each faith strives to steer its members towards spiritual and philanthropical excellence by teaching morality and humanity, offering hope and wisdom and guidance. It is admirable that the couples in Mixed Blessings are trying to cooperate in order to give their children a spiritual identity, and the demonstrated dedication to their families is a valuable lesson for their children (and the audience) in and of itself.