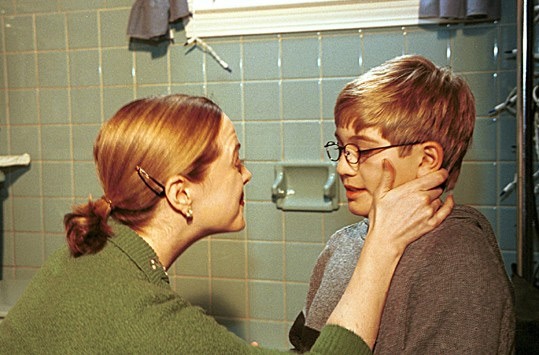 Share
Jeremiah Kipp talks about the inspiration for 'The Christmas Party,' a short film about a not-so-average holiday get-together, screening at FilmFest New Haven this month.

Jeremiah Kipp’s inquisitive eyes are constantly on the move. In a rear booth inside Ace Bar in New York City’s East Village, the diminutive, energetic filmmaker is rapidly answering questions about his semi-autobiographical short film "The Christmas Party," periodically punctuating key points by slamming the table with his right fist. The bar, with its prominent display of vintage ‘70s and ‘80s lunchboxes featuring the likes of "Charlie’s Angels" and "He-Man," is dark except for some fiery red wall lights that barely illuminate our faces, yet it’s hard to ignore the watchful Kipp carefully scrutinizing every pub patron’s movements around the bar or nearby pool table. Then again, Kipp has always been acutely fascinated by the intimate details of everyday life.

Kipp’s latest film is an unsettling 20-minute cinematic short about a boy who, sent to a holiday get-together by his atheistic grandparents, discovers that the party’s hosts are fundamentalists bent on converting him to their brand of fire-and-brimstone Christianity. The film, which will appear at FilmFest New Haven in September after having been awarded Best in Show at July’s God on Film Festival in New York and second prize at A Taste of Art’s Short Film and Video Festival in New York in May (leading to two screenings at France’s College International du Cannes), is — like much of Kipp’s output — an assured work defined not by grand gestures but by understated touches. And considering the story’s roots in Kipp’s own upbringing, it is also the director’s most personal film to date.

"I learned at a very early age that, if something weird is happening, you can put a frame around it and put it in a certain context," says Kipp, who won the Best Director prize at the 48 Hour Film Festival in 2002 for his film "Snapshot." "Whenever I was pissed off about something as a kid, my granddad would say, "No, just observe, see what this is about. You can always [use it] for your drawing or writing."

It turned out to be prescient advice. Until leaving for NYU film school in 1992, Kipp lived in Hopkinton, R.I. with his single mother and her parents in a house that, according to family lore, was won by his grandfather in a poker game. The community was predominantly Christian, and across the street lived a fundamentalist Christian couple who disliked the zombie and monster movies the then-12-year-old Kipp filmed in his front yard. Working on a school paper about religion, Kipp interviewed his devout neighbors, who asked if he would like to be converted to Christianity. Thinking it would be great material for his school report — and figuring he’d never again have the opportunity to see such religious devotion first-hand — the budding filmmaker agreed. The ensuing event would later form the basis for "The Christmas Party."

"They took me into their bathroom, dimmed the lights, and sprinkled water on me," remembers Kipp, who says the impromptu ceremony utilized a "strong, patented technique. They attempt to break your defenses down with fervent prayer… by having you answer ‘Yes’ to a series of general questions like ‘Are you discontented?’ ‘Do you want to make more money?’ ‘Are you interested in the universe?’" Although intense, the ritual didn’t faze Kipp, who went home thinking he’d had an interesting and unusual (but hardly transcendent) experience. But he began to regret his decision days later when his grandfather began receiving calls from the couple asking if Jeremiah would like to come to church with them.

Still, it was a formative experience for the young filmmaker, who — as a self-described agnostic growing up in an atheistic household — frequently felt alienated by his community’s stern religiosity. This sense of isolation pervades "The Christmas Party," which tells the story of a despondent boy’s initial confrontation with strict religious beliefs. Gabriel (a wide-eyed Austen Labbe) lives with his grandparents because of his mother’s struggles with alcohol. Depressed on Christmas morning, Gabriel is dropped off at a local party by his elderly guardians, where a religious couple exploits Gabriel’s loneliness by indoctrinating him with biblical tales of salvation and redemption. Yet after Gabriel begins to feel accepted by his spiritual new friends, the boy’s happiness is sabotaged when, on the way home, his grandfather bluntly explains to him that the Easter Bunny, Santa Claus, and God do not exist.

For maximum authenticity, Kipp shot the titular get-together in his childhood home. "Originally, we were going to shoot at another house, because I didn’t want to burden my grandparents [with a film crew]," he explains. But after realizing that their living room had the ideal layout for the film’s party scene, he convinced them to allow a film crew to temporarily occupy their house’s lower level. "Because I had filmed so many movies there as a kid, I think they felt like it had come full circle."

Kipp, however, is eager to point out that — despite its similarities to his own life — "The Christmas Party" is ultimately a work of fiction. Noting that his mom is not an alcoholic and his grandfather is not belligerently anti-religious, he says. "My childhood was grand. I had the most nurturing childhood you could imagine."

The director’s use of reportorial details is a prominent aspect of "The Christmas Party," from the tense, scrunched faces of praying children to the creepy ‘50s sweater and skirt worn by the party’s hostess. In its finest, most surreal moment, Gabriel is disturbingly rewarded (one might say bribed) for being saved with an extra piece of Christmas cake. Kipp says the scene is taken directly from a childhood friend’s experience at a similar Christmas Party, and was included because it exemplifies the ways in which dogmatic beliefs are promoted and sold. Plus, he says, "It was almost too good an anecdote to be true."

This interest in commonplace minutiae first surfaced in Kipp’s 2002 short "Near to You," which spends its first six minutes focused on its female protagonist’s precise morning rituals. "Jeremiah’s a very observational person, but it’s hard for me — or anyone, actually — to gauge what he takes in and what he doesn’t, because he listens more than he speaks," says the film’s producer Rachel Gordon, who’s known Kipp since the late ‘90s when they both worked at Manhattan’s Independent Feature Project.

Kipp’s fixation on life’s finer points is reflected in his meticulous directorial style. "Jeremiah is the type of person who will double and triple check you. He’s a micromanager… a perfectionist," says Gordon, whose natural tendency to "let things go" after a certain point occasionally clashed with Kipp’s more obsessive temperament about lighting, set design, or cinematography. Nonetheless, Gordon says there were no major blow-ups during production, and that, in any event, Kipp has every right to nit-pick since the film "is going to directly reflect on him."

When not toiling away on various film projects, the industrious Kipp works in New Line Cinema’s Business Affairs department handling cast and crew contracts, and moonlights as a freelance film journalist for publications such as Fangoria and Filmmaker Magazine. Yet despite his work as a reporter and film critic, Kipp says he doesn’t "make films from the same place as when I come at them critically." Where his critical work strives to examine films from various angles, "when I’m working on a film, I have certain things I want to communicate, but I don’t really attempt to understand every little reason for why I’m doing something."

His inspiration, he says, comes not only from real-world events, but also from the films he grew up watching. The ominous atmosphere and icily creepy cinematography (courtesy of Jon Miller) recall John Carpenter’s "The Thing" — a film Kipp cites as one of his all-time favorites — and his film’s compassionate, unpretentious portrait of Gabriel as confused, scared, and courageous was inspired by the early work of Steven Spielberg. "I saw ‘E.T.’ a lot… and when Spielberg shot ‘E.T.,’ he put everything from a kid’s point of view. We tried to tell ‘The Christmas Party’ as much as possible from a kid’s point of view, albeit from a much more detached, alienated place than Spielberg’s film."

Outgoing and talkative, Kipp is noticeably more voluble when he’s speaking about the films and filmmakers he loves. References to Stanley Kubrick, Todd Haynes and Jonathan Demme routinely pepper his anecdotes, and he frequently mentions other directors when discussing specific shots and scenes from his films. "Jeremiah is like an internal encyclopedia of film knowledge," says Gordon.

In a world where "The Passion of the Christ" is the year’s biggest box office success, Kipp is proud that his new film portrays both the pious and non-believing characters fairly. The film’s unexpected conclusion is what attracted Dan Bianchi, founder and programmer of the VideoTheaterNYC, to include the film in VideoTheaterNYC’s "Inspirational Shorts Nite" in March 2004. Bianchi says he was impressed not only by the film’s professional construction, but also by its moral even-handedness. "At the end, it kind of leaves you on the fence. I like that, instead of just hitting you over the head with a sledgehammer all in one direction."

Although he admits that his sympathies lie with the film’s grandfather, Kipp says his goal was to show religion’s frequently "unyielding, one-sided worldview." "I think the granddad and the Christians are coming from a place of good… but the kid, ironically, probably gets more screwed up by confronting these two incredibly rigid, conflicting dogmas than he was before [the party]. So he’s like a ship that’s been cast away."

The same can be said of most short films, which, according to Bianchi, rarely find an audience outside a filmmaker’s network of family and friends. This, alas, is the chief problem for every director of shorts: although many filmmakers prefer to work in the short film medium, the reality is that the majority of shorts are created as calling cards designed to garner more high-profile work. "For the most part, that’s what even the biggest film festivals are," says Bianchi. "They’re like Career Day at high school. You show up with your project and go to the booth you want to make a career in."

Kipp admits that "The Christmas Party" is a calling card, since he too would like to get paid to be a full-time filmmaker. His immediate goal, however, is "to get the next movie made" — in this case, an as-yet-untitled modern retelling of the Orpheus legend. Although he didn’t write the script, the new short’s preoccupation with Sartre’s notion that "Hell is other people" has echoes of his film’s distrust of religious or ideological doctrines.

"You know, you want to express a certain thing and it’s very gratifying to make a movie for yourself. But I don’t make them to put them on a shelf," says Kipp. To that end, he says enhancing the film’s exposure by getting it accepted in festivals is paramount. Next stop on the festival circuit will be the fifth annual FilmFest New Haven, a four-day showcase for independent filmmakers running from September 16-19 at York Square Cinemas (61 Broadway) and Little Theater (1 Lincoln Street). For more info, visit Jeremiahkipp.com and Filmfest.org.