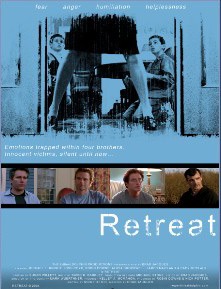 Share
'Retreat' will be one of the competitors in this year's Woods Hole Film Festival -- a fitting opening for this heartfelt local feature, shot on location in Falmouth and Boston.  NewEnglandFilm.com talks with screenwriter/producer Nick Potter about the making of the film.

Set in picturesque Cape Cod, MA, "Retreat" tells the story of four orphaned brothers who, as adults, journey back to the summer home where they suffered abuse at the hands of a cruel governess. Together again, they are forced to face their estrangement from one another, as well as a past that continues to haunt them. "Retreat" brings pain, resentment and, ultimately, healing to the surface, as it explores the complexities of human relationships and the depths of the human heart.

The brainchild of screenwriter/producer Nick Potter and actor/producer Robin Downs, "Retreat" is the first feature film produced by the two friends and collaborators. After meeting 14 years ago on a semester-at-sea program, Potter and Downs formed The Littlest Dolphin Productions, inspired by a mutual appreciation for cinematic and dramatic arts and the belief that "working with tried-and-true friends creates an atmosphere of trust and happiness that shows up on the screen."

NewEnglandFilm.com recently caught up with Mr. Potter to discuss his inspiration for "Retreat," as well as his fascination with the human psyche.

EL: You hold dual Master’s degrees in Screenwriting and Counseling Psychology, two seemingly unrelated areas of study. Was this a strategic move born out of your interest in the "psychological drama" genre?

Potter: My first Master’s degree was my degree in screenwriting from the University of Southern California’s renowned Master of Professional Writing program, which was –and is — one of the greatest academic programs on the planet and for which I’m extremely grateful to have experienced. My professors were Oscar winners, founding executives in the Writer’s Guilds, acclaimed novelists and screenwriters and poets. They were teachers because they loved the written word and loved helping new artists understand the important balance between art and business. They were there because they loved it, and I don’t know of any other creative academic program where the dedication of the staff came always from the heart first, and not because they were out of work and needed teaching jobs.

After USC, I spent a number of years as a script doctor, a reader, a studio intern, a talent agency intern, a clerk in an entertainment law firm and, of course, a waiter! And in all those jobs, though I was grateful to have them, I noticed an over-industrialization that seemed to permeate financial Hollywood. It’s nobody’s fault, and I don’t mean this to be critical or negative. Any business that grows so big and so lucrative so fast is going to attract people for reasons other than a genuine passion for the product. I simply didn’t feel at home with what the movie business was in the early and mid-90s. Wide acceptance of independent filmmaking was in its infancy in those days, and I would see movies like "Murielle’s Wedding" or "Good Will Hunting" or "Swingers" that were about real people and real feelings and emotions, and I thought, "Hey, that is for me! I want to write about people and what makes them tick. I want to write about things that give the average person a chance to feel less alone in the world. I want to know about and help human beings, not super heroes!" It might sound a bit cornball, but that is the truth. Expression of emotion in an artistic medium feels like my true calling because I like the idea that just by doing something I love to do for a living, I also get a chance to try to send good messages and ideas into the universe, and that matters to me a lot. If a movie like "Retreat" can make one person or family feel less isolated and hopeless in this world, then it has to be made! It has to! So, yes, I did know when I went back for my Master’s degree in educational/counseling psychology that I would not stop writing, but if I couldn’t support myself as an artist, I would much rather be a therapist than a business man in the entertainment industry.

EL: How did your interest in psychology originate?

Potter: I have always been fascinated with psychology in terms of education and communication. It’s kind of been my personal belief, since as long as I can remember, that damn near every major problem we face in this world can be traced back to a place where two or more good people didn’t know how to express their goodness to each other. I believe the vast majority of people are born with natural goodness and kindness that is somehow lost in translation. As for some people who are born mean, well, like one of my favorite bumper stickers says, "Mean people suck." But fortunately I think truly mean people are few and far between.

EL: I would think that being consumed by the study of psychology would bring an abundance of different character ideas. Did this concept of four abused brothers come to you during the pursuit of your Master’s in psychology? What, or who, was your inspiration?

Potter: The idea for "Retreat" did come to me when I was working on my degree, and I had a field placement assignment where I was able to see firsthand how sometimes the very unluckiest of people turn out to be the most heroic of us all. I wanted to tell a story that highlighted those parts of people that seem to be their greatest vulnerabilities but then turn out to be the parts of them that create their greatest strengths. I met a young man who had had a lot of really tough breaks, and as I started to conjecture about what an amazing and inspirational person he could become as an adult if he got just a little bit of help, I started to come up with the character of Carly, who is the central character of "Retreat."

EL: There are wonderful performances in this film, including your fellow producer Robin Down’s portrayal of Carly. Did you write this part specifically for him?

Potter: The script was written independently of any specific thoughts on casting.  Robin is an incredibly strong actor, even when also wearing a producer’s hat and thus living for months on end with little or no sleep and a lot of responsibilities, aside from being dedicated to his role.  The bottom line was that Robin felt an affinity for the character; Carly’s vulnerability, his good intentions, and his frustration with having to keep a little boy’s dark secret, not only out of fear and trauma, but out of integrity and a genuine desire to try to bring a broken family together without having to play the victim card.  He was the guy for the part, plain and simple.

EL: Once you had the story of Carly and his brothers completed, was it a smooth ride getting "Retreat" from completed screenplay form to "in the can," or did you and Mr. Downs hit a few bumps along the way?

Potter: There was nothing smooth about going from an idea to a script to a movie. It has been seven years of hard work and dedication on the part of Robin Downs and myself and a few friends and family members. People who believe in you even when something takes so long and becomes so much more complicated than you ever envisioned, are as much the reason that movies like "Retreat" get made as the producers themselves. People who support artists, financially or morally or both, are incredible artists themselves. There should be an awards ceremony just for them!

Potter: There are war stories and none of them are fun! We saw greed and thievery and glory-seeking and social climbing in some people we ran across that made it particularly hard — and very ironic — to deal with while trying to make a movie about innate human goodness. But our real friends and supporters helped us remember that every adversity offers a lesson to be learned, so we kept going and kept our eye on the ball. We’re certainly more savvy now than we were at the onset of this project, and I think that will serve us well on our next picture.

EL: As an aspiring filmmaker, it’s interesting for me to hear how all of the finances come together for an indie film. How did you and Mr. Downs raise those funds?

Potter: It took five years to raise the funds and a lot of pride swallowing, saving, and grueling hard work. But again we also had some wonderful people open their hearts and wallets because they believed in us and in this film, and for that we are extremely grateful. In fact, there truly are no words for how grateful we are to some of the people who helped make sure this goal remained possible.  In the end, Robin and I got out our credit cards and made up the difference.  We simply had to finish the picture.

EL: "Retreat" will premiere at the Woods Hole Film Festival on August 2nd. Has it appeared in any other festivals, or will this be the first?

Potter: It has not appeared in any other festivals to date. One of the things that felt like a pretty tough break was that we had a technical problem with a faulty lens during a key scene where all the principle characters were present. It wasn’t something that we could see on the dailies, so we weren’t able to identify the problem until we were editing and looking at the shots in high definition. We had to wait an entire year to organize re-importing most of the cast, including my dog, to re-shoot a single scene, and then another six months to re-edit the replacement scene. We are really excited that [the film’s] first chance to screen at a festival is taking place in Woods Hole. It seems fitting, and we are hoping that the people, who did choose to be good and helpful to us, will take the opportunity to be proud of what they have helped to accomplish.