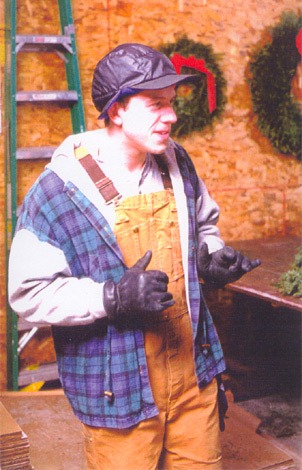 Share
As they prepare for the premiere of 'Baby It’s Cold Outside' at the Maine International Film Festival, the film’s writer/producer (Pam Ross) and director (Polly Bennell) share stories about the trials and tribulations of making the film that are as quirky and comedic as the movie itself.

In her first film, Pam Ross has gathered enough experience to teach a seminar on Filmmaking 101. Most importantly, the businessperson/actor turned screenwriter/producer has learned the most important attribute for completing an independent film: persistence. When her film, "Baby It’s Cold Outside" premieres July 11th at the Maine International Film Festival, it will be after nearly 5 years of work and a host of complications during filming.

It all started innocently enough when some real life experience inspired a creative idea. Ross, who was raised in New York but has lived in south Florida for many years, hates the snow and cold weather. "I was seeing this guy who had a place up North and he was trying to convince me to move up there and I started to think, ‘Well, he makes a pretty good salary, maybe I wouldn’t have to go outside for the winter.’" She never did venture north, but the idea for a comic story with the same romantic premise began to grow in Ross’s mind.

When asked why she chose film as the medium for the story, she explains, "I was going to help someone else make a film, but that never happened. I have a background in business and I’ve owned my own business so I thought, ‘Why not produce my own film?’"

Ross’s first order of business was to find someone to write the script based on the boy loves girl — girl loves boy but hates winter premise she provided. She went to a writer’s group in Miami, stood in front of a room full of people and presented her idea, asking anyone who was interested to pick up an entry form at the end. "Everyone took forms," she says, "and then I got no entries." Undaunted, Ross decided that she would learn the screenplay form and write it herself, which she did.

Ross set the story in Florida and Maine and decided that she wanted to film in those locations, with the bulk of the filming to take place in Maine. She also wanted to direct the film but knew that as screenwriter, producer and lead actor, she had enough responsibility already. After consulting with the Maine Film Office she got 3 recommendations for a director, interviewed them, and hired Polly Bennell.

Bennell, a Portland resident, has an MFA in film from New York University and had directed short narratives, commercials and industrials, but not a feature length film. "The surprise for me was getting the phone call that never comes, the ‘I’m looking for a director’ call that is every small-time, independent director’s dream," Bennell says. She read Ross’s script and was impressed, "I loved her characters." For her part, Ross says that Bennell, "Seemed to really understand the characters and the movie — that’s what influenced me."

"Baby, It’s Cold Outside" tells the story of Holly Hawkes (played by Ross) who meets and falls in love with Rob Robinson (Tom Cumler), a successful wreath maker from Northern Maine. She marries him and follows him home only to find that she has left behind her natural habitat and is undone by winter in the Northeast. The film is a comedy or a "goof on winter movie" as Ross puts it. "I put everything that’s bad about winter in the film."

"Pam is a gifted comic writer," Bennell says. The director had a month to prepare and watched many comedy videos, particularly the films directed by Mike Nicholls and Elaine May for inspiration. At the same time she was preparing for the debut of her first feature documentary. It was a hectic time and a fretful one, for although Bennell was excited to direct her first feature film, she did have some reservations. "[This] script was full of ridiculous complications — it had an animal, it had a child and the story was completely weather dependent. Oh, and the animal was an anteater!"

The anteater is integral to the plot because it is the device that brings the couple together and it also travels from Florida to Maine and has great difficulty adjusting to the new climate just like the main character. The filmmakers found out that you could not rent an anteater, but you could purchase one, so that’s what Ross did. "Antony" arrived from South America and Ross found an animal trainer to work with it. While they were shooting at a bed and breakfast in Maine Antony stayed in Bennell’s room during the day because it was the largest. "Anteaters smell really bad," she remembers, "and my room just reeked!"

Antony may have been malodorous but he proved to be more cooperative than the weather. What should have been a Maine-in-March winter wonderland was in fact a landscape of bare frozen ground. During their 13-day shoot in Bridgeton, Maine the cast and crew experienced "temperature in the 50’s and the warmest winter in 200 years," says Ross. As the producer she needed to add a new line item to the budget: snow wrangler.

Bennell says "We had farmers with backhoes scraping 4 inches of snow off their fields, loading it into trucks and bringing it to where we were shooting." Enter the snow wrangler with a snow blower and he would, "put it where we needed it."

Besides the uncooperative weather, there were some human complications as well. In Maine they used an historic home for the shoot and Ross says, "The owner was gracious and wonderful — she even went away. However, she arranged for a friend to check on the house and the friend came every day, freaked out and threatened to call the owner and have us thrown out."

Later they scheduled a two-day shoot in Florida for pick-ups and flew the Maine actor Tom Cumler down and all was well until the next morning. "Suddenly he becomes so sick that he couldn’t even stand," Ross relates. "We literally had to prop him up." In post-production they were forced to use some of the footage even though the actor looks so sick.

Of all the "complications" in the script that concerned Bennell, the child turned out to be the least of the problems. Henry Beck, who was 12 years old at the time of filming, plays the part of Rob’s son Webster in the film. His character is still dealing with the death of his mother and is not quite sure he wants to welcome Holly into the household. "[Beck] was so wonderful," says the director, "he just rolled with everything."

Ross, who trained as an actor at the Lee Strasberg Theatre Institute, says, "As an actor I prefer comedy — I knew I wanted to play this part." But she concedes that, "I took on a lot — writing, producing and acting." In retrospect, she feels that she often had to sacrifice her preparation time to attend to her other responsibilities. "Every problem on the set, and there were a lot of them, was coming to me. I didn’t have enough time to prepare for the role."

Ross says the movie "goofs on Maine a little. We goof on Florida too so the Maine people shouldn’t take it too seriously." The actors were asked to speak in Maine accents Bennell says, "But everyone invented their own and it was hysterical!" Ross calls it "talking Yankee" and in one section she put in subtitles. Bennell thinks the mix of accents just adds to the screwball comic effect of the film.

Bennell says, "There are lots of visual gags in the film." As the producer, Ross believes that the proliferation of sight gags will help sell the film to the foreign market. She’s also says she’s "Looking towards the home DVD market." Ross thinks the film will appeal to families because it’s fun without nudity, foul language or violence.

"Pam is amazing," says Bennell with admiration for Ross’s determination and willingness to learn new skills. "This is her first foray into filmmaking!" Bennell also gives Ross great credit for committing to filming in Maine with a crew and cast of local talent. Through all of the trials and tribulations Ross faced in completing her film she says that her motivation came from within herself.

"From the beginning I made up my mind that I was going to see it through," she says. The premiere will be a satisfying moment for Ross and the beginning of what will hopefully be a successful marketing phase for "Baby It’s Cold Outside."

Oh, and Ross may be accompanied to the premiere by one of the other stars of the film. If the breeding farm in Texas will arrange for a leave for Antony, he just may be walking down the red carpet too.