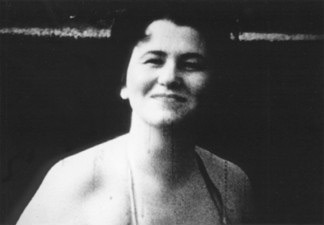 Share
Filmmaker Louise Bourque addresses the subconscious mind, gender roles, and the concept of home with her innovative work which screens in a WIFVNE series this month at the Boston Public Library.

It’s been said that the next brave new world for filmmakers to explore is the subconscious mind. Most films avoid this frontier because of its challenging complexity; the dominant commercial screenplay allows only for dialogue, not inner monologue, to drive the theme. Enter Louise Bourque, whose stylized form for addressing unresolved tension is guaranteed to elicit an emotional reaction.

Bourque’s films are refreshing in the way that she uses the "personal as political, and poetics as politics." Since she finds "discourse in form," her rejection of formula by "deconstructing the traditional way in which a story unfolds in film is a kind of political statement." Bourque wants viewers to have the freedom of open-mindedness and the "space for inquiry" to counter the commercial film industry’s domination in "setting expectations of what a film should be." Since her focus is the exploration of psychological and societal issues, her approach accurately portrays these gray areas that are often ignored in mainstream movies.

Bourque describes herself as a film artist, with work that does not easily fit within an existing genre. Though her style might be considered avant-garde or experimental, she has reservations with both terms. "’Avant-garde’ tends to be associated with the past, making the term lose its innovative connotation, while ‘experimental’ seems to imply an unfinished quality to the work."

Because she communicates whole ideas through nonlinear elements, Bourque describes her work as poetic. Conveying snatches of emotion that compound until overwhelmed by a deeply hidden memory, she intends "to give shape to the dark elements that we can’t speak of." Quite adept at discussing her work as a teacher of cinema, she is disinclined to be overly intellectual about her filmic pieces. Like evocative poetry, impressions and contemplation come first; questions and comments about technique and inspiration follow.

Interested participants will be able to discuss these elements with Bourque at a screening on July 10th, who will respond with an eloquence that derives from her native French language. Two of her films, along with other innovative works from fellow local female filmmakers, will screen in the first of a series hosted by Women of Film and Video New England (WIFVNE) at the Boston Public Library. As an active member of WIFVNE, the French Canadian Acadian film auteur is always supportive of events that promote ‘experimental’ work. Bourque is particularly excited to participate in a program that showcases ‘experimental’ films by women. Within the community of female filmmakers, there is naturally a diversity of interests and topics. This can cause the focus to shift to women’s issues or political developments, where "form is considered separate from or secondary to the issues themselves." As a result, films that experiment with a new way of presenting their views are often "relegated to the fringe." In this program, form is elevated and showcased.

Bourque’s work applies an innovative method to subject matter inspired greatly by her upbringing. Growing up as the youngest of seven children in French Canada, Bourque witnessed her parents’ era (the World War II generation) "where roles were divided by gender, and lives were lived within the expectations of the Church. So many women of that generation had no voice, no space, no decision-making power on very simple things." As in the U.S., women undertook broad responsibilities during the Second World War, but were encouraged to return to homemaking upon the war’s end. "Afterwards, the industry [asked] ‘What can we do to get them back to their kitchens?’ Women were supposed to be happy with their appliances after the war."

Of course, a great deal of unhappiness fomented within women of this generation, and Bourque explores this internal struggle in "Just Words," using her family’s home movies to great effect. By alternating footage of her mother and her sisters with an intense performance by actress Patricia MacGeachy of Samuel Beckett’s "Not I," Bourque manages to sear into an unsettling and poignant result.

"All of Beckett’s plays are so resonant with the human struggle with existence, of being alive and all that can mean, including our own mortality. He is profoundly moving concerning the interiority of the characters…using language so skillfully that it seems to be a stream of consciousness. He captures the way we think." Indeed, "Just Words" subverts time by making fractured associations, mimicking human thought that functions within constant interruptions from both memory and anticipation, as well as external stimuli.

At one point in the 10-minute film, there are two voices quoting Beckett, resulting in a relentless rain of outcries to capture the main character’s frenzied mental purge. Though you can’t listen to both verbal streams, you absorb the message intuitively. "At one point you have to choose between the two voices, but then you realize that it doesn’t matter which voice you listen to… the tone, the speed, the manner, is just as important as the specific words themselves. It’s a woman of a certain age looking back, and you can’t quiet her voice anymore."

Like poetry, her films work on association, metaphor, rhythm, and suggestion. "You might create a link, and it comes back in another context and it creates another reading. Even if you don’t remember it, these associations build up. For instance, I used my sisters in a way to show the continuation of how gender roles are perpetuated. So there is a wedding scene, but there is also a first communion scene, where the girls are dressed all in white like little brides." In a "neo-expressionistic" style, she leaves no aspect in the film to waste, communicating through multiple channels of meaning.

"Just Words" represents the alienation that many people silently experience. "I wanted other people to relate to this film so that this portrait is not just of my mother, but …of many women. All of these films are shot in a particular context. And that’s where it’s not just about my mother, but about women of her generation. It also evokes women’s portrayal on film through the male gaze. When we’re filmed, how we respond is another issue." Bourque’s deep thought and richness inherent within her work resonate deeply on an expansive scale. As a result of her constant probing of difficult personal questions, her films have reached a broad audience with screenings in over 25 countries and have broadcast on PBS and the Sundance Channel.

Many still grapple with complex feelings towards home and their family, and this topic is addressed in "Going Back Home," her second film to be shown in WIFVNE’s program. "I found footage of collapsing shelters or dwellings that are undergoing some kind of attack or catastrophe, conveying a sense of loss. I really wanted to reflect on this idea… of home as an institution and how it’s idealized as a sanctuary. For many, it’s a dangerous place with complicated family dynamics and dysfunction behind the walls with unresolved memories."

Though she wanders far from the traditional form of storytelling, Bourque’s nonlinear, rhythm-based method allows her to capture the workings of the emotional mind and its reaction to societal confinement. As she says about her creative process where intuition and technique inform and play off of each other, "It’s kind of like jazz — you can pretty much go anywhere as long as you bring it back home." Bourque’s films will lead you on a twisting, turning journey back to the memories of your own past.