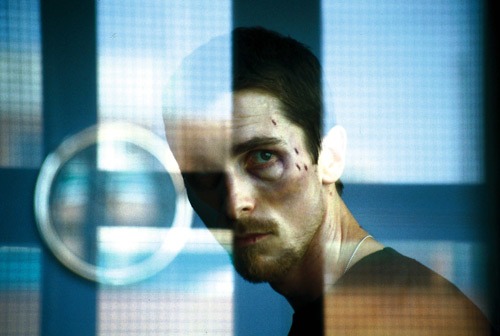 No Schwarzenegger in this film. No Terminators, big budgets, or "I’ll be backs." Local writer-director Brad Anderson’s latest movie "The Machinist" made its New England debut on May 9 at the Museum of Fine Arts in Boston. Known for such indie classics such as "The Darien Gap," "Happy Accidents," "Next Stop Wonderland," and "Session 9," Anderson continues his trend of producing medium-budgeted, high-quality films with "The Machinist" and once again proves that independent-style filmmaking is alive and well. "The Machinist" was produced in Spain and has shown at this year’s Sundance and Berlin Film Festivals and is set for general release this autumn through Paramount Classics.

"The Machinist," starring Christian Bale and Jennifer Jason Leigh, tells the story of a troubled man to whom strange things begin happening. The film is dark and bleak, shot in Barcelona’s industrial suburbs (though the locale is anonymous). The clues as to what’s occurring begin to add up in Hitchcockian fashion, and the ending is shocking as well as thought provoking. The screenwriter was heavily influenced by Dostoyevsky and Kafka, and the soundtrack is a tribute to Bernard Herrmann (composer of the music to Hitchcock’s "Psycho").

After the film, Anderson spoke to Gerry Peary, film critic for The Boston Phoenix, in a public interview, and he also took questions from the audience. One of the more shocking things he revealed — perhaps even more disturbing than the film itself — was actor Christian Bale’s dedication to the part. "He loved the script," Anderson explained. "It called for him to lose 60 pounds in two months, and he would eat only an apple a day to prepare. It was a dangerous and arduous thing to do, but the results were spectacular." Bale plays the addled machinist Trevor Reznik and is nauseatingly gaunt and emaciated, a far cry from the robust, healthy look he possesses in films such as "Little Women" and "American Psycho."

Anderson noted that the story was one that knocked around for a few years, garnering attention from the likes of the Coen Brothers before coming to him and Bale. "Most studios and production companies," Anderson said, "were put off by the dark, alienated nature of the story which was originally set in Los Angeles. Ultimately, however, Filmax in Barcelona offered to finance (the budget was about $4 Million Euros or $3.4 Million U.S. dollars) the movie if we shot it there." When asked by Peary what kind of audience he thinks will come to see the film, Anderson responded, "Who can say? I make a movie for myself first and foremost. I put all my passion and energy into every film I’ve done, and in audiences I hope to find like-minded viewers who share my interest in intellectual and subtextual cinema."

Paramount Classics is distributing the film and plans a fall 2004 release. One large target is the legions of Christian Bale fans called ‘Baleheads’ who have made him one of the most popular stars on the internet. Websites and blogs are dedicated to the actor, and the marketing campaign for the film will attempt to tap into Bale’s zine-style following.

Brad Anderson attended Bowdoin College in Maine where he began his filmmaking career. In the nearby Maine town of Richmond, Anderson learned of a Russian émigré community. As an anthropology and Russian major, he was intrigued by the enclave. He picked up a camera and made a documentary about the time-warp village which he claimed was a virtual transplant of a 1930s shtetl. Next, it was on to London where he formalized his film production education. He returned to New England soon thereafter to ensconce himself in Boston’s vibrant documentary community. While working in Boston, Anderson began to write fictional scenarios and dabbled in short-film narratives. In 1995, he produced his first feature-length film, "The Darien Gap."

One of the reasons "The Machinist" played at the MFA before its general release is due to a sense of nostalgia. "I have a fondness for the MFA," Anderson said. "One of the first venues ‘The Darien Gap’ played was at the MFA. It was my first film and there were about three people in attendance and only one media member." It’s been more than nine years since that showing and on May 9 quite a few more than three people as well as a slew of press were on hand to watch "The Machinist."

Anderson’s career, much more than in the sense of venue, has come full circle. He returns to the MFA as one of independent cinema’s leading figures. "The Darien Gap" played successfully at Sundance in 1996. The following year, 1997, "Variety Magazine" labeled him one of the top 10 independent directors to watch. Variety’s prognostication was vindicated when in 1998 Anderson’s Boston-set classic "Next Stop Wonderland" won a number of awards and earned him a deal with Miramax Films. In 2001, he had two successful films playing in theaters simultaneously: "Happy Accidents," a romantic comedy starring Marisa Tomei and Vincent D’Onofrio, and the psychological thriller "Session 9" starring David Caruso, Josh Lucas and Peter Mullan. In between making these films, Anderson has also directed episodes for television dramas such as NBC’s "Homicide," HBO’s "The Wire," and the FX hit "The Shield." He is currently developing two new projects. One is a thriller titled "Lucid" for Warner Brothers. The other project sees him teaming again with Mitchell Robbins (the producer of "Next Stop Wonderland") to work on a musical set in Brazil

The May 9th screening of "The Machinist" was sponsored by the Nantucket Film Festival (June 16-20, 2004) with which Anderson has had a long and happy association. "Next Stop Wonderland" was the opening night film at Nantucket in 1998, the infamous night when power on the island went out 30 minutes into the film recalls NFF executive director and co-founder Jill Burkhart. Both Burkhart and Anderson remember the mishap fondly, and Anderson praises the NFF as a festival that "celebrates the writer" and "puts the writer in the driver’s seat."

Putting the writer first has always been the mission of the NFF. Jill Burkhart and her brother John grew up on Nantucket and after returning from college hit upon the idea to gather films and other artistic pieces being produced by Nantucketers to showcase them in a festival. The first NFF was in 1995, just before the film festival explosion, with one location — a 100-seat theater where films were screened and staged readings performed. The NFF’s growth and reputation has been astonishing. "I can’t believe our 10th anniversary will be next year," says Jill Burkart. "I remember vividly the infamous skinny dipping party that broke out spontaneously the first year. It was a young and immature festival then, but we’ve grown so much since 1995, going from one venue and skinny-dipping to a festival of national repute that attracts star writers, directors, and actors. Our progress has been deeply gratifying."

One of the reasons for the NFF’s growing success is its original mission statement: "we’ve always focused on the writer," Jill Burkhart states. "We champion screenwriters and writer-directors [such as Brad Anderson] because we feel its one of the most underrated and difficult jobs in the film industry." Burkhart decries the oftentimes demeaning treatment and lack of attribution the screenwriter receives. She cites NFF special guest Ring Lardner Jr.’s description of how the writer is shunted to the background while the director receives all acclaim and credit for artistic vision: Lardner Jr. was the writer and chief creative force behind the feature-film M.A.S.H., but when he brought the property to Fox it became a ‘Robert Altman’ production and Lardner Jr., as writer, was all but forgotten as the inspiration and driving force behind the work.

This treatment of the writer is one that the NFF hopes to reverse. Now, more than any time, this seems to be happening, and the NFF’s screenwriting honoree this year is living proof of that. The writer/honoree is Charlie Kaufman, and whether one likes or dislikes his films, the movies with which he’s associated, more than ever, are being seen because of the writer’s [Kaufman’s] name and stamp. It’s been a long time, if ever, since people have attended a movie because of its screenwriter rather than its directors or actors, and hopefully the trend will continue. Past writing honorees at the NFF include Lardner Jr., Paul Schrader, Walter Bernstein, Jay Presson Allen, and Ruth Prawler Jhabvala.

One of the festival’s other highlights is the Tony Cox Screenwriting Award. "The NFF owes a deep debt to Tony Cox," Burkhart explains. "Tony was a Nantucket resident and an executive for HBO first and then Showtime. He provided his time, wisdom, and experience to help make the NFF the festival it is today." Cox died of a sudden heart attack at age 50 in 1997. Showtime and the NFF wanted to honor his life and career, and so the Tony Cox Screenwriting Award was born. The screenwriter who wins the award is showered with prizes which include case, free travel to attendance at the festival, and, most importantly, a ‘first-look’ option with Showtime for his or her screenplay.

Another grand tradition at the NFF is the staged readings. Unlike some of the bigger festivals where audiences are a mix of executives and marketing professionals who are viewing mostly completed films, at the NFF, writers and directors mingle with real film fans, receiving feedback at the screenplay level. Burkhart hails the staged reading of "Confederacy of Dunces" in 2003 as a success for its director and a unique glimpse into the life of a production for the public. "David Gordon Green [the director] was thrilled with the audience interaction," Burkhart states, "He was surprised with what they felt worked and did not work in the script and was able to make changes based on the feedback. Few audiences, if any, get to experience a movie in its initial stages, that is the writing and rewriting of the screenplay, and it’s not every day that a director of a feature film can get public feedback on a project before it goes into production."

This year’s NFF will also bring well-known actors and celebrities to the island. Guests include Jim Carrey, John Irving, Todd Williams, and the Fab Five from "Queer Eye for the Straight Guy." The guests will participate in panels, the staged-readings, and opening and closing night ceremonies.

While Brad Pitt and the ancient Greeks invade Troy in cinemas across the country, a smaller — though no less prestigious — invasion will take place on the island of Nantucket from June 16-20 as film fans, writers, actors, and patrons-of-the-arts debark to be a part of one of the fastest growing, most highly respected film festivals in the area and the nation. Along with the machines from "The Terminator" and Brad Anderson, the NFF is surely an event on the rise.