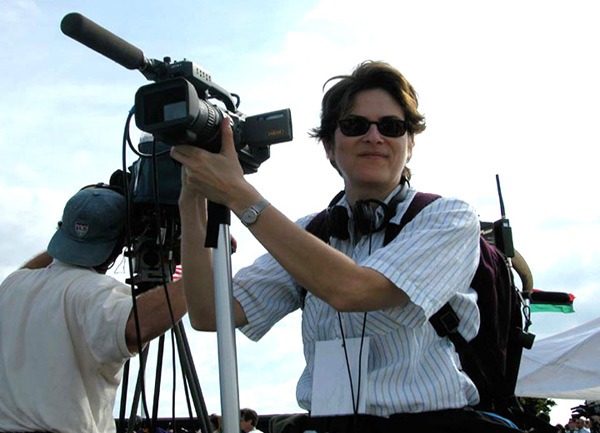 Share
Laurel Greenberg discusses her new documentary, 'Trouble in Paradise,' which explores the state of Florida in the aftermath of the 2000 presidential election, and those who felt burned by the Sunshine State.

The 2000 presidential election left many Americans with a bad taste in their mouth. Most of the nation held their breath, glued to televisions and radios, as ballots were counted, recounted, and discounted, volleying political victory between Al Gore and George W. Bush. The state of Florida was hotter than usual that year, as its voters unwittingly set the scene for an historic national controversy.

"Trouble in Paradise" explores the aftermath of the electoral teeter-totter in the Sunshine State. Documentary filmmaker Laurel Greenberg traveled to Palm Beach County to interview local political activists, members of the NAACP and the ACLU, and outraged victims of the notorious butterfly ballot. What she discovered was a community left reeling by the residuals of a messy election and its suspicious outcome.

One of the few remaining states to practice ex-felon disenfranchisement, Florida can’t seem to decide which of its citizens actually have the right to vote. One of the five primary characters featured in "Trouble in Paradise" is Thomas Johnson, an ex-felon and a pastor who moved to Florida from New York. Johnson, the head of a felon reintegration program called House of Hope, had his voting rights restored in New York, and, by Florida law, should have been allowed to cast a ballot in the 2000 presidential election. Nonetheless, he was ousted from the Florida voting register and forbidden from voting until he was granted clemency from Governor Jeb Bush. Johnson is now listed as the plaintiff in a lawsuit hoping to reinstate the voting rights of Floridian ex-felons, numbering about 620,000.

There were other erroneous ingredients that resulted in this political disaster, most of which were not remedied even in time for the next election in Florida — the 2002 gubernatorial race. Some blame dysfunctional voting equipment for keeping Jeb Bush in office. Others speculate that voters were so disheartened by what happened in 2000 that they declined to vote again. Laurel Greenberg explores all possibilities, capturing the moments of swollen triumph and deflating loss that accompany the pursuit of political justice within a spectrum of scales.

"Trouble in Paradise" is an introspective juxtaposition of kitschy archival beach footage and current political issues; especially timely given that this is an election year.

A still from "Trouble in Paradise."
[Click to enlarge]

SFA: What compelled you to make this film?

Greenberg: I had an interest in voting and voting rights prior to making this film, and then when the country was in the midst of election 2000 I was shocked and horrified like everyone else. But because my parents are retirees in Palm Beach County, I had a particular interest. At first I thought I would just go down and do some investigating, see what I could learn. But once I got down there and started talking to people, started hearing stories, I was even more horrified. And then I got to the point that you get to as a filmmaker; the point of no return. The material became so compelling, the stories became so interesting, the cause so important. I just felt that I had to make the film.

SFA: Election 2000 forced Americans to take notice of the importance of the individual vote. How did making this film change your view of the United States Electoral System?

Greenberg: I knew that presidents are elected by the Electoral College, which I have always felt was a little suspicious. Even more so after making this film. I learned a lot about felons’ rights, or lack of rights. I think there are between six and eight states that still permanently disenfranchise ex-felons. It’s an active issue; there is a lot of work going on not just to try and change the law, which dates back to the civil war, but to help felons go through the clemency process to get their rights restored. There are workshops going on to help people go through the complicated paperwork, help them deal with the bureaucratic nightmare of getting their right to vote back.

I also discovered how susceptible the system is, and how many votes get lost in the shuffle, get miscounted, and just how inaccurate most of our elections are.

SFA: Why did you decide to include nostalgic footage?

Greenberg: When I would talk to people in Florida, they would frequently refer to their surroundings as "paradise." They would even say that they couldn’t let the election "ruin their paradise." So I thought about playing off on the whole idea that Florida is seen by the rest of the country as this kitschy, tropical haven. My co-producer [Jane Newman] and I were searching around for stock footage and we found footage from the ‘50s, ‘60s, ‘70s. Some of these images were so irresistible. I thought they would make nice transitions and at the same time speak to the sort of stereotype that people see in Florida; these waterskiing beauties, the fun in the sun kitschy feel that actually was in contrast to this stuff that was going on there.

SFA: I can’t help but compare "Trouble in Paradise" with other critiques of what happened during election 2000; namely, Michael Moore’s highly inflammatory book "Stupid White Men."

Greenberg: I’ve read parts of "Stupid White Men." Michael Moore is clearly very opinionated. And he comes out with these pretty obvious attacks. I was trying not to be a partisan, as I am as an individual. I did have a point of view; I wanted to show how screwed up things can get, but let people judge for themselves. Not a lot of republicans were eager to talk to me. They didn’t have much reason to be upset with election 2000. But I was trying to present things that let people decide for themselves whether or not the system is horrific.

I do think I had kind of a Michael Moore moment with [Former Florida Secretary of State] Katherine Harris, when she spoke at Harvard’s Kennedy School of Government. You only get to ask one question at those forums; the guest will talk, and then the audience can line up and ask questions. So, we planted a question; my co-producer Jane Newman got in line while I was shooting. We were going to ask her something about the election itself, but we changed our minds and decided to ask her about [the issue of clemency for ex-felons who committed their crimes outside the state of Florida]. She had no answer. I really didn’t expect her to be so stumped. I thought she would dance around it, give some political answer. It was perfect for the way the film worked out. With all the stuff going on right out of her office, that she didn’t seem to be aware of it seems very suspect.

SFA: What do you think will be different for Floridians in the 2004 presidential election?

Greenberg: Florida has been working hard to make changes in their voting equipment, in some of their procedures, the ways they vote. There have been lots of community groups and grassroots springing up to try and make things better. But there are still so many problems. A lot of the counties have new electronic voting machines; there are problems with those. There is in-fighting about whether or not these machines will all work correctly or be subject to fraud. This was all over the country, but in Florida it’s a very heated discussion. They did a lot of things differently for the gubernatorial election of 2002; they had early voting, people can go to the polls a few weeks ahead of time and vote early. There are national groups that are going door to door trying to register voters. It’s going to be tight again, I think. People are making all kinds of horrible predictions about what’s going to happen. Florida is apparently set to purge more voters from the polls because their ex-felon law is still in place. They have to have a way to update the voter rolls, which could be problematic again. The problems have not been solved, and if it’s close again in Florida, people are saying there could be another disaster.

SFA: "Trouble in Paradise" gives a voice to a lot of Floridians, and their respective communities, who went ignored in the aftermath of election 2000. What do you want this film to do for your audience?

Greenberg: I felt that the people that I was talking to didn’t wield the power that caused the mistakes that happened. They were involved in the political process, trying to promote their candidate, trying to follow the rules, however screwed up they might be. I want "Trouble in Paradise" to remind people of what happened in election 2000. I think a lot have people have put it aside, have forgotten, maybe even never knew some of these interesting details. Florida is a really important state in terms of the political scene these days. It’s almost equally divided between Democrats and Republicans. There are 27 electoral votes and the population is growing, so there may be more in the future. I want people to get a sense of politics, to see how people in Florida are putting their energy to making change at a very basic level. Sometimes it works, sometimes it doesn’t. Sometimes you have to work a very long time so you can get change to happen. The film gives a sense that the political system kind of rides on the back of little volunteers, all at the base. I want the audience to see how ordinary people can take things into their own hands.