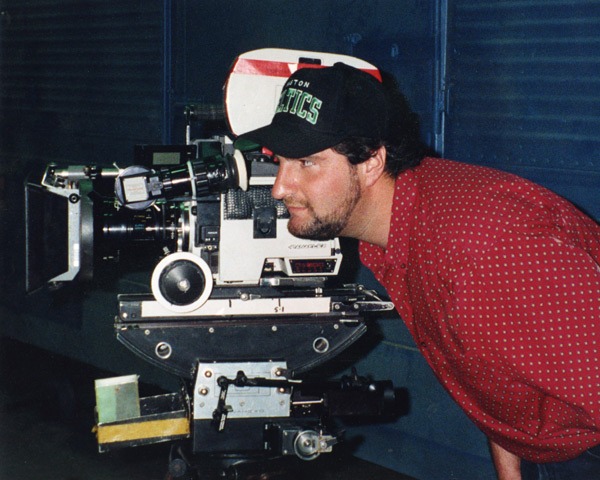 Share
Writer/Producer Steven Feinberg leaves Hollywood and comes back to Rhode Island to head up the state's film office, hoping to merge the two vastly different film worlds into a filmmaker’s dream-come-true.

Steven Feinberg started making movies in his Cranston, Rhode Island basement when he was eight years old. In his teens, he dreamed about going out to California to pursue movie-making on a larger scale, and at 18 that’s exactly what he did, traveling across the country to attend the USC School of Cinema. He has since been able to cultivate a successful career as a writer and producer in Los Angeles; starting his own production company, writing a number of films, and working on a few television programs that are close to production.

Now at age 40, Feinberg realizes that home is where the heart is, and that is why he left a life in L.A. that most would envy, to return home as the new director of Rhode Island’s Film and Television Office. NewEnglandFilm.com caught up with Feinberg to find out why he is "happier than ever" promoting film and television in the Ocean State and why he’s bringing a little bit of Hollywood back with him.

EL: Was it a hard decision to leave a town where most people are involved in the entertainment industry in one way or another, and come to the smallest state in America to convince filmmakers that Rhode Island deserves their attention?

Feinberg: Not really. I am very passionate about movies and television and storytelling, etc., but there is something to be said about diversity. Diversity was lacking in Los Angeles for me. When everyone is going after the same goal, and the conversations are about the same thing over and over, it gets stale. Don’t get me wrong, I can and will talk about movies all day and all night. It’s just that when you have so many people jumping into the pool, you’re not sure who can really swim and who can’t. There are a lot of pretenders, and that gets old. Also, when everyone is doing the same thing, it’s difficult to get fresh ideas. Fresh ideas come from life. The real world. If everyone is a filmmaker, then who are the stories about? When I meet someone who is not in my field, that’s when I get really interested.

The other thing about L.A. is it is a transient place, and it’s overexposed. Rhode Island, on the other hand, is deeply rooted in family and traditions, and it’s underexposed as far as I am concerned. I’ve always been nostalgic about Rhode Island. I love it here. It’s always been home and it’s a beautiful place…filled with locations that no one has ever seen on film. To me, that’s exciting. And that’s simply one of the reasons why filmmakers should come and shoot here.

Feinberg: Well, for one thing, I see the L.A. film scene as Hollywood, or trying to make it in Hollywood. When I think about the Rhode Island film scene, I see hungry filmmakers. L.A., in my mind anyway, is about the mainstream motion picture business. It’s more corporate. Here in Rhode Island, I see people making movies for $2,000, $25,000, $50,000, and $500,000. They are not waiting for permission here. That’s the difference and again, that’s the beauty. Looking back on part of my L.A. experience, I see a filmmaker who was often waiting for permission to make a movie because I was caught up in the mainstream motion picture business. Let me give you an example. Let’s say I want to make a movie. I spend a half-year writing a spec screenplay. I then give my spec to my agent at CAA (Creative Artists Agency). He loves it. He sends it around Hollywood. A star’s creative executive loves it. Meets with me. Has a couple of comments. I make the changes. It sells to the studio. What happens next? The studio gives notes. We make changes. And wait…and wait…and wait…and then the star wants to bring another writer aboard to get a fresh take on the material. That’s what happens…if you’re lucky!

It doesn’t work that way in Rhode Island. You write a script. You get what and who you can, and you go and shoot. It’s raw. That’s the way it should be. That’s what I call guerilla filmmaking. That’s the Rhode Island way. And to me, it’s the best way. Don’t wait for permission. Just do it!

EL: You now have the power to affect filmmaking in Rhode Island in a very positive way. What goals do you have for film production in the state of Rhode Island over the next few years?

Feinberg: Ultimately, I would like to merge the two worlds that I just described. I want to bring the professionalism of well-trained filmmakers here to help develop that hungry and passionate filmmaker who loves where he is living and who is passionate about a personal story. Combine those two groups of people and we’ve got an opportunity to create magic. That’s my dream. That’s what I am going after. That’s my mission.

By combining these worlds, I want to create a thriving motion picture and television community. I see my job as three-fold. Number One: I am working on bringing out of state productions to Rhode Island. Number Two: I must facilitate a motion picture production when it is here and help that production get the most bang for its buck. Number Three: I must raise the level of local filmmaking and help native Rhode Island filmmakers maximize their potential. That means they need to be integrated into the film community, both locally, and on a national level.

EL: Does this take away from the goals you have as a writer/director/producer?

Feinberg: Absolutely not. I have my own stories I want to tell on film, and I intend to follow those goals. I may put my personal pursuits on the backburner for a year because right now I need to focus all of my energies on this new position. What I am trying to do is create a foundation for all filmmakers. I want the film and TV community to be able to accommodate huge outside productions as well as smaller local productions. That means making sure we have the equipment, the talent, the tax credits, etc.. everything in place… to ensure we are maximizing the potential of Rhode Island’s filmmaking scene. When I get that in place, I’ll be ready to jump behind the camera again.

EL: Rhode Island is most likely not at the top of the list when it comes time for a filmmaker to choose a location. Why should people come to Rhode Island to make their films?

Feinberg: Because it’s unique and we have a great backlot. If you want mansions, we’ve got them. Do you need cobblestone streets? We’ve got them. You need a farm? We’ve got it. You need unique architecture? We’ve got it. Rhode Island is a superb backlot, and production moves don’t cost anything because we are the smallest state in the Union. If a crew needs to move from one Rhode Island location to another, that’s not a problem. Most likely, the move will take about 10 minutes. Someone once said, rush hour traffic in Rhode Island only takes eight minutes. I love that line. We are also film-friendly, and the state is filled with many talented artists who are ready and able to assist a production. Come to Rhode Island, and you can’t lose.

EL: For all those hoping to break into the business, how did you get your first break in the industry, and what opportunities are there in Rhode Island for young (and older) hopefuls who want to find that same break?

Feinberg: I got my first break when I made my first movie. I say that because I had fun making my first movie and I believe, overall, you make your own breaks. You can’t wait for someone to give you a handout. You have to do it, and have fun doing it. When you’re having fun that translates on the script or on the screen. It becomes contagious. Anyone can make a break for themselves. Just do it. And don’t look back.

EL: Glad to be back?

Feinberg: I am so happy to be home. Even though I was in L.A. for 22 years, I never called it home. There’s so much to love about L.A., and I have some amazing friends and family there too. But my heart has always been in Rhode Island, and now my feet are planted here too. I am very excited about this opportunity because I am marrying my two loves: Hollywood and Rhode Island. I get to stay grounded in the Ocean State and develop the talent here, but I will also be journeying to L.A. for a week at a time to rally my Hollywood film friends. It’s the perfect scenario, and I look forward to seeing the magic that develops by combining two unique worlds!