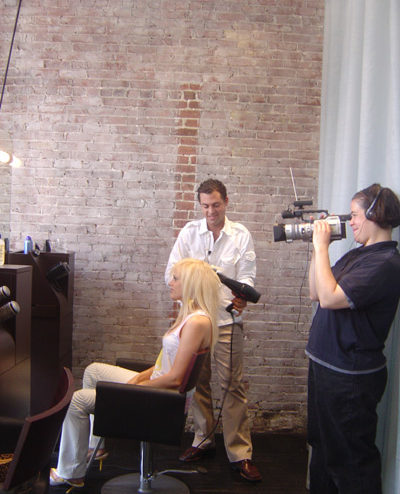 Share
Boston TV producer Kathryn Shehade debuts a new series called 'The INdustry,' which offers a behind-the-scenes look at the stress, sweat and sometimes tears of those who make it all happen in the entertainment field.

Anyone who has worked on a film or video shoot, a stage crew or in a restaurant kitchen can tell you that it’s hard work, dirty, tiring and often thankless. The bright lights and the accolades don’t necessarily find their way backstage at the end of the performance. If you have held any of those jobs, Kathryn Shehade knows what you’ve been through and she’d like to show the rest of the world. In her new TV series "The INdustry," her mission is to strip away the glamorous façade of the entertainment business.

Part documentary, part reality show, part talk show, Shehade hopes "The INdustry" will be illuminating and entertaining. The format of the show is to use a mix of segments to cover the topic.

"There is a host who welcomes the audience, there’s one main feature segment and then there’s me as the producer taking out the experts as friends — we sit in a casual atmosphere and talk," Shehade says. A segment called "IN the Biz [features] someone in the know who gives a rundown on what’s going on in this industry right now," says Shehade. Finally, a favorite piece for Shehade is a "stress reliever tip for that show — something that is particular to that industry, such as a yoga move or a relaxation exercise."

The first program is about the beauty industry and features a model as she prepares to walk the runway at a fashion show. Shehade says she found model Michelle Impemba through an agency and filmed her working at the Betsy Johnson Fashion Show at The Rack in downtown Boston. According to Shehade, she and the crew saw the rough side right away.

" [Impemba] was late and she was yelled at. The stylist said her hair was too fine to tease. She was near tears and we found out it was her first runway show." Contrary to the image of the model sitting in a chair and being primped by hair and make-up artists Shehade says, "There was a line for make-up and the models were drinking glasses of wine at the open bar to calm their nerves."

Impemba, who is an attorney as well as a model, says that despite the demands of the day it was "a great experience" for her. "While being followed around by a camera crew is something very new to me, I still felt very comfortable with allowing the public to have an inside view into my professional life. As a full-time lawyer, there is a great deal of scrutiny involved with my profession, so that made the project a little easier," Impemba says.

On the set of "The INdustry."
[Click to enlarge]

Episode number two features Chef Bill Bradley of The Rustic Kitchen restaurant in Boston. According to the producer, viewers will see a beautiful plate of food arriving at the table and then "Re-wind tape, we’ll see the waiter putting in the order for duck and the chef complaining about the order because they are out of duck, then sending someone out to buy it. Meanwhile, the customer is wondering why it’s taking so long!"

"I’m so pleased with the subjects of the first two shows," says Shehade. She was honest with people in asking them to participate. "We show the finished product as terrific, but I wanted to show what it takes to get to that point." She told her participants that "I want to show the things that go wrong. It was a matter of finding the right people who aren’t afraid of that." By and large, she says, "I was talking to people who want some credit for what they do."

Shehade has been an entertainment publicist for many years and leads her own public relations firm in Boston called K4inc. At the start of her career, she says, it was glamorous. "You’re staying in luxury hotels and meeting the best chefs and then, after a while, you just want to go home and sleep in your own bed and eat some home-cooked food."

Shehade’s story of getting "The INdustry" made is a lesson in persistence. She had the original idea for the program four or five years ago. "As a publicist I am always talking about ‘the best’ and [for this] I want to expose the rest." She developed the premise and began shopping it around to several networks. She soon discovered that the road from idea to production was going to be longer than she imagined.

"What I found out is that it’s hard to go from point A to point B. Programming people change, so you have to go back and start over with the new person." Throughout the process she remained loyal to her vision of filming in Boston. "I’m from this town and I wanted to give attention to our city," she says. She uses a local crew, headed by director Jim McKeever, and uses her many contacts in the city for venues and guests.

When the day of the first shoot finally arrived it was a sweet moment for the creator, "This was mine," says Shehade, "It was a surreal feeling, but it was wonderful." She and her crew shot two shows in one day and the adrenalin was flowing. "I thought, ‘let’s go, let’s do this’ — the time flew by." Although it was Shehade’s first time as a producer, Michelle Impemba says, "Working with Kathryn and her crew was great. Kathryn was friendly, personable and professional."

At the time of this interview the producer was still in the final stages of editing. "I’m really pleased with how it’s coming out," Shehade says. "I’m telling the story I want to tell." Future plans include shows highlighting the music industry, theatre and sports. At press time, Shehade was in negotiations with several networks. "It’s not a mean show, by any means, but it is a raw show," says Shehade. "I want to make sure my platform for the show is correct."

With the current spate of "reality TV" shows filling the schedule, the time may be just right for a hybrid like "The INdustry" that offers a view of someone else’s work life along with some practical information and a salon-like discussion with industry professionals. Shehade hopes that by de-mystifying the work behind the glamour will allow the audience to connect with the program. "Everything we do is just a job," she says. As the show’s debut gets closer, the creator is optimistic. "I think it will be received well," Shehade says, adding that she hopes to build upon its local success to find a national outlet in the future.