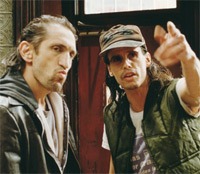 Share
Longtime screenwriter and first-time director Dennis Brooks discusses his new feature film 'Goodnight Joseph Parker,' showing at the Independent Film Festival of Boston, and why it will be his last.

After the soul-wrenching experience of shooting "Goodnight Joseph Parker" and three hell-raising years of lawsuits and post-production, Dennis Brooks vows never to direct a film again. For our sake, let’s hope he changes his mind: "Goodnight Joseph Parker" is a brilliant gem of American independent filmmaking and promises to be a highlight of this year’s Independent Film Festival of Boston.

Brooks, a Tufts graduate and accomplished Hollywood screenwriter, developed the idea for "Goodnight Joseph Parker" as a thesis play for his MFA at UCLA’s School of Theater, Film, and TV. After languishing for years, Brooks resurrected the script, now as a screenplay, with the encouragement of his friend John Leguizamo. "John read it and said, ‘You’ve got to make this film.’ Within a month I had a million dollars and Paul Sorvino, Richard Edson, and Debi Mazar signed on to do the project."

The speed with which the financing and casting came into place might seem like magic from Hollywood yesteryear, but Brooks left no room for error. "I called up the actors and arranged for them to come to my house on a Saturday night for a read-through. There I basically ambushed them with a party: about a hundred people, catering, the works. The actors were surprised and the read-through went wonderfully: everyone was laughing at the jokes and the atmosphere was terrific." Brooks also cites the actor-friendly script as a big draw. "You got to understand that [character actors] like Paul Sorvino usually get 50 lines in a whole movie. In my script he had 50 lines on the first page."

With Sorvino and the others on board Brooks acquired financing very easily through his business network. Then came the hard part: actually making the film. Although Brooks had years of experience in the industry as a screenwriter and had directed a plethora of plays, he freely admits he was a novice when it came to filmmaking.

"I knew nothing. I did my best to slowly build up a crew that had an idea of what they were doing." Still, when asked if he was intimidated by working with actors who had previously been directed by the likes of Martin Scorsese, Spike Lee, and Jim Jarmusch, Brooks proves fearless. "It didn’t cross my mind. I had directed so many plays and knew this script line by line, so I didn’t even think about it."

Indeed, Brooks’ inexperience behind the camera actually may have worked to his advantage. "Because we had no clue we basically invented a new kind of filmmaking, which was spending half the day with the actors making it perfect, and then the second half was the actual shoot. The crew hated this of course: they were just waiting around all day and then had to do all the set-ups very quickly, but the acting was perfect because of it, and that was my main priority."

Brooks’ attention to acting, and his theater background in general, comes through very clearly in the finished film. "It’s a very ‘stagey’ film and that’s exactly how I wanted it. Acting and authenticity were always my top concerns. Those were all real tears — I didn’t have any eye drops or make-up. Everything in that film was real." "Goodnight Joseph Parker" thus continues a tradition of "theatrical" filmmaking whose recent examples include "Albino Alligator," "Hurly-Burly," and much of David Mamet’s work in film.

"Goodnight Joseph Parker" takes place in a run-down dive in New Jersey called "Charlie’s Bar & New Crystal Ballroom." It’s a townie pit populated with the burnt-out and restless, a set of hopeless losers without a future. Joey Parker’s surprise return to "Charlie’s" as an acclaimed crooner who says he knows Frank Sinatra and is set to appear on Jay Leno wakes up the drowsy scene. He’s intent on marrying the girl he left behind, but he sets off a chain reaction in the town along the way.

A still from "Goodbye Joseph Parker."
[Click to enlarge]

"Goodnight Joseph Parker" succeeds above all as a milieu study and atmosphere piece. The film exudes an ambiguous historical quality — for example, a soundtrack from the 1950s, 1970s, and 1980s and costumes that transcend easy classification — which Brooks calls his desire for "timelessness." Brooks’ careful sense of color, lighting, and costume contributes to a striking aesthetic and a stark mood. "We built the entire set. It cost us a lot more than just shooting in a bar, but I wanted to get all the details right. I wanted this to be real life. I spent so much time just getting the colors right. Every color in the film is from me."

To further emphasize the atmospherics Brooks consciously employed a more restrained camera. "I wanted to shoot this very conventionally. Too often you see so many clichés in independent films: shooting from a strange angle or some weird tracking shot. I didn’t want to distract from the acting — I wanted [the camera] to be like someone standing right there in the bar."

Of course a movie production doesn’t end with the camera, and it was at this point that Brooks’ major troubles began. "There were some things that I wasn’t used to during the shoot, since I came from the theater. Things like all the people around for very emotionally intimate scenes or all the deadlines." It would be after the shooting, however, that things went seriously downhill. Brooks was rushed through the initial editing process and wasn’t at all pleased with the product. He then got bad advice to sell the film for international distribution, which led to a series of lawsuits and even death threats. "The process of making this film was a nightmare. I went through hell for 10 years. Something like this is what makes you hate people."

Nonetheless, Brooks is proud of the finished product. In the end, after all of the legal wrangling and countless hours in the editing room, he made the film he had intended. Still, when asked if he might now consider another try behind the camera, Brooks remains firm. "Never. Never would I do what I did and be director, producer, and everything else all at once."

Here’s hoping he changes his mind.