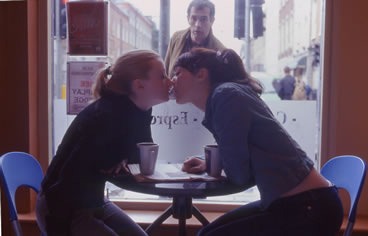 Share
Reviews of three features and a selection of shorts from the 20th Annual Boston Gay & Lesbian Film/Video Festival, coming to the Museum of Fine Arts, Boston, May 12-23.

Tom (Sean Campion) is the kind of smarmy, pathetic literature professor who sleeps with students at the rate some people go through cigarettes, using the same tired lines every time. His current flame is the smoldering Clara (Fiona O’Shaughnessy), but she’s about to be replaced by cool-as-ice Isolde (Fiona Glascott). Meanwhile, Rosie (Lise Hearns) is having a tough time sparking any interest from her live-in boyfriend David (Peter Gaynor). Maybe that’s because he’s in denial, unable to admit that he’s got the hots for gay bike courier Red (Keith McErlean).

A chance encounter between Red’s best friend Angie (Flora Montgomery) and Clara sets off the gender-bending fun of writer/director Liz Gill’s "Goldfish Memory," a light-hearted romantic comedy set in Dublin that plays like a marathon match of spin the bi-bottle. Ensemble comedies can come off as too-cute or contrived, but Gill plays her cards like a pro, and the result is a charming romp of a film.

If the U.S. were a little (okay — a lot) less homophobic, this film would be the smash hit of the year. No kidding, "Goldfish Memory" is a real winner. Other than the assumptions that 80% of us are bisexual (an assumption many might secretly or openly agree with) and willing to ignore our inhibitions and explore that bisexuality (an assumption I’m guessing is a bit of a stretch), this film is entirely accessible. Someone strap Rick Santorum to a seat and make him sit through this one. God help him if he can’t at least crack a smile. ("Goldfish Memory" is the Women’s Opening Night feature, Thurs., May 13, 8 pm, with reception to follow.)

"Rise Above: The Tribe 8 Documentary"

It’s not every day you get the chance to see a documentary about an "all-woman, all-queer punk band," let alone the first band of its kind. Anyone who has ever let the riotous spirit of rock-and-roll ever inhabit her or his heart for a time should consider "Rise Above: The Tribe 8 Documentary" an absolute must-see. Tribe 8, in all its brash vulgarity, its hilarity and anger, channels the fuck-it-all rebelliousness and organized loss of self-control that empowers the greatest of rock music and makes it culturally significant.

Flannigan’s documentary delves deeper than the band’s harrowing live shows (depicted here in all their frenzied, topless, dildo-wielding glory) to explore the bandmembers’ personal histories and inner demons. Gender confusion and oppression, sexual inhibition and release, drug and alcohol abuse, race relations, family dysfunction, teen angst, rape, death — virtually no wound goes unopened in Flannigan’s inquisition. Of all artistic mediums, few wield the overwhelming immediacy of rock-and-roll: Love ’em or hate ’em, Tribe 8 make you stop and think and feel. And the interviews in Flannigan’s film add a richness and complexity you just can’t get from the primitive live shows. Both disturbing and thought-provoking, this movie will blow you away. Don’t miss it. (Director Tracy Flannigan and Tribe 8 band members Lynn Breedlove and Leslie Mah will appear at the film screening Sat., May 15, 8 pm. Lead vocalist Breedlove will read from her book Godspeed.)

Who knows what capers have been hatched in the Hollywood hills to avoid such a headline as "Homo Star Arrested in Perv Palace"? In writer/director Richard Day’s "Straight Jacket," movie star Guy Stone (Matt Letscher), beloved by ladies across the globe and by a different L.A.-area man every night, finds himself forced to marry in order to protect his reputation and his film career. Nowadays, being exposed as a homosexual wouldn’t necessarily be so bad — any news is good news, as the saying goes — but this is during the McCarthy-era 1950s, when being denounced as a homo will naturally progress to being denounced as a homo pinko-commie. And then you’re done for.

So when Guy gets caught at the local gay bar, his manager and studio boss kick the publicity machine into overdrive the best way they know how — by announcing his marriage to lucky studio secretary Sally (Carrie Preston). She, of course, is clueless to the whole plan, including the part about Guy being gay. Things are rolling along for our newlyweds at a barely endurable level of misery when the unexpected happens. Guy falls in love. Clearly taking its cues from the life and films of Rock Hudson, "Straight Jacket" is the flip side of the recent Renee Zellweger / Ewan McGregor vehicle "Down With Love," with a lower budget and better jokes. The performances are generally solid, and Day shows a deft comic touch throughout. "Straight Jacket," an amusing but gentle look at the queer side of show-business, is sure to win more than a few chuckles. Worth a look. ("Straight Jacket" is the Closing Night feature, Sun., May 23, 7 pm, with director Richard Day present and reception to follow.)

Highlights among the short films include "Seventy," in which two old friends — one gay, one straight — meet to celebrate their 70th birthday with surprising results, and "Gaydar," in which a lonely gay office worker finds a magic homosexuality-detector gun at a yard sale and decides to find out which way his dreamy co-worker swings his bat. In a true stroke of casting genius, the co-worker looks and acts one heck of a lot like Tom Cruise.

Other films in the schedule include Ian Iqbal Rashid’s multicultural romantic comedy "Touch of Pink"; Dee Mosbacher’s "Radical Harmonies," a chronicle of 30 years of women’s music; Sara Millman’s lesbian Bonnie and Clyde "Robin’s Hood"; Joan E. Biren’s documentary "No Secret Anymore: The Times of Del Martin & Phyllis Lyon," about the founding mothers of the modern lesbian civil rights movement; Abigail Honor’s documentary about a Catholic gay couple’s quest to get married, "Saints and Sinners"; Crayton Robey’s look at the 50-year history of Fire Island Pines "When Ocean Meets Sky"; stand-up sensation Margaret Cho’s "Revolution"; Andrew Davies’ lesbian love story "Tipping the Velvet"; Ruthie Shatz and Adi Barash’s "Garden," about young gay prostitutes and drug addicts in Tel Aviv; Sébastien Lifshitz’s "Wild Side," about a transsexual who returns home to care for her dying mother; Ferzan Ozpetek’s "Facing Window"; David Gleeson’s "Cowboys and Angels"; Cecilia Neant-Falk’s "Don’t You Worry, It Will Probably Pass," a documentary about teenage girls who suspect they are gay; Alexander Sokurov’s tale of a "Father and Son" who are perhaps spend a little too much time gazing into each others’ eyes; Q. Allan Brocka’s love rectangle farce "Eating Out"; and Darren Stein and Adam Shell’s "Put the Camera on Me."