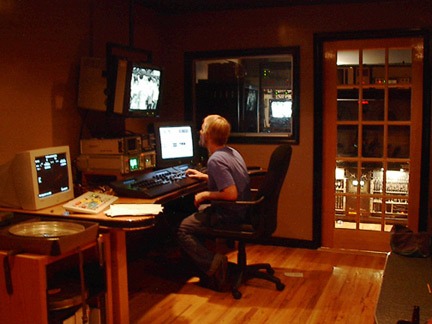 In January 2004, after close to 30 years of operation, the Boston Film/Video Foundation quietly closed its doors. It was a sad ending for the once-venerable media arts organization where literally thousands of aspiring New England area filmmakers had first looked through the lens of a movie camera and felt its power take hold of them. But losing the Boston Film/Video Foundation meant not only losing the master classes, workshops and screenings the organization offered; it also meant losing that sense of community and support for filmmakers that the BF/VF had nurtured over the course of its 28-year history. It seemed an unthinkable demise for an organization that helped put the once-fledging Boston-area film community on the map as a center for innovative filmmaking and independent film production.

Founded in 1976 by a group of Boston and Cambridge-area filmmakers who wanted to create a place "that would provide an organizational support system to artists for the understanding and creation of independent film and video," the Boston Film/Video Foundation quickly became a multi-purpose community center/school/support center for thousands of aspiring and seasoned filmmakers alike. The organization’s reputation spread until it eventually became recognized as one of the leading media arts centers in the Northeast. But like so many other cultural organizations have also realized, the BF/VF simply couldn’t survive the region’s weakened economy and the deep budget cuts most arts institutions have had to deal with over the last few years. So just after the first of the year, the group’s board of directors made the difficult decision to dissolve the organization.

But just as a sad sense of resignation regarding the fate of the BF/VF had start to set in, filmmaker Rob Patton-Spruill came forward in February to save the organization and its mission from dying altogether. Feeling disheartened by having seen so many other storied arts institutions close their doors in recent years, Patton-Spruill made a decision that he had to "stop the backslide," as he describes it. "The BF/VF is a big piece of Boston’s filmmaking history. It just meant too much to so many people, myself included. I simply couldn’t let it be gone forever."

Patton-Spruill’s own career represents an important part of New England’s filmmaking history as well. In 1995, the then 24-year-old Patton-Spruill burst onto the scene as the writer/director/producer of the feature film "Squeeze." The film, which sold to Miramax for the then-unheard-of sum for an indie film of $1 million dollars, was a real coup for the Boston area’s film community. It forced the film industry to suddenly sit up and take notice of what else might be happening in the region. "It was a heady time," reminiscences Patton-Spruill. "In the mid-90s there were a lot of films being made all over New England. It really was a great time for local filmmakers."

Patton-Spruill parlayed his "Squeeze" experience into directing several Hollywood features, but ultimately found working for the Hollywood system dissatisfying. What Patton-Spruill really wanted to do was continue to make films in and around Boston, where he grew up and continued to live, while at the same time support the growing community of local filmmakers struggling to get their own films made. He wanted to provide them with some of the resources needed to realize their vision. So in 2000 he opened the FilmShack production center. Housed in a renovated industrial building in Boston’s Roxbury neighborhood, FilmShack set out early on to be a production house focused on the indie filmmaker with big ideas and a small budget. And while staying true to its earliest mission, FilmShack has since evolved into a successful full-service state-of-the-art production house for both indie filmmakers and commercial clients.

As with so many members of the New England filmmaking community, Patton-Spruill’s interest in the Boston Film/Video Foundation goes back many years. "As a young filmmaker in the early 1990’s, being shown at the BF/VF’s New England Film Festival was something that really meant success to me," says Patton-Spruill. "The film festival was half the inspiration that kept so many of us going back then. For me and a lot of other folks, it’s what kept you working late at night, trying to finish your film. It was something to aspire to."

Robert Patton-Spruill on the set of his hit film "Squeeze."
[Click to enlarge]

When Patton-Spruill and Patricia Moreno, his wife and business partner, first approached the Boston Film/Video Foundation’s board of directors about transferring the organization’s assets, the idea was to try and continue the tradition of the BF/VF and build on the many successes the organization had during its long history.  "I was interested in wanting to create a new organization that would build on all the great things about the BF/VF and expand on that. I want to create a place where you can hang out and create synergy. A place where you can meet other people into the same thing," says Patton-Spruill.

Patton-Spruill’s new organization will be called the Boston Educational Film and Video Association, or BEFVA. The name change came about not only because he wanted to put his own stamp on the organization, but also because Patton-Spruill believed the word "foundation" in the BF/VF’s earlier incarnation was a misnomer in some ways.

"It gave some folks the mistaken impression that there was money there. It was never a foundation in the sense of having lots of funds to give away. There was never any real financial backing. It was confusing." Patton-Spruill feels as though replacing "foundation" with the word "association" will more accurately reflect what the organization will be and do. He also believes it sends a signal that he is responsive to the community.

"There are so many different people with different needs and wants," he says. "We’re hoping BEFVA will be able to address many of those needs." And he makes clear that as with the BF/VF, education will remain an important part of the new organization’s mission as well. "Education is a huge thing to focus on," he says. "We’d like to see BEFVA ultimately be a place where local colleges can have students take accredited film classes. It’s something I’m hopeful of, but only time will tell what it will ultimately grow into."

As Patton-Spruill stressed, an important piece of the original Boston Film/Video Foundation was the organization’s annual New England Film Festival. As the premier festival recognizing the achievements of New England filmmakers, it’s played a critical role in maintaining the region’s reputation as home to many gifted filmmakers. BEFVA’s ownership of the NEFF is not one to be taken lightly.

"I’ve never run a film festival," admits Patton-Spruill. "But I  do have a base level of understanding; enough to know that the New England Film Festival as it exists, as good as it’s been, needs to be revamped." he says. "I want to make the event more festive. I want it to be a true celebration of our work."

One big change to the NEFF that Patton-Spruill has already instituted was to move the Festival permanently from April to October. As he says, "It feels as though it’s a better time of year for the film industry. People seem more excited, enthusiastic, and revved up about things." Patton-Spruill says that long-term NEFF exhibitors are definitely still behind the film festival and want to see it continue. "The MFA, Brattle Theater, and the Coolidge have all expressed interest," he  says. But in a departure from tradition, Patton-Spruill would ultimately like to take the film festival on the road. "I think it should play in every state in the region, to give audiences all over New England a chance to see the films," he says.

In what can only be described as an inspired decision, Patton-Spruill has brought on successful business executive E. J. Walton to serve as BEFVA’s non-paid executive director. With a Harvard MBA and a wealth of experience in managing for-profit companies, Walton may seem at first glance like an unusual choice to manage an arts organization. But Patton-Spruill realized very quickly what a tremendous asset Walton would be.

"I wanted someone from the business world to be a guiding force behind BEFVA," says Patton-Spruill. With BEFVA’s planned classes and a school, as well as producing the New England Film Festival, Patton-Spruill has high hopes that Walton will bring financial stability to the organization, even in a time of meager funding for the arts. "E.J. Walton has a long-standing interest in film, he’s written several screenplays, he has a history of being involved in theater and the arts, and he’s a successful businessman. What could be better?" says Patton-Spruill.

For his part, E.J. Walton has some very interesting ideas about managing BEFVA as well. "I’m very excited about this opportunity," says Walton. "My primary goal is to create a solid foundation for the film community. That means keeping a balance between the creative and the fiscal, so that the mission of BEFVA cannot be compromised. We will pursue all the programming that the BF/VF presented in addition to other new, innovative programs, including a dramatic screenplay development project that will clearly demonstrate the collaborative nature of film."

Another interesting idea Walton has in mind is to create a "movie of the month club" where BEFVA would help a small group of filmmakers to create a short film every month and then screen the finished work. "We want people to move out of the mode of thinking about film to actually making movies," says Walton. "The New England area film community is so rich with creativity. It just needs an entity to lead the way. Rob and I both believe that the Boston Educational Film and Video Association can be that entity."

Patton-Spruill sees his taking over the BF/VF and founding BEFVA simply as a continuation of his demonstrated commitment to strengthening the New England-area film community. "I’ve always believed in supporting struggling organizations and struggling filmmakers. I took chances on producing folks that no one else would," says Patton-Spruill. "And some of those filmmakers are now among the most-recognized in our area." he says. "I get a lot of joy in seeing a vibrant community. Besides, I simply have too much at risk to have it not succeed," says Patton-Spruill. And with the hopeful anticipation of the local film community behind him, no doubt he will.