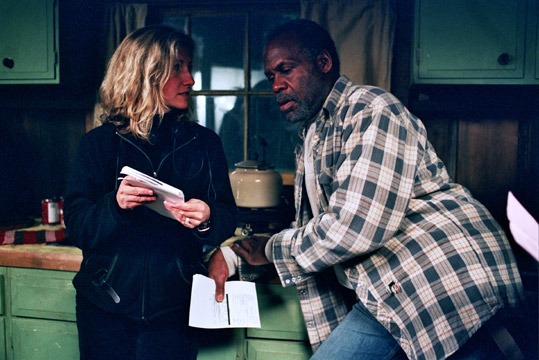 Share
A practical how-to guide to filmmaking, inspired by an interview with first-time writer/director Gabrielle Savage Dockterman about her film 'The Woodcutter' starring Danny Glover.

Officially, Gabrielle Savage Dockterman has invested three years in her directorial debut "The Woodcutter," a tale about reclusive Vietnam veteran Jake Neely (played by a commanding Danny Glover) who becomes the unwilling guardian of an abandoned child. Unofficially, Dockterman’s journey began nearly eight years ago with a bold career change.

1. Venture off the beaten path and down the "long road."

In 1996, Dockterman reigned supreme in her professional niche. She was a decorated producer, director and writer of interactive video and television who led the charge using interactive media for such notables as the Smithsonian Institution, the National Science Foundation, and the U.S. Department of Education. Accustomed to "using stories to engage people," she decided to pursue film. By year’s end, this Harvard graduate with a degree in engineering/computer science found herself swimming in script submissions. She optioned a "sweet story," worked with the writer full-time for six months, but walked away from it because she realized she was "trying to make it into something it wasn’t." Next she turned introspective, penning her own "dark, very personal story" titled "Numb." That, too, was shelved. The search was on again, except now she knew precisely what she wanted: "a powerful drama with unforgettable characters."

2. Add a pinch of Providence.

While sifting through a fresh stack of scripts, Dockterman recalled one story from the initial pool. While she loved the tale, the script’s potential eclipsed its merit; it was too long for a short, not developed enough for a feature. And two details escaped her: its title and its author. Providence intervened just two weeks later, when that author, Washington state native Ken Miller, again responded to her call for stories, this time with a new premise that caught her eye. Dockterman and Miller, along with writer (and fellow Carlisle, MA resident) Nancy Babine, formed a trio and collaborated, largely over email, to shape the screenplay. As they worked to develop the plot, they had only the occasional skirmish. Dockterman, for example, rallied for the young girl whom Jake takes in to be Amerasian, which Miller, himself a Vietnam veteran, initially vetoed but ultimately embraced. The script is truly a patchwork of three minds: "When we all agreed, we knew it was something special."

Dockterman attended the 2002 Sundance Producer’s Conference, project in tow. During one of the breakout sessions — mover-and-shaker panelists within a small group — another attendee introduced himself as "a writer/director/producer." Barbara Boyle, Chair of the UCLA Department of Film, Television and Digital Media, quipped, "So you can’t decide what you are." "I’m a writer/director, and a producer by necessity," he qualified. Dockterman took what Boyle said next to heart: "Find someone who produces because that’s what they really want to do, and partner with them." Dockterman interviewed producers in both New York and Los Angeles with an eye for a company with passion for the project that would make it a priority, not one of many projects languishing in development. She partnered with Isen Robbins and Aimee Schoof of New York’s Intrinsic Value ("XX/XY," "Anything But Love," "Brother to Brother"), who have had five projects at the Sundance Film Festival in as many years. The behind-the-scenes team was assembled, but the spotlight remained glaringly empty.

4. "It’s almost impossible to make a successful film anymore with no-names. It has to be so different and almost wacko to get noticed without names."

With "zero interest" in making an independent film with unknowns, Dockterman welcomed an introduction to New York casting director Adrienne Stern in December 2002. At the 2003 Sundance Film Festival, the team drafted a short wish list of talent, topped by Danny Glover. That week, in the audience at Glover’s screening at the Eccles Theatre, fate struck again. When he strode into the room, something clicked for Dockterman: "He had such a presence that I just knew he was Jake. I can’t even describe it. In person he was so charismatic… He was the one." Luckily, Stern had a contact at his agency, and after weeks of patience as the script crept up the rungs of the agency’s ladder, Dockterman finally heard the words: "He likes it. He’d like to do it. How flexible are you on schedule?" She postponed the shoot six months — until November 2003 — to accommodate Glover, a gesture that paid off.

Suddenly, agents and managers greeted the project with interest. The script offered actors a challenge, and certainly "Danny was a big draw." Soon Linda Hamilton and David Strathairn (once a New Englander himself as a student at Williams College in Williamstown, MA) were attached to the project, as well as Ron Perlman, who accepted the role only after Dockterman rewrote his character, inspired by a creative discussion with the actor.

Finding a feisty 12-year-old to play the Amerasian daughter of Jake’s former platoon member (who mysteriously appears only to vanish overnight, leaving her behind) proved daunting: "It was a horror story or a miracle, however you want to put it." Even with casting directors "scouring the continent" in Canada and the States, Dockterman still didn’t have the girl on the eve before leaving for Vancouver (despite an eleventh hour casting session thrown together as a favor by Beverly, MA casting director Peter Berkrot of New Voices-New Visions). Borrowing a page from Dockterman, Berkrot soldiered on in his search and called a few weeks later to announce, " I found her." Homegrown talent Zoë Weizenbaum of Amherst, MA impressed Dockterman in a teleconferenced audition and was cast the day she auditioned in Vancouver. The fledgling actress boasted only three community theater productions, but Dockterman, with less than a week to go before rehearsal, was willing to take a chance on a promising prospect.

Dockterman’s pre-teen gamble proved her mettle in the first week of shooting when a scene required her to cry on film — a first for her. Just before the cameras rolled, Dockterman instructed: "You don’t have to cry. I don’t want fake tears. Get yourself in a space emotionally. If they come, great. If they don’t, fine." They came on the first take. Dockterman scanned the room and saw some crew members crying just watching her on the monitor. One of the grips remarked, "There is no place in the world I would rather be right now." That indelible moment encapsulates Dockterman’s cast: "I was really blessed with a wonderful cast who loved this project."

6. "Get the doers" with experience, know-how, and a contagious work ethic.

For Dockterman, that meant snaring a qualified Canadian crew to tackle an "ambitious film" complete with stunts and explosions. Normally, Canada’s a cinematic hot zone. "The Woodcutter," however, came to town during a quiet spell in November after a busy, lucrative summer. Dockterman frames the industry’s Hobson’s choice: "They could either work on a meaningful project they liked for less money, or stay at home. And so we got some of the top people in Canada, thanks to Vancouver co-producers Blake Corbet and Ron McLeod."

Securing key positions created a domino effect — everyone who loved to work with them quickly fell in line. The expert crew slashed and burned, so to speak, across the beautiful, vast Vancouver terrain: "We built things; then we destroyed them." Dockterman’s crew even found a site that had never been used (a rarity for a region whose pockets of land are recognizable in films by the locals): the VanTan Club, a tanning club and nudist colony that doubles as the unlikely home for remote cabin-dweller Jake. Canada’s talent was instrumental in creating Dockterman’s story: "It’s set up like Hollywood without any of the b.s. It’s a service industry there."

Since principal photography wrapped in December, Dockterman has begun to reflect on what she’s accomplished. At the heart of the project beats an impulse to give war a face: "They train soldiers on all sides to depersonalize the enemy, but everyone has a face." Dockterman hopes that one veteran’s unexpected journey to healing will resonate with others: "So many people are still affected by the Vietnam War, and as long as our country continues to make the same mistakes, I’ll ask: ‘Can’t we please learn from this?’"

Learn we do, for Dockterman teaches us much. In fact, she hasn’t strayed far from the multimedia niche she created, educating with stories: "I’m doing the same thing on a different scale." Before "The Woodcutter" was even a seed, she was honored at the New York Film Festival for an interactive video, and has another on permanent display in the National Museum of American History. This story, too, will find its place. The experience has even taught Dockterman herself: "I’ve learned that if you really believe in something, you should stick with it. But you also need to trust your gut and know when to walk away, just like the song." For her, the latter was a frequent temptation, but never an option: "This story was too important to tell." Indeed, this veteran storyteller has carved an enduring tale.