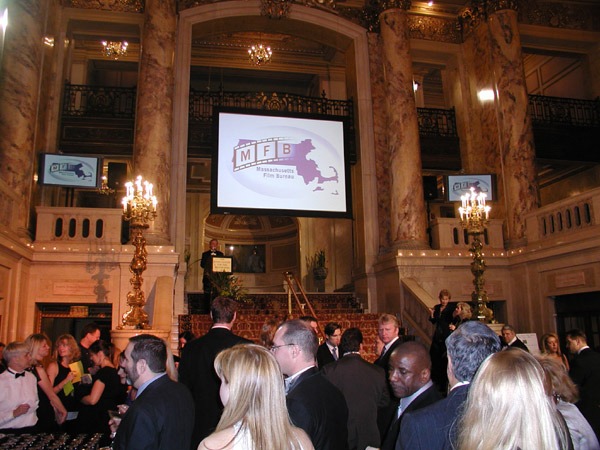 And the Oscar Goes To…

Share
... the Massachusetts Film Bureau (well, in our minds) for their dedication to bringing Hollywood to Massachusetts long after government funding has vanished.

Part One: The Backstory

On February 6th, in the grand ballroom of the Wang Theater in Boston, Robin Dawson, the Executive Director of the Massachusetts Film Bureau (MFB) announced the 13th Annual Massachusetts Movie Awards Gala to be held on February 29 (Oscar night). The Gala is an annual fundraiser set up to benefit the nonprofit MFB. On hand with Ms. Dawson were Boston City Councilman John Tobin, Joe Appleby, Executive VP of Subaru of New England (representing Ernie Boch Jr.), and Jim Carter of American Airlines. In addition, Neal McDonough, a Boston native who has appeared in such films as "Minority Report," "Timeline," and "Walking Tall" and the TV series "Boomtown" and "Band of Brothers," leant a little star power to the occasion with his appearance. These corporate, municipal, and entertainment sponsors stood shoulder to shoulder with Ms. Dawson in support of the Film Bureau and its indispensable role in bringing film projects to Boston and Massachusetts.

The history of the MFB could be the subject of a film itself. For years a publicly funded entity, the Bureau brought in hundreds of millions of dollars to the Bay State by lobbying major motion picture companies to film in Massachusetts. However, in 2002, the Film Bureau’s funding was cut by the State legislature. Hue and cry from politicians, the press, and private citizens was unable to rescue the Bureau’s funding. The once vibrant office and source of revenue seemed hopelessly lost.

Enter our Hollywood heroes on horseback, Robin Dawson and Laura Yellen (Assistant Director of the MFB). Dawson and Yellen, were able to use their contacts locally and nationwide to transform the Film Bureau into a non-profit organization and keep it a viable force in bringing film projects to Massachusetts. Companies like Subaru of New England, American Airlines, Enterprise Rent-A-Car and Dream Alley Pictures did not hesitate to lend financial backing and vociferous support to the Film Bureau and its mission. "Robin [Dawson] and I were scrambling for a while," explained Laura Yellen, "wearing many different hats and working out of our homes to keep the Bureau alive. But thanks to our many fine sponsors, we now have office space and are looking forward to a very successful 2004 in terms of raising funds and bringing projects to Massachusetts."

Efforts have already paid off as a tally of the Bureau’s 2003 successes does not fail to impress. Due to its efforts the Mass Film Bureau announced that "an estimated $112.8 million was generated into the local economy for the fiscal year ending July 1, 2003." The MFB facilitated production for six major films in that fiscal year including David Mamet’s "Spartan" (starring Val Kilmer and due for release later this year), Castle Rock’s "Alex and Emma" starring Kate Hudson and Luke Wilson, the Matt Damon, Greg Kinnear hit "Stuck on You," the Julia Roberts, Kirsten Dunst, and Julia Stiles heart-warmer "Mona Lisa Smile," the Philip Roth adaptation "The Human Stain" starring Anthony Hopkins, and finally the multi-Academy Award nominated "Mystic River" starring Sean Penn, Tim Robbins, and Kevin Bacon and directed by Clint Eastwood. The films were shot throughout Massachusetts in Rockport, Gloucester, Wellesley, Framingham, West Bridgewater, Cambridge, and Boston.

These productions led MovieMaker Magazine to name Boston the 3rd best city in America in which to film. Moviemaker’s Winter 2004 edition sang its praises, "It might seem quite a feat to go from nowhere on this list to number three. But if any city has proven that the dedication of just a few hard-working individuals can pay off, it’s Boston." Austin, Texas and New York City were one and two on MovieMaker’s list respectively.

"It is rewarding to have secured this business for Massachusetts," Dawson said. "This industry is an important economic engine for the Bay State. Through the support of many local businesses, the MFB is continuing the tradition of filmmaking in Massachusetts, which is also an integral tool to increase tourism." Laura Yellen added that another key element to the MFB’s continued success is "to convince the thousands of young moviemakers who go to school in Boston to stay and launch their careers here after graduation." Part of the MFB’s mission is to draw more and more film projects to the Bay State. If graduating students see the appeal of filming in Massachusetts then perhaps they won’t be as tempted to consider New York and Los Angeles as the only places where filmmakers can embark on professional careers.

Joan Rivers was not on hand to greet arriving glitterati. Billy Crystal did not sing and dance. One-handed push-ups, coarse political statements, celebratory romps across the stage of the Kodak Theater — none of it happened.

The reason why: the event was not the Academy Awards in Los Angeles but the 13th Massachusetts Movie Awards Gala in Boston. On February 29 in the Wang Theater, the black tie event, hosted by local television personality Barry Nolan, attracted over 400 guests to benefit the MFB. There were two choices available to ticket buyers: general admission tickets were $150 per person, and for $500, ticket holders received not only admission to the event, but also an exclusive VIP sit down dinner with celebrities in The Metropolitan Room of the Wang. All proceeds went to the Massachusetts Film Bureau.

The Gala included cocktails and an elegantly catered dinner buffet, followed by a special presentation of the Massachusetts Citizens Filmmaking Award. The award went to Neal McDonough. McDonough praised Robin Yellen and the Massachusetts film community. "Boston is a large city and well known for its support of the arts," he said, "so it was a tremendous blow to see the Film Bureau lose its public funding. But there were two women [Dawson and Yellen] who had a lot of guts, and an up-swell of support from you the community made the resurrection of the MFB not only a possibility, but also a tremendous success."

In between auctions for sporting event tickets and weekend getaway packages as well as raffle drawings, a simulcast of the 76th Annual Academy Awards was broadcast in the ballroom of the Wang. The guests, largely comprised of Boston and Massachusetts natives, roared their approval for the first Oscar presentation of the night, the award for Best Supporting Actor which went to Tim Robbins in "Mystic River."

The locally shot film was up for six awards and a few of its players were present to lend their names and support to the MFB. Local actors Kevin Chapman and Joe Stapleton had small roles in Clint Eastwood’s and Brian Helgeland’s adaptation of the Dennis Lehane novel. Other celebrities on hand were Ken Howard ("Crossing Jordan" and "The White Shadow"), Jimmy Cummings (actor, writer for "Southie," and actor in "Ash Wednesday"), and Steve Burton of WBZ TV.

Winners of Oscar statuettes included Renee Zelwiger, Erol Morris, and Peter Jackson, but the biggest triumph came for the MFB and the film community in Boston and Massachusetts. The Gala was a fun-filled evening with an upbeat spirit and an aura of determination. A year and a half ago the MFB nearly disappeared forever, but, to borrow a phrase from "The Shawshank Redemption," "no good thing ever dies." Patrons of the arts, corporate sponsors, and actors and actresses banded together to make sure those words continue to ring true. If the past year is any indicator as to how the MFB will fare in the future, a long and prosperous reign — similar to that of King Oscar — is assured.