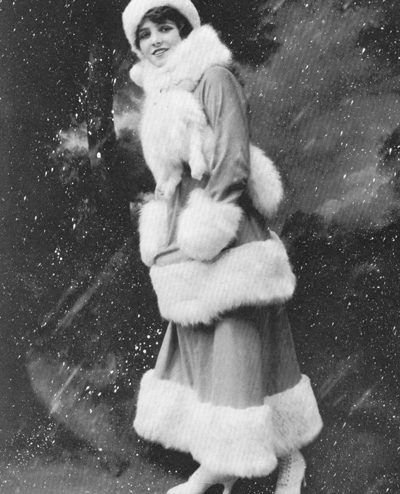 Share
Sarah Baker discusses her documentary film 'Olive Thomas: The Most Beautiful Girl in the World,' which screens as part of Lost Theatres of Somerville.

Most cinephiles have heard of silent film stars Mary Pickford, Clara Bow, and Louise Brooks. Few, however, would recognize the name Olive Thomas. Documentary filmmaker Sarah Baker, in her film "Olive Thomas: The Most Beautiful Girl in the World," hopes to rescue the silent cinema star from the obscurity of celluloid history and earn her a respectable place in the pantheon of pre-sound players.

Sarah Baker is a native of Texas and a graduate of Southwestern University. At Southwestern, she double-majored in history and women studies, so it would seem the persona of Olive Thomas was a natural — almost inevitable — match. "I always liked old movies," Baker explains. "But one day, I happened to see a film that changed my life." The film was the silent classic "Wings," made in 1927. "After seeing that, I read everything I could get my hands on about silent film and watched as many as I could find," she says. This search eventually led her to the intriguing figure of Olive Thomas.

Olive Thomas was born in Charleroi, Pennsylvania in 1894. As a teenager, she sat for the famous artist model Harrison Fisher who dubbed her "the most beautiful girl in the world." She soon became one of the leading players in the world renowned Ziegfeld Follies. Next, Thomas moved into silent films, appearing in over 200 movies. She mainly played supporting roles — as the ingénue — but was on the cusp of super stardom when she died suddenly in 1920. Myron Selznick, David O. Selznick’s brother intended to make her a leading lady, but an apparent suicide (she ingested poison) denied her an almost certain starlet’s career.

Olive Thomas’s death was the first of the Hollywood scandals — including the Fatty Arbuckle and the Hearst yacht cases — that led to the enforcement of the Production Code. Thomas was the first flapper, a rule breaker, and she set the tone for the jazz age’s female liberation. Strangely, of the over 200 films in which she appeared, only one can be found in general circulation: "Love’s Prisoner." The rest are lost, fragmented, or available only in private film archives.

Sarah Baker’s research on Olive Thomas began seven years ago. It was the first film project she had ever worked on and progress was slow. The pace quickened when she joined forces with Timeline Films in 2001. A well-known producer of documentary films, Timeline Films agreed to fund her project if she wrote a script for the film. In August of 2003, under the auspices of Hugh Heffner and his film preservation organization, Baker spent six weeks editing and assembling the footage she’d gathered of Thomas’s career and life. The film is now in a polishing stage, with music and narration by Rosanna Arquette being added. It is 60 minutes long and set to be released in February of 2004.

"Her life story was so sad, and she was so beautiful," Baker explains. "Her acting was so good that I knew she had a story to tell, and somewhere along the line I realized I could be the one to tell it. I researched every facet of her life, from her film career to her stint in the Ziegfeld Follies and her humble beginnings in Charleoi, PA. I have probably 200 pictures of Olive, both original and reproductions. I have entire files of clippings and stuff about her life that I gathered for years as I piece her story together."

Film historian Michele Gouveia of Tufts University in Somerville, Massachusetts learned of Baker’s film and recommended it for the "Lost Theatres of Somerville" program, "a visual and oral history of neighborhood picture palaces." According to the website, the program "looks at the movie-going experience before the explosion of suburbia and television, when theatres were gathering places for not only the family but the entire neighborhood, communal living rooms where news, gossip, and the promotional give-away were all part of the entertainment. It tells the story of the rise and fall of public entertainment, from 1904 when movies first came to Somerville to the present world of multiplexes and malls."

Lost Theatres is a yearlong exhibit, from March 2003 and continuing through February 2004. It features screenings, lectures, memorabilia, and photographs that explore the history of Somerville’s 14 classic movie theaters.

After the screening for Lost Theatres, Baker will begin to shop the documentary to various broadcasters, hoping it might appear on cable networks such as The Lifetime Channel or A & E. It will also be released on video, and plans are in the works to put Baker’s film on DVD along with restored Olive Thomas movie "The Flapper."

Baker is already planning her next project. She has a lot to say, and again it’s about the silent cinema era. Baker is researching leading silent romantic couple Janet Gaynor and Charlie Farrell. The project could take shape as either a film or a book.