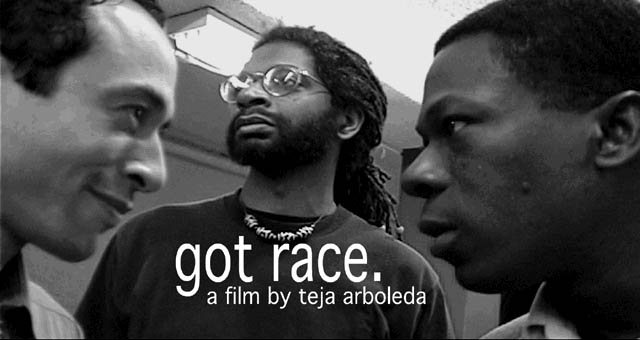 Share
Filmmaker Teja Arboleda talks about the making of his film 'Got Race, ' which screens at Coolidge Corner Theater this month.

Teja Arboleda grew up in Japan, lived in Germany, and moved to the United States. He has visited 23 countries around the globe and 500 cities and towns in North America. "I am African-American/Native-American, Filipino-Chinese and German-Danish," he says when asked about his heritage.

Arboleda, an Emmy award-winning editor, studied communications at Clark University in Worcester and is now a professional writer, director, and actor. For the past 10 years, he has been performing his one-man shows, "Ethnic Man!" and "Gene Therapy" in 48 states. Currently, Arboleda produces commercial videos and teaches at the New England Institute of Art in Brookline. His new feature film, "Got Race." (no question mark, but a period) will be premiering on Sunday, December 14 at the Coolidge Corner Theater.

GS: Where did the idea for "Got Race." come from?

Arboleda: I had been traveling around the U.S. performing a one-man show "Ethnic Man!" which is about coming to terms with my multiracial/multiethnic and multicultural heritage. Before the 2000 census, I campaigned around the country and testified in front of the Senate to force the government to include a "multiracial" category. It was turned down at the last minute. This got me thinking — as the concept of different races is completely artificial, arbitrary and political, if I were to "falsify" my race in order to obtain a job, or mortgage, even in answering the census, would this act be considered illegal? "Got Race." is a commentary on how there is no question about race, but there is an answer to what we all are — one race.

GS: What is the basic premise of your story?

Arboleda: "Got Race." is the story of a man, Alex Camacho, who manipulates the system by changing his race in order to obtain a job. He works as an assistant campaign manager to a racist businesswoman who is running for Congress and is lured into the net of an affirmative action group and then into the lair of a group dedicated to eliminating racial categories. His affiliations and actions get him in trouble with his employer and the law. In the courtroom, the question becomes contentious and he defends the right to define, not only his own, but all human categories.

GS: You shot "Got Race." on digital video. What limitations, if any, did you encounter with video that may not have been a factor had you shot on film?

Arboleda: Firstly, I believe in this country we focus far too much on technology, and not enough on the story. For example, the U.S. is the only industrialized country that does not consider 8mm film a professional format. The constant change in the concept of what is "acceptable" in terms of technology and "the look" is causing tremendous stress for independent producers, despite the fact that equipment and stock is becoming more affordable. I shoot DVCPro and miniDV. Most of "Got Race." was shot using my Canon XL1s. As a photographer and 16mm cameraman, I long for the feel and look of film cameras, but the only limitation of shooting video as opposed to film is in respect to contrast ratio. This can be negotiated with lighting, wardrobe, and picking really good earth-tone locations.

GS: Obviously this is a politically motivated and driven film. How are you able to keep it entertaining at the same time?

Arboleda: I have dedicated my life to telling stories about injustices, diversity and basic human rights. I do know, however, that controversy works better when combined with humor. Americans love to laugh about irony. It is exposing the irony through humor, but with deep meaning, that makes a good story. I have spent 10 years talking about these issues through humor, via my one-man shows, with great success.

GS: Did you find the process of writing, directing, and editing exhausting or enjoyable?

Arboleda: I find that writing, directing, and editing my own film was exhaustingly enjoyable. I have more energy than most people half my age. However, I found it very difficult to do everything at once. The movie I’m directing and producing now, "Imperfectly," was written by my wife Barbara, who also stars in it. I’m not in it. She doesn’t want me in it. Apparently I complained too much during the last film.

GS: What are your distribution plans for "Got Race."?

Arboleda: It has been sent to some film festivals. However, my agent is gearing up to send me to hundreds of schools and colleges to show the movie and discuss this very difficult topic.

GS: What has your filmmaking experience been like in and around Boston?

Arboleda: Boston’s weather can be very unpredictable but the locations you have access to are fabulous. And more importantly, there is a tremendous amount of support for independent filmmakers. My wife and I both moved a lot in the past, so we will most likely stay in the area for a while.

GS: What do you want people to take away from your film?

Arboleda: I want people to leave the theater with one thought — race is a pigment of the imagination.