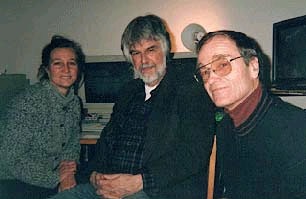 Share
Professor and filmmaker Larry Benaquist talks about his new documentary 'Here Am I, Send Me: The Journey of Jonathan Daniels,' the state of academic film studies, and why every movie is a miracle.

Filmmakers with a doctorate in Renaissance studies aren’t a dime a dozen. Nonetheless, Larry Benaquist, documentary producer and head of film studies at Keene State College, is quick to point out the connections between his current profession and his academic training.

"If Shakespeare and Marlowe were living today," Benaquist speculates, "they would be making films. Like Shakespeare’s plays, film is a democratic form accessible to a broad public." The subject of Benaquist’s latest film also had few qualms about foiling conventional expectations. "Here Am I, Send Me: The Journey of Jonathan Daniels" reconstructs the life of the eponymous civil rights activist from Keene, NH who died in Alabama by a racist’s bullets, sacrificing his own life for that of a black colleague.

Benaquist’s one-hour documentary explores Jonathan Daniels’ uncanny journey with a blend of interviews and archival footage, narrated by actor Sam Waterson. Daniels’ life was far from common and the path he followed was hardly self-evident. The film documents the scrawny boy’s initial difficulties to be accepted by athletic cliques at school to his surprising decision to attend the Virginia Military Institute. It was there that he first experienced segregation firsthand. After graduating first in his class, Daniels drifted for a few years, including a depressed stint at a Harvard PhD program.

Suddenly, on Easter Sunday 1962, Daniels experienced an epiphany while attending mass at Boston’s Church of the Advent. He realized that his calling lay in the Episcopal ministry and decided to dedicate his life to the needy. Formerly an apolitical youth, Daniels was galvanized by the demonstrations supporting blacks’ civil rights taking place in the South. Heeding Martin Luther King’s call for northern clergy to assist him, Daniels moved in with a black family in Alabama and devoted himself to tangible social change. Daniels died in the service to his cause after ignoring his colleague Stokely Carmichael’s warning to stay away from a particularly racist area.

The question at the center of the film is, in Benaquist’s formulation, "how did a kid from Keene go on to have such an extraordinary life?" Daniels’ journey is a story of transformation: from shy boy in a sleepy New England town to outspoken civil rights advocate in Alabama. "For Daniels the civil rights issue in 1960s America was neither a whim nor a fad: it was a theological commitment to change."

In addition, there was a personal dimension in making the film for Benaquist. After moving to Keene in the late 1960s, he became acquainted with Daniels’ story and over the ensuing years became more and more interested in the local legend. Co-producer Bill Sullivan knew the mother of the young civil rights leader. From this vantage point and his own experiences during the 1960s, Benaquist could recognize just how truly remarkable Daniels’ path in life was. "Although I marched at some anti-war protests, Daniels actually lived his personal commitment to the ideals of social change."

Daniels’ dedication is apparent from his writings and letters, and well as the lives he touched. The film provides crucial insights into Daniels’ mind with a number of passages it includes from Daniels’ sermons and other written work. In addition, Benaquist interviewed over 70 individuals in over 20 states, including Congressman John Lewis, Black leader Stokely Carmichael, and former ACLU lawyer Charles Morgan. According to Benaquist, the most difficult part of the film was the research. "Unlike some of his contemporaries, such as Martin Luther King, Daniels was never in the public eye until after his death."

The last part of the film deals with the trial of Daniels’ murderer (deputy sheriff Tom Coleman) and goes on to suggest that Daniels’ sacrifice was not in vain. His death and Coleman’s swift acquittal at the hands of an all-white jury prompted outcry from across the country. President Johnson gave personal attention to the case and the FBI investigated evidence of a conspiracy. Many have argued that Daniels’ death led to the passage of the 1968 Federal Jury Selection Act. Others point to the positive impact of Jonathan’s sacrifice on the voter registration and social activism among black Alabama citizens.

Moreover, the film itself, which debuted in 1999 as a 50-minute piece on the Odyssey Channel, has already made an impact as part of a wider renewal of interest in Jonathan Daniels. Julius P. Williams, a black composer of note, has written a major orchestral and chorale work on Daniels’ life that will premiere in Alexandria, Virginia in March 2004. In addition, Antioch College, New England, is instituting a Jonathan Daniels Humanitarian Award. For Benaquist, the effect of his documentary points to the tangible power of cinema in our society.

Cinema’s privileged cultural function led Benaquist to teach and then make films. The film program he created and heads at Keene State College reflects his belief that the study of film should encompass both theory and practice: film majors at the college must pass courses in both production and critical theory.

The program that Benaquist has shaped, unique among liberal arts colleges in New England, has become a lively site of creative interaction between instructors and future film scholars and filmmakers. Full-time faculty as well as adjunct professors like Kate Phillips, who wrote "The Blob" and starred in over 50 Hollywood films, has made Keene State an international destination for film studies.

"We have over 100 majors in the film program, including students from England, Japan, and Ecuador. They take part in an experience in which they write, cast, and direct films themselves — and afterwards they can talk intelligently about their product."

Benaquist quite literally practices what he preaches. Besides teaching classes on such subjects as teen sexuality in 1950’s American movies, Benaquist is currently putting the finishing touches on his next film. It will be a documentary on Martha Shaw, a Unitarian from Providence who daringly rescued Jews from Hitler’s Europe only to face false charges of Communist activity after the war.

Perhaps similar to Jonathan Daniels, Benaquist had an epiphany of his own that brought him to his present academic-artistic vision of film. After treating cinema with a degree of "intellectual snobbery" early in his academic career, everything changed for Benaquist while shooting his first feature. "Once I started making films, I suddenly had so much more respect for even the most mediocre films. Filmmaking is a really, really hard process. I realized how much every film is a miracle."