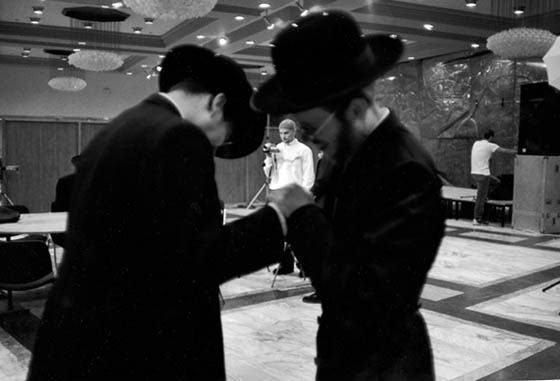 Share
How filmmaker Dan Akiba turned a wedding video into much more in 'My Brother’s Wedding,' screening at the Boston Jewish Film Festival this month.

About seven years ago, Dan Akiba’s brother, Jonah, made some changes in his life: he dropped out of college, and embarked upon an extensive world tour. He went out to ‘find himself.’ Along the way, he found himself in Israel, taking a class called ‘Discovery,’ which endeavored to prove that in the Torah were the actual words of God.

In their childhood, Dan and Jonah, were often mistaken for best friends since they were so close but had little physical resemblance. They grew up in Boston, in a family with liberal religious beliefs, who identified themselves as Jewish, but led a lifestyle Akiba describes as more secular than orthodox. Thus when Jonah’s beliefs became fundamentalist, when it became clear that he defined himself as Israeli instead of American, the family was a bit shocked.

The family, Akiba, his father, mother, and her second husband, were reunited with Jonah on the occasion of Jonah’s wedding in 2001. It became clear to the filmmaker, as he shot footage of the trip that the distance between he and his brother went well beyond the geographic. "For me it was the final stamp of how different out lives were and would be," Akiba said of the experience.

Witnessing Jonah’s new life in Israel firsthand proved to Akiba that the relationship, and indeed the brother he knew so well, had changed. Akiba, and the family, were perplexed by the radical nature of Jonah’s conversion: the appeal of the strictness and rigidity of the culture he had embraced was a bit lost on them. Akiba said he also felt a bit alienated by Jonah’s new values as a Hasidic Jew, feelings "that came rushing back," to him as he viewed the footage he shot back home in the states. Though Akiba is quite up-front about the perspective of the film – his — he does recognize that Jonah’s experience was a powerful one, and that it has resulted in the family discussing things they had never talked about before. "It opened new lines of communication," Akiba said, then added, "I can’t feel guilty about it."

When asked whether he sees his work as being as personal as "My Brother’s Wedding" in the future, the up-and-coming filmmaker insists, "I’m not afraid to do it again." Nonetheless, he said that he is going to "stay away from personal material for a while." The world of documentary film, however, is where he feels most at home, and not because he hasn’t tried the other stuff.

While in Boston, before relocating to New York, where he now lives and works, Akiba dabbled in indies doing camera work on films he said "no one will ever see," and worked doing the various and sundry tasks of a P.A. on commercial shoots. Like his brother, Akiba too has gone through personal reinvention: he left Boston to find himself, enrolled in City College of New York to escape the rigors of local commercials, and embarked upon this, his first film.

Of the presumably hours of digital video footage Akiba must have shot in visiting Jonah and coming to terms with the reality of his relationship to his brother, he has produced a work of 35 minutes. For this, Akiba credits editor, Lori Chodos: "we worked really well together," he said. So well that they are currently collaborating on a PBS documentary for WNYE, in New York. Because of the highly personal, emotionally charged nature of the content of "My Brother’s Wedding," Akiba is thankful for her assistance and support in the editing process; he said it was she who kept him focussed during the post-production process.

Their product is a collage of Akiba’s Israel footage, interviews, and family photographs. The work of Akiba’s father, a professional photographer and teacher, provided the filmmaker with an extensive archive of family portraits, documentation of that liberal and secular lifestyle Jonah left behind when he went to Israel. Akiba described his father as prolific: producing as much as an album a year, supplying Dan Akiba with volumes of images dating back to his boyhood in the ‘70s. Akiba and Chodos juxtaposed these images with interviews conducted here and in Israel, as well as footage shot in Israel of Jonah’s wedding.

According to the City College web site, www.ccny.edu/cityvisions/films/wedding/wedding.html, Dan and Jonah’s mother told Jonah, upon departure for Israel, "Have a good time, but whatever you do, don’t become Orthodox." Such spiritual/intellectual conflicts promise to be explored by Akiba’s interviews in "My Brother’s Wedding." In fact, when asked what Jonah himself thought of Dan’s film, Akiba admitted that his brother was "a little upset," hurt by revelations made in the interviews. Part of the film’s aim is to investigate how difficult such radical conversions are on everyone.

The frank discussion of such powerful, emotional and topical experiences must be what caught the eye of the Boston Jewish Film Festival. Apparently, organizers came across the film on the City College site, the credits were posted there because it was Akiba’s thesis film, a project he financed personally, as a student there. Before that, "My Brother’s Wedding" was screened at the Austin Film Festival, and was a finalist (among six selected out of 400 entries) for the Angelus Award.

"My Brother’s Wedding" will be screened November 12, 2003 at 6 PM as part of this year’s Boston Jewish Film Festival. Right now, Akiba has some ideas for future work, "hopefully, I’ll be back working in the independent spirit," he said. As far as advice to filmmakers in the position he was in not long ago, Akiba says: "start small." After all, what began as a personal event is now a finished film — recognized and screening near you.