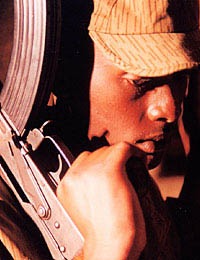 The chance is high that if you are involved in New England’s film community, you have crossed paths with David Kleiler. David Kleiler is the founder and director of Local Sightings, a Boston-based consulting firm dedicated to all things cinema. Kleiler has been on the local scene for over 30 years, mixing his substantial knowledge of film with a penchant for the independent and the alternative to bring to the public’s attention the work of underexposed and underappreciated films and filmmakers.

And perhaps only Kleiler has the repute, the desire, and the connections to launch the kind of enterprise he debuts October 8th with the first film in a series he calls The Film Circuit. In association with the Toronto International Film Festival Group, The Film Circuit will screen 30 films in various venues throughout New England over the next year. Its debut film, "100 Days" has its American launch coinciding with the closing night of the Boston Underground Film Festival. "100 Days" is an eye-opening documentary about the 1994 genocide in the African nation of Rwanda.

Kleiler began his love affair with the cinema at the university, combining doctoral work in cinema studies at New York University with an arts administration degree from Harvard Business School. This unique combination prepared him for a singular career in support of independent and avant-garde filmmakers in New England. Kleiler has also given back at the university level, having taught film studies at such institutions as Babson College, UMass Boston, Emerson College, Tufts University, and Boston University.

From 1988 to 1996, Kleiler was the Artistic Director of the Coolidge Corner Movie Theatre in Brookline, Massachusetts. Under his guidance, "The Coolidge" became renowned for its support and exhibition of independent and local films. In addition, his name appears in the credits of countless films made in and around New England. Most notably, he earned an Associate Producer credit for Brad Anderson’s "Session Nine."

Kleiler’s office in Brookline, Massachusetts is a cinephile’s shrine, stuffed to the gills with films, videos, books, and movie posters. Everything from a press release for a local film to a text on the style and content of film noirs to a pile of screenplays from prospective scribes seeking to benefit from Kleiler’s knowledge can be found in the Local Sightings office.

Kleiler has also been a long-time presence on the film festival scene both in and out of New England. He has directed the Northampton Film Festival and for the last 14 years has made the pilgrimage, along with thousands of others, to the Toronto International Film Festival. His trips to Toronto have taken on special resonance lately, for Kleiler, as current director of the Boston Underground Film Festival, has used the relationships forged in Toronto over the years to premiere The Film Circuit in 2003.

"I felt a sense of mission behind this," Kleiler says about the launching of the program. "I wanted to bring independent and foreign films to areas that normally don’t get them. These films won’t be in your local megaplex, but they are the types of movies that art houses, film societies, and museums can exhibit. They can generate controversy and begin dialogues. They will be movies that people can really talk about."

Kleiler’s annual trips to Toronto and his unwavering (and well-known) support for alternative programming in cinema made The Film Circuit possible. This past year he was able to strike a deal with the Toronto International Film Festival Group that would allow the Group to patronize The Film Circuit in return for a guarantee that a portion of the movies shown would be Canadian productions.

"Canada has a lively film production community," Kleiler explains. "Not many Americans get to see the slew of wonderful movies coming from Canada each year. The arrangement I’ve made will allow New Englanders to see some of these terrific, Canadian productions while also enabling me to exhibit other international films as well as local and independent movies. The Toronto Group’s backing of The Film Circuit is the perfect way to bring a mix of great, alternative movies to the attention of art-cinema enthusiasts and independent-minded viewers."

The Film Circuit will offer a mix of documentaries, feature-length narratives, and short programs. The films will mostly be those that have already screened at film festivals and other venues and have a proven track record with audiences. "100 Days" will kick off The Film Circuit’s programming on October 8th with a showing at the Museum of Fine Arts, Boston. The film represents the culmination of the Boston Underground Film Festival, which Kleiler began five years ago, holding it annually in February. This year he made the switch to September to allow the festival to coincide better with the independent and alternative screening season. Kleiler characterizes this year’s BUFF as a "decrease in schlock and an increase in political content." A film about the horrific genocide in Rwanda surely proves that assertion. The festival begins on September 25th and runs through October 10th.

If all goes well, Kleiler says that in a year or two he’d like to pass on The Film Circuit torch. He has high hopes for this new venture, and even if he does pass on the torch it is certain that its sparks will be difficult to extinguish.