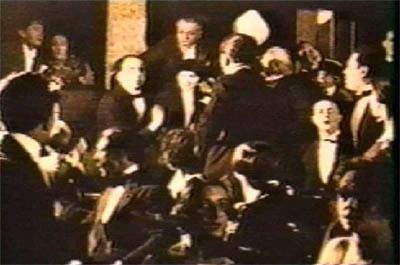 Share
A review of the film screening this month at the Film Fest New Haven, 'Bad Boy Made Good,' about American composer George Antheil.

The current take on the history of any art form is in ever-changing flux. The reputation of some painters, writers, filmmakers, and composers fades over time, while forgotten and obscure masters are constantly being rediscovered. The work of avant-garde American composer George Antheil has experienced a surge in the past few years, largely due to the recent premier (at the University of Massachusetts, Lowell) of the recently unearthed original version of his modernist masterpiece, the "Ballet Mecanique" (1923-24), originally performed in 1926 in Paris with a vastly altered orchestra. The documentary "Bad Boy Made Good," screening at the upcoming Film Fest New Haven on September 21, documents both Antheil’s tumultuous life and the work put into the recent premier performance.

Born in 1900 in Trenton, New Jersey, Antheil showed an early aptitude for music, as well as a propensity for stubborn ambition. Outgrowing his early tutelage, he set off for Europe in 1922 and quickly became the toast of Paris. His unpredictable and often fiery performances earned him the nickname "The Bad Boy of Music." He lived above Sylvia Beach’s famous bookstore, Shakespeare & Co., and mixed with many of the major artists of his day, including James Joyce, Gertrude Stein, Ernest Hemingway, Pablo Picasso, Salvador Dali, and Eric Satie. In particular, he befriended Ezra Pound, who became his unofficial publicist, and the Russian composer Igor Stravinsky, his major musical influence. His musical output of the time, partly inspired by the Dada movement and the Italian Futurist composers, includes such percussive, mechanistic works as the "Airplane Sonata," "Death of the Machines," and the "Sonata Sauvage."

But his greatest success was the "Ballet Mecanique." Scored for 16 synchronized player pianos, two pianists, seven percussionists, seven electric bells, three airplane propellers, and one siren, the piece was a thundering, abrasive noise-fest unlike any heard before, with about 630 time-signature changes in its 1,240 measures. Unfortunately, in the debut performance Antheil had to settle for four real pianists, rather than the planned 16 mechanical ones, simply because it was impossible to adequately synchronize them. Regardless, the piece was a huge success, provoking both cheers and jeers — and, of course, the obligatory riots.

The success proved short-lived, however. Recovering from a disastrous 1927 performance in New York , Antheil found success in Germany but soon fled for America, sensing trouble in the growing Nazi movement. He eventually found himself in Hollywood, composing film scores, his years at the forefront of the avant-garde a distant memory. The "Ballet Mecanique" remained largely forgotten, only performed occasionally in its shorter and tamer 1953 revision (generally regarded by music buffs and critics as inferior).

Still, his intellect never ceased its activity. A true Rennaissance Man, he focused his eclectic diversity of interests and abilities on, among other things, a detective novel, an acclaimed autobiography, a book on endocrine criminology, and love-advice columns for Esquire magazine. With actress Hedy Lamarr he invented a jam-proof missile guidance system, the principles of which are used today in the spread-spectrum technology of cell phones.

After the rediscovery of the original score of "Ballet Mecanique" by William Holab (then director of publications at the G.S. Schirmer music publishing company), the idea for the new performance was born. "Bad Boy Done Good" — directed and edited by Ron Frank, written and produced by Paul D. Lehrman (the MIDI expert who used computer-based MIDI technology to synchronize the 16 pianos), and narrated by Tony Kahn — mixes scenes from the performance with interviews of various composers, musicians, and scholars and vintage footage and photos. It’s a compelling look at a fascinating man — essential viewing for lovers of 20th century music and a great introduction for those of us whose tastes are less noisily inclined.

Also featured at the Film Fest New Haven is Brian and Richard Averill’s "Simple Revenge" (previously called "Turnabout"), a thriller that aims for territory already mapped out by such nail-biters "Blood Simple" and "A Simple Plan" but must have taken a wrong turn along the way. It gets kudos for sheer audacity, but the underdeveloped characters and the simplistic, linear (and occasionally implausible) plot fail to generate much suspense. Still, its better than your typical Hollywood offering. The seductive, manipulative Alex (Holly Perkins) one-ups any studio villainess in her sheer nastiness.