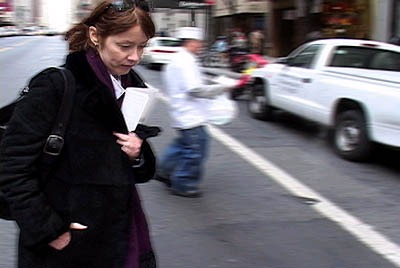 Share
Christopher Kelly Seufert talks about being a documentary filmmaker, his company Mooncusser Films, and his latest subject, Suzanne Vega.

The question is often asked, do you have to go to film school to be a filmmaker? Unlike many academic disciplines, a diploma or distinction at a university in film production, film studies, or screenwriting is not necessary for success in the world of cinema. Christopher Kelly Seufert is living proof of this.

As an undergraduate at Trinity College in Connecticut, he attended one film class and was bored out of his mind. He received a ‘D’ and eschewed film for many years thereafter. His studies both at Trinity and in graduate school focused on the odd combination of journalism and anthropology. These tandem passions didn’t remain disparate for long. An enthusiasm for reporting and an abiding interest in "visual anthropology" eventually, and perhaps quite naturally led him into the world of documentary filmmaking.

"I love the visual, and I don’t like words," Seufert explains. "I consider myself a medium of sorts, observing, recording, trying to be as objective as I can… being an anthropologist who records what is there without making a journalistic comment."

After some time out West and stints filming commercials and industrial videos in New York, Seufert wanted to come home — to Cape Cod. Born and raised on the Cape, he returned home to establish Mooncusser Films in 1999. "I prefer a smaller town," Seufert explains. "Boston and the New England area in general is one the top three regions for documentary filmmakers."

Mooncusser Films derives its name from Cape Cod pirates, who would, rather than take to the sea to win booty, induce ships to run ashore by falsely mimicking lighthouse signals. A full moon was a sailor’s best friend, and no amount of chicanery by land-lubbing pirates on a night with a bright moon could fool an experienced sea-going man. Therefore, on nights with a full or a bright moon, the Cape Cod brigands would "cuss the moon." Soon these outlaws became known as Mooncussers.

Chris Seufert’s work at Mooncusser embodies both this spirit of the local and the off-beat. His projects have ranged from documentaries on the small-boat fisherman of New England to the life and times of Edward Gorey, the animator and famed creator of the opening sequence to PBS Mysteries. Some of Seufert’s other clients include Minnesota Public Radio, Warner Brothers, The History Channel, The Alaska Marine Conservation Council, and The Cape Cod Chamber of Commerce. His most recent documentary, "Gill-netting on the Dawn T," won the Platinum Award at the 2002 Houston Film Festival.

This past year, Seufert took on his most ambitious project yet. In high school, he worked as a landscaper, mowing lawns, trimming hedges, and weeding the grounds of various Cape Cod homes. One of the houses belonged to international recording star Suzanne Vega. Vega is a neo-folk singer with such hits as "Luka," "Tom’s Diner," and "Marlene on the Wall" to her credit. She is known for an acoustic, natural sound and songs that capture the essences of the everyday, especially New York life.

Seufert, in a somewhat atypical fashion, didn’t go through a manager or press agent to reach Vega: he simply mailed a few letters to Vega’s Cape Cod house to broach the idea about a documentary of her day-to-day life. After hearing nothing, one day he suddenly received a call in November 2002.

"Suzanne asked me if I could do a performance shoot for her in New York in two weeks," Seufert recounts. "Given the little amount of time to prepare and knowing the limitations of shooting anything in Manhattan, I would have told most people ‘impossible.’ But I scrambled and was able to pull it off." Vega was impressed with Seufert’s skill and abilities, and, most importantly, the footage Seufert shot. "Suzanne’s passion for grass roots organization and my style of filmmaking and documentary outlook were a perfect match," Seufert states.

In February of 2003, he began work capturing footage of Vega. "My goal is to throw away anything you don’t have visual evidence for," Seufert says. And in embarking on this documentary, he didn’t necessarily want to concentrate on Vega the musician. "Sitting in her apartment or filming her staring out a cab window for 30 seconds is much more interesting to me than Suzanne Vega the recording star."

Unfortunately for Seufert, working with Vega he can’t always have his druthers. "Being such a recognizable personality, Vega maintains final say over the cut of the film, and she dictates many of the times and places where I shoot." This of course means filming musical performances, a departure from Seufert’s desire to capture Suzanne Vega the woman and not the musician. Ironically however, this compromise has led to good things for Seufert. For instance, CNN Headline News used some of his footage to do a short piece on Vega.

"I wish I could remain true to the principle of archaeological discovery in this film. I like showing instead of telling… letting go of the words," he says. "For this project a lot of that is impossible and it highlights some of the compromises a filmmaker must endure. But for me the outcomes have been positive so far. I’ve gotten good word-of-mouth, and as in the case of the Headline News, other work because of my efforts on the Vega project. In reality, the whole thing has been quite therapeutic for me as a documentary filmmaker."

Shooting on digital video, Seufert travels to New York about every two weeks to stay with Vega and record her life. "It can be trying at times," he says. "It’s hard to understand, but most New York restaurants don’t want me filming in their establishments. And it’s hard on Suzanne… I mean a guy filming you attracts attention she doesn’t always want." Despite the difficulties of the production, Vega herself comments, "I don’t mind being filmed for a documentary, since it allows the camera to see me when I am in action, and then I don’t have to worry about posing. I hate posing! This approach shows me at my best."

Seufert’s been to London in the past year as well to record Vega on a two week swing of her European tour, and he plans to continue capturing footage until he has over 100 hours. "At that point," he says, "I’ll edit what I have to make a two hour piece — three hours if making a DVD seems feasible." He plans to take the film on the film festival circuit and eventually try to find a home for it with a cable network such as HBO.

"Whatever the outcome, it’s been an incredible experience working with Suzanne," Seufert says. He may have received a ‘D’ in his only film class in college, but for Chistopher Kelly Seufert and Mooncusser Films the reality is top marks.