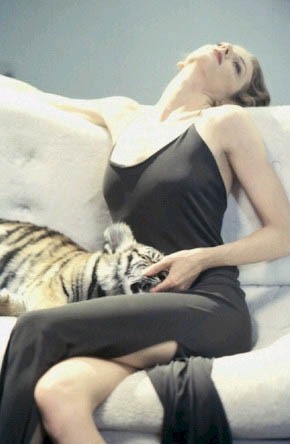 Share
L.A. auteur Laura Nix illumines the origins of her stylized lesbian melodrama, 'The Politics of Fur,' a highlight of the upcoming Boston Underground Film Festival.

Laura Nix’s first narrative film, "The Politics of Fur," has played to rapt audiences all over the world and will finally make its Boston debut during the Boston Underground Film Festival, running September 26 – October 4. Known primarily for her dozen-plus documentaries to date (she’s a partner in Automat Pictures with Jeffrey Schwarz, whom she met while both were working on HBO’s "The Celluloid Closet"), Nix has made a brave leap into fiction — semi-autobiographical fiction, as she reveals in the following interview.

Whatever personal pain she may have experienced, she has managed to mediate it with scintillating style and liberal splashes of humor — an element all but absent in the template she drew on, Fassbinder’s 1972 classic, "The Bitter Tears of Petra Von Kant." Like Petra, Nix’s Una (here a super-sophisticated music industry honcho played by Katy Selverstone) takes up with a questionable lover (Brynn Horrocks portrays "B." as a female Sid Vicious), while relying on the ministrations of a submissive servant (T. Jerram Young). Before long, the question of who’s dominating whom is wildly up for grabs.

SM: What a striking movie! I’m curious about the process, and what came when. How did the idea germinate? Were you directly inspired by "Petra"? (Of course, there are huge divergences.)

Nix: I was trying to write a film about a relationship I had with a woman in San Francisco that really stirred up a lot for me. I wanted to work in the melodramatic form, but do so in a humorous way. I watched a number of films that inspired me, including "The Bitter Tears," but also films by Douglas Sirk, Pedro Almodovar, and Jacques Tati.

SM: Did you start out with an actress in mind — Selverstone is phenomenal — and build it around her?

Nix: I went through a conventional casting process, guided by my casting director Bill Ingram, who is exceptionally sharp and insightful. He had seen Katy Selverstone in a play, and thought she was suited for the role. It was an incredible day when she came in to read. It was one of those auditions where the person literally walks in and says hello and I knew she was right for the part. She’s an incredibly intelligent, powerful, and talented actress, and she understood the myriad of layers that comprise Una on a deep level. My collaboration with her to craft this character was one of the most rewarding experiences of making the film.

SM: How would you compare your extensive experience making documentaries, and the process of creating a fictional work? Did certain skills prove helpful?

Nix: Working with crews and constructing a story in scripting and editing are skills that cross both genres. A narrative piece has a set of unique requirements when writing, however, that I had to learn a lot about. The biggest difference of course is working with actors, which is a unique process that you don’t work in when making docs. I devoted a lot of time to start to learn how to do that before embarking on this project, and can’t wait to make my next film so I can learn more.

SM: Did the script change substantially in the course of filming?

Nix: Only in the last scene, where we changed Una’s focus and response to her crisis. But in the rest of the film, there were some tweaks, and lots of cuts, but the dialogue stayed the same. Even highly energized scenes, like the last fight between B. and Una, were completely scripted.

SM: One of the salient differences between your film and "The Bitter Tears" is the humor, which emerges in the interplay of the characters. Dick is a real presence, and not just a cipher like Petra’s Marlene. How did you envision this role, and was there a specific intent behind making him male?

Nix: The humor in the film is especially important to me. I find humor in extremely emotional situations: I think we have to in order to survive. There are just moments in life where you have to laugh at yourself and the predicaments you find yourself in, especially in love. Dick is a character who serves many functions, including some comic relief. He also illustrates how Una doesn’t know where she ends and other people begin — which we observe in scenes like the sex scene in the kitchen.

SM: The social and sexual activity crosses lines that ordinarily seem pretty rigidly defined. Does this reflect a wish (e.g., that lesbians and gays become mutually more tolerant and inclusive) or an observation (i.e., that they already are)?

Nix: Well, there is definitely a more open expression of sexuality in the queer community, specifically in the gay male community. I wanted to poke fun at some aspects of that, like the circuit scene and white parties, etc. But the open sex in the movie mostly serves as an illustration of the total lack of boundaries in Una’s house.

SM: I’m impressed with the overall design: how minimalism represents the ultimate in trendy luxe, and also represents Una’s inner emptiness. Was this part of your vision from the start?

Nix: Yes, absolutely. My production designer Mark Guirguis and I had many conversations about how Una’s goal in life was to pare down and simplify, and we wanted her physical environment to reflect that change. I’ve met a lot of people who are in this phase. As they try and get healthy, physically and psychologically, they start to throw everything away, and you go over to their house and they have like two pillows on the floor. I never can relate to this because I am a total pack rat and always very cluttered. But more importantly, the design also resulted from economic necessity. We couldn’t create a complicated and busy look with the resources that I had.

SM: The film has already shown all over the world: in Oslo, London, Bergen (the setting of Petra), Torino, Barcelona, Sao Paolo, New York, Nashville, Miami, Los Angeles, Hawaii, New Zealand. Have local reactions varied, or is there a thread?

Nix: The response has been incredibly favorable, and we’ve been really excited by its reception. We won a number of awards over the last year, starting in Los Angeles with Best Feature and Best Actress at Outfest 2002. Since then we won an Audience Award in Torino, Italy, Best First Feature in Miami Gay and Lesbian, and Best Feature in Honolulu Gay and Lesbian. We’ve also gotten great critical feedback, including some good reviews in Film Comment, Variety, the LA Weekly, etc.

I’m totally fascinated by how different audiences react in different cities — especially in relation to the humor. In some cities people howl through the whole film (Los Angeles and New York) and in other cities you could hear a pin drop (Torino). I think it plays differently depending on a whole host of factors: the language barrier, and people’s knowledge of Los Angeles. There are a lot of ‘in’ jokes.

SM: Una is, of course, a control freak par excellence. As writer, director, and co-producer, do you identify with any of her traits?

Nix: Well, let’s just say that Una is a combination of many people, my mother, some of my old bosses, and me. I couldn’t have written her if I didn’t relate to her in some ways. Una is complicated — she’s vulnerable, egocentric, and above all a very powerful and charismatic woman. I think Una — like many women, including myself — has a conflicted relationship to her power: she isn’t wholly comfortable in it, doesn’t feel like she always deserves to have it, and thus acts out her shame in inappropriate and terrible ways. In that sense she serves as a type of nightmare for me — a reminder of what not to become.

SM: Another big difference between your film and "The Bitter Tears" is that we really feel for Una — partly because Selverstone is so touching, but it also seems to be written in. Stylish as the movie is, the ironic distance is lessened. Did you want viewers to be touched in this way?

Nix: An earlier version of my film was much more ironic, and it felt empty and flat. It ended with Una outside on her hands and knees screaming for her pet tiger, and it didn’t work at all. It’s very easy to make fun of Una, but it doesn’t feel as honest, and it avoids the emotional trickiness of the piece. Throughout the entire process it was always a question of: Do we play this comically or do we go for the gut? Or can we do both? When Una is flailing about on the floor throwing shoes and sobbing, I think it’s both. I’ve seen audiences cry and I’ve seen audiences laugh during this scene, and I don’t think either is inappropriate. I very much want Una to touch the fear in women that expressing what you really want might end up making you alone. Despite her bravado, and self-help talk, Una is desperately afraid of being alone, yet her actions virtually assure that she will be. She hasn’t figured out how to have agency in the world and still be intimate with someone, and I think many of us struggle with these issues.