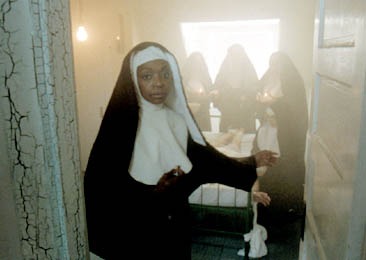 Images of "Mr Barrington," featuring the title character in a bowler hat and riding an old fashioned bicycle, may strike the viewer as being the sort of fare that is filmed in pastoral England. In reality, it’s filmed in rural Maine. Recently, I spoke with Maine-based Dana Packard (producer/director) and Jennifer Nichole Porter (writer/co-producer/composer/star) about their film which will be featured at this month’s Maine International Film Festival.

JM: You both have lengthy histories in theatre. What brought about the transition from stage to film?

Packard: In 1998, Jennifer suggested to me that we start our own film company. I thought it was a great idea because it seemed like the perfect way to be centrally involved in movies without having to live in New York or LA, which neither of us wanted to do, given our good theatre-in-the-country life here. As an actor, you have to be where the movies (auditions) are. As a filmmaker, the movie world can come to you. For a few years we tried to get representation in New York, and every signatory agent refused to consider signing us unless we moved. Five hours away was too far. Now, as a producer, instead of hearing "Maine? Why? Do you have running water…?" I hear, "Maine!!! My family used to summer up there. Isn’t it gorgeous? You are so lucky to be living your life in the woods, away from this rat race!" And they’re right.

JM: Jennifer, out of all the hats you wear for this film, is there one you prefer over another?

Porter: I prefer acting over the others, because it’s the most fun. Acting is never boring. Composing is sometimes boring, writing is half the time boring, and producing is ALWAYS boring! I like losing myself in someone else. I can live many lifetimes in just this one, which makes it addictive. I like acting so much that it’s worth the frustration. Composing is similar in that when I get it right, it’s worth having struggled. With writing, I might have to struggle for three months or a year or more, and I don’t like to work that hard! And producing…Well, enough said.

JM: Where did the idea for "Mr. Barrington" come from? And how long after you began the process of writing it was it put on film?

Porter: One summer day in 1999, my niece was playing a simple little tune on our piano, and the image of a man riding a bicycle, wearing spats and a bowler came to mind. I really didn’t have a point. I just started writing around this and other images. I didn’t know what the characters were going to do until they started doing them. It’s almost like they told me what they wanted to be.

I wrote "Mr. Barrington" as a short in 1999, then decided it’d actually work as a feature-length, so rewrote it three months later. At the time, it was on the backburner, as we were trying to raise funding for another screenplay of mine called "Cassandra Speaks." In August 2001, we started raising money for "Mr. Barrington," and began filming in June 2002, so I guess the whole process took almost four years, but it felt like less because of being involved with the other project.

JM: Where was the movie filmed, and what led you to choose the location?

Packard: The movie was filmed primarily in and around our house in Buxton. We picked the location because the house fit the bill in terms of the solitude the screenplay calls for, and there was no location fee! The beating the house and lawn took was the downside we knew would occur, but we figured they had been through worse (we bought the house for $10 in Portland in 1995, had it moved here in eight pieces, and have been renovating it since, between plays). The lumberyard is Chicopee Lumber in Buxton. Dick Pinkham, the owner, allowed us to shoot our day there for free. The convent / orphanage is Parsonsfield Seminary in Parsonsfield. The building is cared for by a group called The Friends of Par Sem, who kindly allowed us to film there for four days. Par Sem was the runner up for the primary location of The Cider House Rules. The building is extremely well maintained by The Friends, but they are always in need of support. People interested in the preservation of historic buildings who would like to help should contact The Friends of Par Sem, or Grace Gilpatrick, in Parsonsfield, Maine.

JM: Dana, are there any directors that you feel have raised the bar especially high or that have inspired you in some way?

Packard: For modern directors, I think Lasse Hallstrom has a beautiful touch, as do Ang Lee, Scott Hicks, and Jane Campion. I’m impressed with all of the above in their sensitivity to actors’ performances, overall rhythmic nuance, and visual composition. I think the Cohn Brothers are true visionaries, and I think Oliver Stone and Spike Lee are impressive in their use of film as social commentary. Spielberg, it seems to me, is a true master of the medium, as are Coppola, Scorcese, and De Palma. I think Baz

Luhrmann is amazing for his cynicism-to-the-wind theatricality and staging genius, and I love Christopher Guest and Monty Python. Terrence Malick… John Singleton… Those are names that pop to mind, but I’m sure I’m missing some who have also inspired me.

JM: Is "Mr. Barrington" merely entertainment, or do you hope viewers take something from the film, even if that something is the desire to see it again?

Packard: ‘Entertainment’ can mean so many things! For me, entertainment means being fully transported somewhere else for a period of time. This can be a light-hearted experience, as in a musical review, or intense and exciting, as in a thriller, or sorrowful, as in a heavy drama or beautiful piece of music, or all of the above in one evening.

I certainly hope "Mr. Barrington" is entertaining for people in the sense that they are involved on an emotional level throughout. So far, the movie seems to affect people in very personal ways, such as friends or couples who see it together wind up in lengthy discussions (sometimes heated arguments) about what this scene meant, or what was going on in that scene, or how they felt when this happened — and "How could you have felt THAT?" — and that is exactly as we would like it. And, yes, lot’s of people have gone right back in to see it again, which is of course the best situation of all!

JM: You’ve both been in Maine since at least 1988 when you founded The Originals theatre troupe. What unique characteristics does New England offer to filmmaking?

Packard: Aside from the obvious beauty and variety of locations, we have everything we need to make good movies here. Our crew base is strong, we have no shortage of excellent actors, we have major literary figures in our midst at all times, first-class training on the various aspects of film production (in Rockport and Boston) and plenty of capable producers, directors, cinematographers, and musicians.

And there’s plenty of money — it’s just a matter of helping people to realize that film is a viable industry for our area. I have witnessed while developing our projects a prevailing assumption that it’s impossible to make a movie locally and have it go anywhere or be seen by anyone. There is a general attitude that the cards are stacked against us, and that the whole enterprise is basically futile.

I think a well-kept secret is that moviemaking is extremely difficult and demanding no matter where it is done. The difference between Hollywood and New England (though this is changing) is that people here will tend to believe that the difficulty has something to do with an inherent limitation based on geography, because that’s what Hollywood wants everyone to think. If people around the country realized that movies can be made right where they are, tinsel town’s mystique would dim considerably. I have no desire to bring down the house, but we who want to make movies need to remind ourselves and each other that it’s just a hard, crazy thing to do, and that famous stars in Hollywood are beating themselves up and being beaten up just like we are to get their projects to the screen.

JM: Without giving movie spoilers, of course, are there favorite moments that each of you have in the film?

Porter: Scene 55 – the first night porch scene with Lila and Barrington. I love everything about it — dialogue, acting, music. I think it’s a very creepy scene.

Packard: I like that scene, too. The birthday scene is particularly disquieting for me. I like the final porch scene with Lila and Samuel, and I’m fond of the final few minutes of the movie.