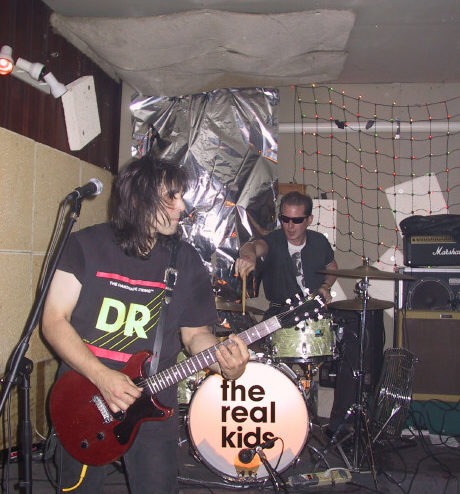 Share
Cheryl Eagan-Donovan talks about the making of her film 'All Kindsa Girls' to be screened as a work-in-progress at the Boston Film Video Foundation this month.

Cheryl Eagan-Donovan’s first film "All Kindsa Girls," documents the history of garage/punk rock from its roots in the ‘60s to its present day incarnations through bands such as the Strokes and the Explosion. In between, Eagan-Donovan focuses on John Felice and his band the Real Kids, revealing the impact of this vibrant music scene in Boston and beyond.

RT: How did you become so immersed in the punk scene?

Eagan-Donovan: I studied writing at Goddard College, moved to Arlington, MA in 1978, got involved in the local music scene, began writing promo material for bands, and met Clint Conley, bass player and writer for Mission of Burma. He introduced me to lots of other Boston bands including Lou Miami and Human Sexual Response. I began managing my first band, The Frantics, in 1980 and that’s how I met John Felice and Billy Cole, who were then in The Taxi Boys. I continued doing management and promotion for bands through my agency Miss Management throughout the 80s and early 90s, working with the Piranha Brothers, the Buzzsaw Frisbees, Sin City, Toetag, Johnny & the Jumper Cables, and Mung. In 1990, John Felice and I put together the first version of his band the Devotions.

RT: When did you realize you needed to make this film?

Eagan-Donovan: I was a member of the Winchester Writers’ Group, working on some memoirs about the music scene when it occurred to me that a film might be the best medium to tell the story of the specific time and place and characters who made the scene come alive. I had worked as a publicist on a few local independent film productions, including Roland Tec’s "All the Rage," Kaylyn Thornal’s "Payoff," and Zack "Could Be Worse!" so I knew a little about the production end of the business from that experience.

RT: How did you select the Real Kids as your primary subject? When did you start making "All Kindsa Girls"?

Eagan-Donovan: In April 2000, I saw the Real Kids perform at the Middle East nightclub with Chris "Bface" Barnard (of the Queers and the Groovie Ghoulies) on bass. Immediately after the show, I told Chris it was the best line up I had seen behind John in years, and I told John, "It’s time to do the film." He agreed, almost as if it were a dare. I had seen a live performance video of the Real Kids from their 1983 French tour, and was intrigued by some liner notes John had written: "Then we went to Paris. A lot happened over there. Maybe too much. It’s a story in itself." I went to Paris in May 2001, interviewed the band’s former manager and European distributor, Patrick Mathe, and the manager of the club they had performed at, Le Bataclan.

RT: Were your subjects cooperative? Did they need a little coaxing to volunteer information, and to be on camera?

Eagan-Donovan: The music community has been extremely supportive and cooperative. Almost everyone I’ve asked to do interviews has agreed, including some artists who don’t generally agree to appear "on the record." At the same time, there was a definite sense of protectiveness and loyalty that became a subplot of the film. It’s a very local attitude. We dubbed it "Boston vs. the World" when editing.

RT: Will we see a lot of performance footage in this film, or do you focus more on interviews?

Eagan-Donovan: I have tried to achieve a balance between "talking heads" and performance footage, but it has been a challenge. I feel strongly that too much performance footage quickly becomes boring for all but the most devoted fans, and I did not set out to make an extended play music video. That said, we have plenty of material for the DVD version of "All Kindsa Girls," and we have fans emailing us all the time, asking when it is going to be available. We had so much of both types of footage that the editing process was a little overwhelming at first.

RT: What was the most difficult part of making "All Kindsa Girls"?

Eagan-Donovan: Again, editing was difficult because there were so many musicians, fans, and family members eager to tell their side of the story, and so many bands willing to perform live material. In the end we had to make some choices about inclusion in an attempt to locate the true heart of the story. It took some resolve to stick with our decision to stop shooting, and I have to admit there are a few more artists I would still shoot and cut on a day’s notice, including Paul Westerberg and Alex Chilton.

RT: How did you put together funds for this project?

Eagan-Donovan: Funding for the project has consisted almost entirely of in-kind donations of services and equipment to date. Most of the crew’s pay was deferred, and we are still seeking funds to cover costs from both private and public sources.

RT: Whom do you cite as your influences?

Eagan-Donovan: My absolute favorites would have to be "Swindle" and "Hard Days Night," both of which are mixed media films, not unlike "Could Be Worse!" For traditional rock docs, of course Al Maysles’ "Gimme Shelter" and D.A. Pennebaker’s "Don’t Look Back" are two of the best. For documentary as a form, I am indebted to Wiseman and Fuller too.

RT: What do you think about Boston’s garage/punk scene, compared to the early days of punk?

Eagan-Donovan: The scene today is pretty vibrant, with bands like Mr. Airplane Man, the Downbeat Five, Triple Thick and the Conchs for purist garage, the Dents and the Explosion for pop/punk. Then with the Real Kids, DMZ, the Lyres, Kenne Highland, the Classic Ruins, and the Nervous Eaters all still playing out, at least occasionally, it’s still happening, a good mix of old and new. Of course it will never be the same as it was in 1976, when all the elements came together to produce what we have dubbed "the big bang."

RT: Do you consider yourself a writer first and a filmmaker second? How does one influence the other?

Eagan-Donovan: I am a writer first and foremost. What drew me to this project were the character, John Felice, and his story, both of which I found irresistible as a writer. I have never written songs or composed music, but I did write poetry in college, even read publicly at City Hall in Boston at the same time that Patti Smith was breaking out as a crossover artist, so writing has always been the connection for me. As John said in some Norton Records liners notes, "I guess I’ve always had a need to express myself."

RT: What film projects are next for you?

Eagan-Donovan: I have had informal discussions with several of the musicians I interviewed for this film, including Willie Alexander, Kenne Highland, and Jeff Conolly, about doing future projects. However, what I would most like to begin working on next is a narrative feature about a historical figure who happens to be a writer.