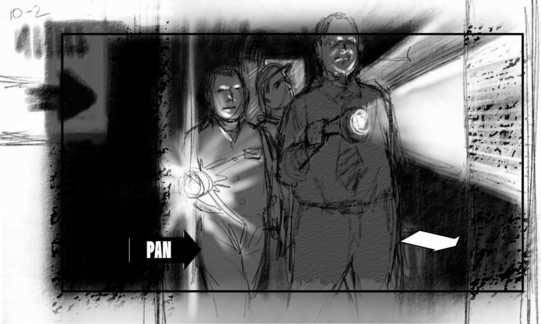 Share
David White explains the ins and outs of being a storyboard artist in this segment of the NewEnglandFilm.com 'How to Be a...' series.

Although they have probably never been thanked at the Academy Awards, storyboard artists provide a vital link in the complex chain of the collaborative creative process. Often referred to as "wrists," they are able to bring a director’s ideas to concrete visual life through a series of drawings. Indicating key elements such as camera angles and lighting, these images provide a clear focus for a project, helping filmmakers visualize how it all fits together. Storyboards can also add clarity to corporate client proposals, help designers develop their ideas, and quickly get new people up to speed on a project.

Being a storyboard artist "is an odd job," according to David White, "principal henchperson" at David White Storyboards. "You won’t find a meeting of storyboard artists. There’s no union or trade group. It’s a slightly invisible job without much acclaim." Trained as an illustrator, White figured out early on in his career that storyboards were his calling. "It’s more like playing (than illustrating for print)," he said. "You’re not responsible for the final image, which is very freeing. You’re not concerned about every detail. It’s a good fit for my personality," he said.

White graduated from the Massachusetts College of Art in 1982 with a BFA in Illustration. He freelanced for several years, at first illustrating for print, then taking on work at Business Graphics, Inc., where he was a project director, designer, illustrator and art director.

He created his first storyboard while doing print production work for the "Boston Business Journal." He landed the project through a friend’s referral, despite the fact that he "didn’t have much of an idea what storyboards were. The client gave me a script and I drew it up. I spent way too much time fretting over it, but he was very pleased. He actually told me, ‘You’ve got a future in this.’"

During the mid-to-late ’80s, as computers were eliminating the demand for the slide work that was paying White’s bills at the time, the artist decided that the time was right to make a change. Capitalizing on the need he perceived for storyboarding services in the presentation media industry, and his own desire to "draw for a living," White launched David White Storyboards in 1988.

Bolstered by a client base from his freelance years, and a business boom in the industry, White was able to get his company off to a strong start. "At that time, I couldn’t turn around without getting work," he said. "For five to eight years, I did virtually no marketing."

The momentum eventually died down, however, due to attrition among White’s clients and his desire to do more work from home. I was "getting into the family thing," he said. He bought his first computer around 1994, and soon became an early convert to e-mail. For his first big marketing push, White culled names of "anyone who could possibly use my services" and sent out targeted mass e-mails. Going through the process again three years later, he cast his net wider for more national work. "Word of mouth still means a lot," he said, "but (the market) is just not as active as it was in the late ’80s."

In addition to storyboards and other pre-production art, White provides illustration, animation and interactive design services. His wide-ranging client roster includes the Sci-Fi Channel, AOL studios and the US National Park Service.

The projects White takes on can be in the form of a script, treatment, or even just a verbal idea. He usually starts by asking a lot of questions to get "a firm idea of what the client is after." Some come in with a clear picture of what they want, he said, but others need a lot of help to solidify how they want things to look.

White communicates with clients via e-mail during a working process that can take anywhere from a day to three or four months. "Film stuff is always longer," he said. "Every director wants me to do something different." White can find himself participating in the brainstorming process on larger projects like Brad Anderson’s film "Session 9," or filling in on a corporate project when the designer doesn’t have time to create full-color or 3-D animation boards. "I have everything but typical days," he said. Working from home, he finds that isolation is the biggest drawback; however, he feels that this is the most efficient way for him to work.

One of the biggest perks to the job is the chance to learn new things. "It’s great, because I’m a very curious person," White said. Through his immersion in his projects, White has become a virtual expert on a wide variety of topics — a trait that can come in handy. He once was called to the editing booth of a long-delayed project. Months before, White had created 3-D boards for a video marketing a new antidepressant. The drug was made from a new molecule, and White was the only one involved in the video’s production who could explain how "some of these rather abstract theoretical representations (of the molecule) were supposed to move and interact."

White advises that aspiring storyboard artists should "love storytelling. But you have to be willing to let somebody else decide where the project is going to go, and to be willing to make changes. Once I’ve drawn a picture, I generally like it and hope that they’ll keep it the way it is. But sometimes they can’t tell you what they want until they see the picture and can say yes or no. You have to keep that in mind."

White is happy with his role in the creative process. "I have a director’s mindset, but I’m not overflowing with story ideas," he said. "I like being able to help someone else figure out their story. I feel really good about it when I can do that," he said, adding, "It’s great when they look at the board and say, ‘Yeah, that’s what I meant.’"