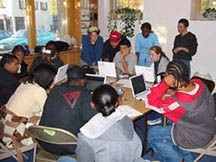 Share
The Massachusetts Cultural Council adapts to state budget cuts and prepares for the uncertain fiscal year ahead.

You may have heard the good news: film and video was one of six disciplines designated to receive funding through the Massachusetts Cultural Council’s (MCC) Artist Grants Program this fiscal year. It’s more likely, however, that you’ve heard the bad news: the MCC has seen a much-lamented 60 percent cut in state funding from last year, which, for the film and video community, makes an already rabid competition for grant money even more fierce.

The Artist Grants Program is one of three main ways in which the MCC supports film and video projects; the others being the Organizational Support Program, which allocates funds to organizations for use according to their own discretion, and the Local Cultural Council Program (LCC), which allocates funds to town, city, and regional councils, also for unrestricted use. Originally administered by the Boston Film and Video Foundation under the alias "Massachusetts Cultural Council Media Fellowships," the Artist Grants Program has since been appropriated by the MCC’s central offices. Within its framework, individual artists representing one of several designated mediums (there is a rotating list) are eligible to apply for a limited number of grants that can be used for anything from oil paints to daycare. This year’s grants are worth $5,000 each, significantly whittled down from last year’s top award of $12,500. The more modest runner-up awards, totaling $24,000 last year, didn’t even make it into the current budget.

The Artist Grants Program "has the largest impact on film and video," according to John Michael Kennedy, Communications Director for the MCC. Past recipients of Artist Grants include Brad Anderson of "Next Stop Wonderland" fame; Ross McElwee, whose "Sherman’s March" won the Grand Jury Prize for documentaries at the 1987 Sundance Film Festival; Margaret Lazarus of Cambridge Documentary Films; and Robb Moss, who recently followed up his critically acclaimed documentary "Riverdogs" with "The Same River Twice." Such a list of accomplished filmmakers makes one wonder what potentially great artistic contributions will be lost with the slashing of funds.

If the Artist Grants Program has lost some of its potency, the Organizational Support Program is not much better off. As the MCC’s largest and widest-reaching grant program, it provides vital funds to organizations like Cambridge Documentary Films, Women in Film/Video New England, The Boston Jewish Film Festival, the National Center for Jewish Film, and the Center for Independent Documentary. While matching other organizations’ funds, its three-year grants in turn serve to attract yet more grants, forming, for many beneficiaries, a crucial link in a chain of financial support. This year alone, Organizational Support Program grants garnered matching, private contributions of more than $25 million.

Crucial as the program may be, the MCC’s tightened budget has closed it to new applications, at least this fiscal year, and continued funding of currently supported organizations cannot be guaranteed for 2004. For many schools, studios, museums, community centers, and arts festivals that depend on matching grants, the unavailability of Organizational Support grants could cause a domino effect in their fundraising networks. According to a January press release, 70 percent of organizations participating in a MCC-conducted online survey said that "state budget cuts have negatively affected other fundraising."

Cuts in Organizational Support grants are also devastating because, unlike most types of funding, they can support an organization at many different levels. "That’s the hardest kind of money to get — money that’s unrestricted," Kennedy explains. "They can pay for a copier, they can keep the lights on." Mid-sized organizations, he says, are the "hardest hit," as they "rely fairly heavily on state funds for their administrative expenses." With a 59 percent reduction in funds allocated to the Organizational Support Program, these organizations are likely to see the kinds of major lay-offs and elimination of programs that the MCC itself recently experienced.

As for the film and video community, it so far continues to find some shelter in MCC programs, in part through Local Cultural Councils. This year the Ipswich Cultural Council gave $1,126 to S.A.F.E. (Survivor Art for Empowerment) Studio for a video project documenting the experiences of domestic violence survivors. The Gold Star Program, a new endeavor also overseen by Local Cultural Councils, recently put the spotlight on Cambridge’s Do It Your Damn Self!! National Youth Film and Video Festival, the only film festival in the U.S. organized and run by kids ages 12 to 19. The Local Cultural Council program remains the largest of its kind in the country: in spite of the deep cuts, it will have given roughly $1.6 million to towns and cities across the Commonwealth at the end of the current fiscal year

On another positive note, the MCC has responded to the financial crisis with more than just a refiguring of its budget. Last month it held its first statewide arts conference, sponsored by FleetBoston Financial, providing a much-needed forum for discussion about "fiscal health, public awareness, arts participation and collaborations." Entitled Arts in the Balance, the conference featured a keynote speech by Lieutenant Governor Kerry Murphy Healey, this year’s Commonwealth Awards ceremony, and a panel discussion and debate entitled "The Importance of Arts and Culture: Is Anybody Listening?" which included Speaker of the House Tom Finneran among its participants.

With over 350 people in attendance and much lively debate of pressing issues, Kennedy rates the conference a success, particularly in its affirmation of a supportive and concerned commonwealth: "It was an incredibly strong showing of support from the cultural community… it showed that [those present] felt part of a strong and vibrant state community. We will probably do a big conference every year from now on."

Arts in the Balance aptly embodies the MCC’s self-empowering determination to "act as a catalyst for talking about arts in the community," as Kennedy puts it. Rather than simply waiting for the economy to improve or grappling with setbacks in quiet isolation, the Council has actively sought relief and strategy through productive discourse with fellow organizations, with "plans to convene every couple of months."

There is no light at the end of the fiscal tunnel for the MCC just yet, but a draft of the 2004 state budget presented by the House of Representatives Ways and Means Committee on April 23rd approved a request that funding levels remain at least high as the current fiscal year. The Committee’s recommendations bode well for Senate budget proposals in June. "We feel like it’s a recognition of the fact that we received drastic cuts last year," Kennedy says of the House’s approval, "and that they recognize the value of arts and culture to the life of the state." This is only the first step in a lengthy process, but the results are encouraging, or at the very least, something of a relief.