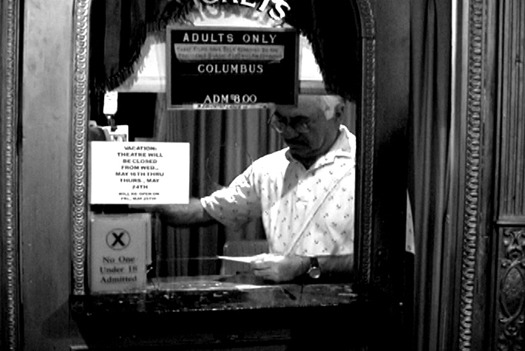 The Columbus Theatre recently moved from its sordid past as an adult film house to the forefront of the independent film scene in Rhode Island. John Lavall documented the theater’s remarkable rebirth in the documentary "Rated X — One Family’s Business," and this month he returns to the former Vaudeville palace for the premiere of his new film, "Goldie’s Move."

Inspired by the tough, sexy black women of early 1970s blaxploitation movies like "Cleopatra Jones" and "Foxy Brown," Goldie (Monica Williams) is a survivor. She’s spent some time in jail, and lost custody of her baby to the state, but now she’s been offered a chance for a new life. The catch is that she must betray Sonny (Broderick Smith), the father of her baby and her business partner. Sonny is struggling with his own dilemma: should he trust Goldie, or follow the advice of his right-hand man Clifton (Derek Ewings) who thinks it’s time to take her out of the picture? Added to the mix of drama are two strangers — a down-and-out grifter who owes Sonny money and a mysterious teenaged preacher — who make things even more complicated.

"Goldie’s Move" is the inspiration of Brett Davey, who wrote the original script and started filming on the weekends. A public relations director, Davey met Lavall through a commercial project Lavall was working on. The two became friends, and Lavall agreed to help Davey finish the film. "It was ultra low-budget," said Lavall. "I have all the filmmaking and editing equipment, so we only had to pay for a sound person and incidentals like location fees."

The film was shot on digital video at locations throughout Pawtucket and Providence, Rhode Island last summer. Lavall was particularly pleased by their experience in Pawtucket. As part of Mayor James Doyle’s efforts to make the city more artist-friendly, the mayor’s office went out of its way to welcome the filmmakers and help with location logistics. "They gave us anything and everything we needed," Lavall said. When they wanted to film in a pool hall, bowling alley and restaurant, they were granted access to a club that had all the locations in one building. The mayor also has offered the filmmakers free use of the Pawtucket visitor’s center for a possible screening of the film.

The hip-hop soundtrack provided by Yomo Kinsey and Sherman Christian of Boston’s Royalty Records was instrumental in shaping the film. Akida Nau, an actor in the film who also produces an R&B act, introduced the producers to the musicians. Lavall also credits the assistance of Adriana Minacapilli, who stepped in during the editing process. After watching a rough cut, she helped the producers cut some expositional dialogue and "make it easier to keep track of who’s who," Lavall said. "This was my first time editing something I’ve been involved in. It was a learning experience that will really help me on my next film."

Now 42, Lavall was a latecomer to the film industry. "I was in manufacturing in the Boston area before I got involved," he said. "I always wanted to do it, but I finally had the opportunity financially." He formed the company DevLo Media in 1997 as a "way that I could make a living and also make movies." The award-winning film and video production company creates video presentations and Web sites for companies including the American Cancer Society, Red Cross and CNBC.

Lavall has produced and directed several narrative and documentary films in both short and feature length form. His first foray into independent film was as the producer of "Tax Day," a narrative feature about two women who take a trip to the post office to mail their taxes on April 15 and meet people along the way. The film taught Lavall some harsh lessons about the financial side of the business. When the corporation he had formed with the film’s writer/director dissolved, "I got back a one dollar check from my $10,000 investment," he said.

Despite some financial setbacks, Lavall has found great creative success in the personal contacts he has made through his projects. An actor involved in one of his films introduced Lavall to the weekly open mic variety show at AS220, an alternative arts space located in Providence. Requiring only that performers are sober enough to get themselves up on stage and keep their acts to five minutes or less, the event draws an intriguing mix of people from all walks of life. In "The Pork Chop Lounge," Lavall explores the community formed around these shows, and the needs that being on stage fulfills for the performers.

For his next project, Lavall will direct and produce a documentary about another Rhode Island story, the unsolved abuse and murder of four-month-old Geri-Ann Richards in Pawtucket in 1984.

‘Goldie’s Move’ will premiere at the Columbus Theatre on April 27 at 5:00. ‘Rated X — One Family’s Business’ will screen at the Court House Center for the Arts in Kingston, Rhode Island on June 17.

'Goldie’s Move' will premiere at the Columbus Theatre on April 27 at 5:00. 'Rated X -- One Family’s Business' will screen at the Court House Center for the Arts in Kingston, Rhode Island on June 17. For more information about 'Goldie’s Move' visit www.goldiesmove.com. See www.devlomedia.com for John Lavall’s other projects. More information about the Columbus Theatre is available at www.columbustheatre.com.