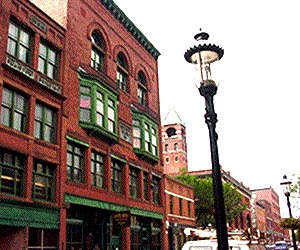 Share
Nate Longcopepresents a collection of one-minute shorts in the new One Minute Video Festival screening at the Evos Art Institute and other venues in the Northeast this month.

Getting your message out in 60 seconds — that’s the theme of the new One Minute Video Festival premiering March 7 at the Evos Arts Institute in Lowell, Mass. The festival, co-sponsored by the Revolving Museum, will showcase the latest ultra-short experimental and creative media.

Festival founder Nate Longcopesays he wanted to give people a chance to see some of the unique works being created — like the ones he’s been exposed to over the years. Longcopestudied film and video printmaking at the San Francisco Art Institute, where he was influenced by filmmakers Larry Jordan, Martha Colburne and George Kuchner. Jordan creates animation out of 19th century Sears Roebucks catalogs, while Colburne is know for the animated film "Spiders in Love." Longcopealso founded Massatucky Productions, which specializes in 60mm animation and puppetry.

The origin of the One Minute Video Festival dates back a year ago in Europe. Longcopeaccompanied his one-minute video entitled "Are they closed like everywhere else" to a film festival in Germany where he met up with a filmmaker working on an Amsterdam TV program called "Minuten." The program allowed students and artists alike to create one-minute videos.

"The show was a great success, it sold out every venue they took it to," says Longscope. When he returned the U.S., he teamed up with the Revolving Museum and together they came up with the idea for a festival here. They commissioned Nate to teach a video art class using the one-minute videos as an economic way to teach a short one-hour class twice a week.

Filmmakers showing their works at the upcoming festival include Walter Wright, Jason Daniels, and Andrew Hannah. Walter Wright is a "live performance" filmmaker who works at the Massachusetts College of Art in the computer labs installing software and maintaining networks. He also teaches video and new media at the University of Massachusetts, Lowell. Walter got his start in the early ‘70s when he created video animation for the General Electric Company.

"I was greatly influenced by the works of Stan Brakhage, who created what he referred to as ‘visual songs or poems,’" says Wright. Wright creates non-narrative film, experimenting with software that he develops himself. Called a video shredder, the program creates "new music and sounds of light." The computer allows Walter to create a 48-frame loop. "With the computer I control the speed and direction of the loop, the rate of capture, and all the effects that happen when the grabbed frame is overlayed and blended into the loop."

"Anything I can get at thrift stores and yard sales for cheap. I splice them adding my own sound art or various sound samples to create an absurd and often funny work of art," says Hannah. His work "Brady Bunch Discovers Jesus" is a video from his comedy group called Grand Mallarkey, who is currently working on a children’s TV show featuring hand-painting on film.

Participant Jason Daniels has been working in film and video for the past five years, and is currently involved with all phases of production at the Channel 10 municipal station in Lowell. He and Longcopemet when the Revolving Museum was planning to move to its current location in Lowell. Daniels is helping compile videos for the festival, which will just clock in under an hour. There have been submissions from all over the country, including South Carolina, Kansas, New York, New Jersey, San Francisco, Los Angeles and Boston, in addition to the Netherlands.

Daniels feels that the central point of the festival is that for those 60 seconds, it is possible to get a "snapshot into someone else’s head." The one-minute format, often non-narrative, is what Longcoperefers to as stream of consciousness: "art first, story second." It also serves as a reaction to today’s media saturation and provides a more fulfilling form of entertainment.