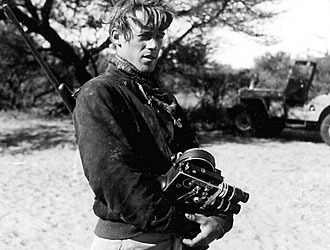 Share
The 50 years filmmaker John Marshall’s spent documenting the lives of the Ju/’hoansi, the native hunter-gatherer inhabitants of present-day Namibia, comes to fruition in the five-part 'A Kalahari Family' screening at the MFA, Boston.

Unless you are an anthropologist or an expert in the indigenous peoples of Southern Africa, interviewing filmmaker John Marshall is a bit like opening a window onto an extraordinary and complex new world. While the essential elements of documentary filmmaking rest at the core of Marshall’s work, understanding this filmmaker and the passion that drives his work requires one to learn about the unique people and culture that he documents. The Ju/’hoansi of Nyae Nyae are the subject of John Marshall’s latest film series, "A Kalahari Family," and remain the inspiration for his remarkable 50-year career as a filmmaker, anthropologist, educator and advocate.

"A Kalahari Family" is a five-part, six-hour series documenting 50 years in the lives of the Ju/’hoansi, the native hunter-gatherer inhabitants of present-day Namibia (formerly the German colony of South West Africa) and Botswana. This series represents the culmination of five decades of Marshall’s work with the Ju/’hoansi, as the first shots of the film were taken in 1950 and the last shooting trip occurred in 2000. Though the Ju/’hoansi are more commonly referred to in our country as "Bushmen," Marshall rejects this label as over-simplified and disparaging. "A Kalahari Family" challenges the stereotypical conception of the "primitive Bushmen," and instead seeks to demonstrate that, despite cultural and societal differences, the Ju/’hoansi are people just like us.

John Marshall began his career as a filmmaker somewhat inadvertently. In 1950 his father, Laurence Marshall, embarked upon a research expedition which was sponsored by the Smithsonian Institution and the Harvard Peabody Museum. This expedition was tasked with locating, studying and documenting contemporary peoples who lived by gathering wild bush foods and hunting game with poison arrows. A young John Marshall accompanied his father to southern Africa for this expedition.

"The first shots in the film were shot in 1950," Marshall explained. "That’s when my father and I took the first trip. We were looking for people who hunted and gathered, and we traveled throughout what was then South West Africa and Botswana, and finally found… these people who really did live by hunting and gathering."

The Ju/’hoansi of Nyae Nyae were one of very few hunting-gathering populations left in southern Africa, and were the only group controlling their permanent waterholes. It was on this pioneer expedition that John Marshall first encountered the people of Nyae Nyae, and equally as significantly, first began to document their lives. Marshall was asked by his father to contribute to the research effort by filming the daily lives and rituals of the Ju/’hoansi. This was something that he had not been prepared to do.

"I learned on the job. I didn’t have any training. My dad gave me the camera and I did pretty much the things that most people do when they get a camera for the first time. Kind of squish it around a bit… I was using a tripod alot to keep the camera steady and it became obvious the importance of a steady camera if you were going to make a good film and a good record."

Before he could film, however, a relationship had to be established with the Ju/’hoansi, and establishing this relationship meant that myths and fears would have to be overcome on both sides.

"When we first went it took us a long time to get prepared with trucks, equipment, food, and water. We had a lot of contact with people, both white people and black people, and the general sort of feeling, attitude, perceptions, towards Ju/’hoansi and other people called ‘Bushmen’ was that they were treacherous. And that they had no concept of, for example, time, no concept of property, no concept of society, social relationships, marriage, or anything like that. At one point we were told that they would hide behind bushes and shoot us with their little poison arrows and we wouldn’t even see them."

Of course, when the Marshall expedition met the Ju/’hoansi for the very first time it was a different story. Or, actually, at first not that different of a story at all. Upon initial contact the Ju/’hoansi of Nyae Nyae did not know for certain whether the Marshall party was friend or foe. These hunter-gatherers had fears of their own. They had heard rumors of what the whites had done to other bands of Ju/’hoansi, some of them their relatives in the south, and the rumors were that people were killed, and beaten and made to work, and that their lands and water had been stolen from them by white farmers. The Ju/’hoansi watched the Marshall expedition for a couple of days and then finally made contact. And so this remarkable relationship began more than 50 years ago.

From this point, deciding what to document was a relatively straightforward process. "My dad did not want films. My dad wanted a record. A visual record," Marshall explained.

"He wanted me to make a film record, and we started out with a book published by the Royal Anthropological Society in London called Notes and Queries… It was prepared for British colonial officials who were living way out in the country and living with all kinds of people all around the world, in their empire. And it was what they [anthropologists] could do to find out what the economy was, the diet, marriages, what the customs are like, namings, you know… basic ethnographic data."

Marshall and his father turned that book into a list of things to film. Marshall started with technology, filming people making arrows, people making spears, people poisoning arrows. He filmed dances, hunting, and ceremonies. Today, the Smithsonian houses this comprehensive film record of daily life in Nyae Nyae. Soon, however, Marshall’s own interests led him beyond the straightforward visual record his father envisioned, and he began expanding upon what he chose to film. As a youth Marshall particularly enjoyed participating in the hunt with the Ju/’hoansi men, and this then became the subject matter for his first film "The Hunters" (1957). Marshall added good-heartedly, "Dad wasn’t too thrilled by it."

Following this first film, Marshall went on to produce 19 additional films all of which document various aspects of Ju/’hoan life and culture. His work represents dozens of trips to Africa and years spent in the company of the Ju’/hoansi. Having shot over 1 million feet of film and hundreds of hours of video, Marshall has created a visual record of incredible magnitude, but his work is of value far beyond the film community. Ethnographers and anthropologists continue to learn from Marshall’s films, and educators throughout the country use his videos in their classrooms. But do not call John Marshall an ethnographic filmmaker, for he does not see himself in that light.

"I know that some academic people seem to think that I make ethnographic films. I have no real idea what that is. What I shoot [in Nyae Nyae] is documentary and it is just exactly the same as I shoot here except, I would say, for the language. That is an obstacle at the beginning." Marshall went on to explain one other significant challenge that he faces that other filmmakers may not. One must "learn some things that you probably wouldn’t learn if you lived in the city." For example, as one might expect, John Marshall had little experience hunting big game with poisonous arrows when he first arrived in southern Africa. "It took me a while to learn enough about it so I could hold my end up a little bit, and be a part of what was going on, be one of the group. "

Not only was Marshall able to learn enough to "hold his end up a little bit," he was able to form a lasting connection with these people who were once so foreign to him. "A Kalahari Family" is made possible because of Marshall’s intimate knowledge of and respect for the Ju/’hoansi. The film is a continuation of Marshall’s incredible filmmaking legacy — and a poignant examination of a half-century of change that engulfed, and sometimes ravished, the Ju/’hoansi.

Part one of "A Kalahari Family," "A Far Country," introduces the viewer to the Marshall family and to ≠Oma Tsamkxao and his band of Ju/’hoansi. The next four programs continue to follow ≠Oma and his extended family as they struggle to survive in a changing social and political landscape. Over the course of five decades, the Ju/’hoansi experience dispossession, confinement to a homeland, the chaos of war, apartheid, drought, and the struggle between traditional Ju/’hoansi ways and the development of established farming communities. It soon becomes clear that there is far more to the story of the Ju/’hoansi than meets the eye, and that their political and cultural history is both complex and compelling. Through the years, Marshall maintained close ties with his Ju/’hoansi friends, and continued to document their lives. Yet, though technology has advanced significantly since Marshall first began filming, his primary emphasis remains the same — the Ju/’hoansi people.

"The basic thing that I think you have to decide if you are going to shoot documentary is who is more important — the person at the other end of the camera or yourself. And if you swish your camera around and take quick shots and don’t let people finish their sentence, that is telling the people that watch it that you think you are the most important thing. If you get close to people… watch what they do, listen to what they say, hold the camera steady, let them finish, get involved with angles, distances, and cuts…get involved with using those things with people themselves — then you are saying they are more important. And that is the lesson I learned."

Marshall has also learned many other lessons through his association with the Ju/’hoansi. I asked him what he thought was the most important lesson a viewer could take from "A Kalahari Family."

"I think the biggest lesson is, first, the most important — that they are not, as some anthologists call them, ‘the other.’ They are people just like us," says Marshall. "And the second thing is that these perceptions, these myths that people have about other people can be terribly destructive — and that was the worst thing that the people of Ju/’hoansi had to face."

With the release of "A Kalahari Family" John Marshall continues to battle the myth of the "Bushman" and to work towards a greater understanding of the Ju/’hoansi. Though Marshall believes this will be his last film on the Ju/’hoansi of Nyae Nyae, he has no doubt left behind a lasting legacy — a legacy that will continue to promulgate the important lessons he learned and passed on to us through his unique brand of documentary filmmaking.