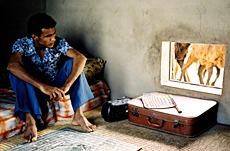 Share
African Film Festival, Tromadance, upcoming screenings, and more... A report of news & events in the local industry for February 2003.

The Museum of Fine Arts Boston (MFA) Film Program will present The African Film Festival on February 6-March 1, 2003. The festival includes a collection of shorts and features. For more information, visit www.mfa.org.

The 3rd Annual Chlotrudis Short Film Festival will be held the Coolidge Corner Theater in Brookline, MA on February 26th, 2003. The program features drama, comedy, foreign-language, documentary, and animated films from the U.S., Canada, Ireland and The Czech Republic. For more information, visit www.chlotrudis.org or www.coolidge.org.

The Boston Underground Film Festival, which is usually hosted in February, has been postponed until April 23, 2003. Details will be posted closer to the festival on www.bostonundergroundfilmfestival.com.

The Milky Way and The Underground Film Revolution presents "Independent Exposure: Select Favorites" on February 3, 2003. The program features 16 film and video mixed-media shorts made by filmmakers from around the world. Please call 617-524-3740 for more information about the event.

"Met State," by Boston filmmakers Bryan Papciak and Jeff Sias, was selected for the 2003 Sundance Online Film Festival. Please visit www.sundanceonlinefilmfestival.com to view the short or for a description of the film.

Boston resident Adam Roffman was the on set dresser for the film "Camp," which, was chosen for the dramatic competition at Sundance this year. Roffman’s short "The Terror of the Invisible Man" screened at Tromadance 2002 in Park City, Utah. More information about "Camp" is available at www.sundance.org.

"Everyone’s Got One" by Belmont native Garth Donovan will screen at the Coolidge Corner Theater on February 12, 2003. Donovan raised the money for his film by working as a garbage man and redeeming cans and bottles donated by people on his route. For more information visit www.coolidge.org or www.everyonesgotone.com.