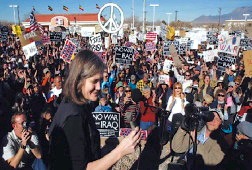 When television first debuted to a curious world, it was considered to be merely an extension of radio, another outlet for entertainment shows. But the speed with which it became omnipresent in households around the world revealed its potential as a powerful tool in the dissemination of information, the shaping of social and cultural movements, and the influence over political systems.

Unfortunately, this potential has lain largely untapped as much of television continues to provide only mindless, homogenizing entertainment. Content is determined by ratings, commercial sponsors, and network executives who want to keep their jobs by not taking risks. As a result, TV only reinforces mainstream ideas instead of challenging them. Even news programs choose entertainment value over content when deciding what stories to cover. Public television arrived in the 1960s with the promise of alternative and educational programming, but it too never fully realized its potential. And Cable TV, with its abundance of channels, offered a new glimmer of hope of access to stories and ideas not seen or allowed on commercial television. But once again, that has failed to meet initial expectations.

Fortunately, for those looking for a true alternative, there is a channel out there devoted to broadcasting challenging, informative programs on diverse topics and news events rarely given airtime on regular television: Free Speech TV (FSTV). FSTV is dedicated to social justice, human rights, and environmental issues. Because it is not constrained by ratings and sponsorship demands, it can bring forward the viewpoints of those overlooked in mainstream TV, such as minorities, indigenous peoples, the poor, and the gay and lesbian community. A concern for tolerance and diversity, not corporate sponsors, dictate its content.

Started by John Schwartz in 1995 as The ‘90s Channel, it was originally broadcast in 10 cities, but was soon priced out of its ability to lease cable time. But Schwartz, a longtime media activist who over the years has set up a number of foundations, including ITVS, to support and promote educational programming, would not give up. He was determined to address the lack of alternative, thought provoking programs on television. Important voices were not being heard. Social issues that affected all of us were not being discussed. Out of this determination, The ‘90s Channel was reborn as FSTV.

"We put together blocks of programs and distributed tapes by mail to 50 public access stations around the country, while at the same time trying to get back on cable or a satellite network," says Brian Drolet, the Web Project Director for FSTV. The hard work paid off, and in 2000, FSTV was picked up by the Dish Satellite Network on channel 9415 (DirecTV declined). "Dish reaches about 6-7 million homes, and we’re now on 70 public access channels, so that adds up to a potentially big audience," says Drolet. Today, the Boulder, Colorado company is run by a staff of 15 people and many interns and volunteers. Completely non-profit, it depends on funding from foundations and individual gifts.

Schwartz is interested in the collaborative relationship between art and activism, recognizing the immediate power of both visual and audio media to inspire, provoke, and influence our thoughts and behaviors. According to its mission statement, FSTV hopes to "use television to cultivate an informed and active citizenry in order to advance progressive social change," by promoting "participatory democracy, grassroots organizing, and cross-community dialogue. Its primary goal is to educate viewers to the world around them, and to elicit reactions that motivate positive action, whether that takes place on an individual level, a community level, or on the bigger world stage.

Running 24 hours a day, seven days a week, most of FSTV’s programs are packaged into two- hour blocks. They buy films and videos of any length (information on submitting is available on their website), and they cull their choices from film festivals, independent producers, and unsolicited submissions from around the world. Mixed in with the documentaries is live coverage of various events, including a live weekly feed of "Democracy Now" from New York City.

In 2000, FSTV began producing its own programming, including live broadcasts of the Republican and Democratic Conventions and the recent anti-war demonstrations in D.C. in October, 2001 and this past January. "We did four and half hours of live coverage in D.C., and our signal was carried by Wordlink and broadcast on three other satellites around the world," says Drolet. Another original production, "The World in Crisis," was a by-product of the 9/11 tragedy. Shown three times a day, it began as a series of five-minute programs on issues surrounding the war on terrorism and our civil liberties. It has now morphed into "Mobil-eyes," 12 hours of new programming centered around a different theme every month. Replayed throughout the month, the most recent theme focused on the various ways that people create peace in their lives and communities.

Films are also packaged into nightly series during primetime hours. Each night documents a different aspect of social justice. "Just Solutions" presents films on worldwide human rights on Monday. "Earth Actions" addresses environmental issues on Tuesday. On Wednesday, "Unconventional Wisdom" examines the past and how it affects our views of the future. Thursday’s "American Voices" profiles the diverse lives and stories of everyday people across America. And "TV Guerillas" showcases those who use video as an instrument of social change. Each series is rebroadcast throughout the week.

Viewer feedback has been mostly positive, according to Drolet. "We get hundreds of calls when a program premieres. Generally, [FSTV] gets a strong response. People either really like it or they hate it." In addition to its television programming, FSTV also maintains a comprehensive website, freespeech.org, that provides program schedules, hosts discussions, and runs over 1000 audio and video clips. "It is the largest site for streaming progressive audio and video on the Internet," says Drolet, who has been in charge of the site since 1999.

FSTV hopes to continue producing more original programming and finding new ways to provide alternative viewpoints. They have recently bought an old Greyhound bus and outfitted it as a full mobile production studio, complete with a satellite uplink, so that they can do more live coverage from the road. As for the future, "we’d very much like to be on cable TV," says Drolet. "That’s our next big goal, to get our own cable channel and expand our audience as much as we can."

And hopefully that time is not too far off. Commercial television, by its nature, is limited by its dependence on corporate sponsorship. Networks earn more money by earning bigger ratings, and documentaries, particularly those on social justice, are not a big audience draw. No one denies the value of pure entertainment, but in this world of one "Survivor" clone after another, isn’t it nice to know that there is an alternative available, one that is not afraid to confront human rights issues and stories that affect all of us individually and as a world community?