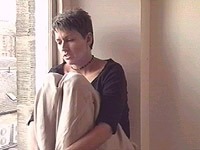 Share
Director Laurel Chiten delves into the world of alien abductees in her latest documentary 'Touched.'

Director Laurel Chiten says that she "keeps making the same film over and over again." Of course, the parallels between Chiten’s stories of alien abductees, individuals with Tourette’s Syndrome, and a Jewish writer and group of rabbis on a trip to meet the Dalai Lama may not seem obvious, but each is driven by the search for a sense of connection, Chiten explains.

Chiten recently completed the documentary, "Touched," which will premiere on February 20, 2003 at the Museum of Fine Arts in Boston. The film focuses on people who believe that they have experienced alien encounters. This is not the typical tabloid treatment of the topic, but rather an exploration of real people looking for answers. Whether or not the subjects’ stories are real, it is clear that each individual’s life has been irrevocably transformed by their quest to solve the mystery of their experience.

The central figure in the story is John Mack, M.D., a Pulitzer Prize-winning author and Harvard Medical School professor who suffered public and professional ridicule when he became a "believer." Mack approached Chiten about making a film based on his research. She initially had no interest in the subject, but agreed to accompany Mack to hear some alleged abductees, or "experiencers," speak. Chiten became intrigued once she met the human beings behind the wild stories of bodily probing and alien/human-hybrid breeding programs. She wondered, "What happens when the unexplained intrudes into our lives, and how do lives and relationships respond when credulity is strained to the breaking point?" The resulting film is "not really about aliens," Chiten said. "It’s about what people do when they’re dealt something difficult."

"I’m interested in underdog stories," Chiten said, "giving a voice to people outside of society’s norm. The films are all about going on a journey. And they all have a spiritual underpinning, and a similar sense of humor."

Chiten finds storytelling to be the most compelling aspect of filmmaking. A certified American Sign Language interpreter, she started her career writing and directing deaf theater productions. She was drawn to film as a way to use her own voice. Her first major project was as producer, director and co-writer or the 5-part satirical lesbian soap opera, "Two in Twenty. " Originally shown on public access, the series has attained cult status on home video.

She created her landmark documentary about people living with Tourette’s Syndrome, "Twitch and Shout," with the intention of following it up with a narrative film. Diagnosed with a mild case of Tourette’s herself, Chiten hoped to raise awareness about this often misunderstood genetic neurological disorder which can cause uncontrollable muscle tics and vocal expressions. The film "put Tourette’s on the map," Chiten said, and eventually garnered nationwide airplay on the PBS series "P.O.V.," in addition to an Emmy nomination and numerous other honors. However, after five years in production, she was left debt-ridden, exhausted and vowing never to make another film.

But Chiten did not keep that vow for long. Looking for spiritual solace on a Buddhist chat room one night, she discovered the book "The Jew in the Lotus" by Roger Kamenetz, a best-selling account of the 1990 visit of eight rabbis to India to meet the Dalai Lama and share "the secret of Jewish spiritual survival in exile." Kamenetz, who was recovering from the death of his baby, tagged along to chronicle the event, and was transformed by the experience. Chiten was inspired to take on the difficult task of translating a book with very little narrative into a film. Over the course of production, the theme of the film evolved into an exploration of the ways in which spirituality can help people deal with suffering.

"Filmmaking is a lot like falling in love," Chiten wrote for the premiere of "The Jew in the Lotus" at the 1998 San Francisco Jewish Film Festival. "We have no control over who we fall in love with. … I never look for a story but wait until I ‘fall in love’ with something that I simply cannot say no to. Then I become elated and driven totally amnesiac, forgetting how difficult the ‘relationship’ can be."

"The Jew in the Lotus" was broadcast nationwide on PBS’ "Independent Lens," and has screened around the world. It was honored with the Most Outstanding Personal Vision award from the New England Film and Video Festival.

Among Chiten’s other projects is "Houses of Healing," a 10-part series she produced based on Robin Casarjian’s emotional awareness course for prisoners. Chiten also is a frequent public speaker, and a teacher at the Boston Film and Video Foundation, Maine Photographic Workshops and the Digital Media Workshops. An artist-in-residence at several prestigious artists’ colonies, Chiten was honored with the Artist’s Fellowship for creativity in video production from the Massachusetts Council for the Arts and Humanities in 1987. She served as a documentary juror at the 2001 Florida Film Festival.

Chiten said that she still hopes to make a narrative film some day, but says, "Documentary ideas keep presenting themselves to me. Who knows what I’ll do next?"