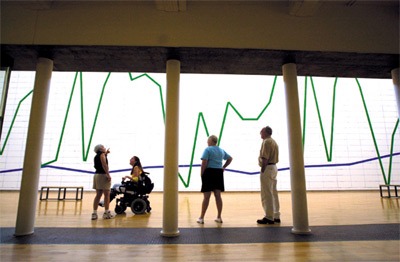 The Northampton Independent Film Festival (NIFF) bills itself as "a gathering place for those seeking alternatives to the offerings of major studios." From locally produced films like festival favorite "Adrift" to the Japanese animated feature "Sprited Away," NIFF presents a broad vision of the best in independent film and video.

Now in its 8th year, the festival is one of the premier events in Northampton’s rich arts calendar. This year’s festival will be the largest yet, and organizers promise "a much more festive and interactive event."

New Festival Director David Kleiler has big plans for NIFF. "We want Northampton to become a regional mecca for filmgoers interested in discovering new work and in sharing their reactions and information. By developing audiences with an appetite for artistic adventure, we will also help the film and video makers reach a greater number of viewers. In addition to providing a forum for conversation about films and the issues they raise, the Festival will be a platform for discussing the broader nature of independent vision in the media," he said.

Kleiler is well known in the film community as the founder and director of Local Sightings, a Boston-based company that helps filmmakers get their films "made, sold, and seen." Also serving as Artistic Director of the Boston Underground Film Festival, Kleiler has worn many hats — exhibitor, professor, collaborator, producer and mentor – throughout his 30-year career in the film industry.

Emphasizing the films over the hype, NIFF offers audiences a chance to experience more adventurous works than usually make it to the local multiplex. It will screen an impressive roster of experimental, gay and lesbian, and student films, in addition to more than 85 short films. The seven programs of shorts are grouped around such intriguing themes as "Surreal Reels Starring the Virgin Mary and a Blueberry Pie" and "Of Madness, Mayhem and Decay."

Among the features screening are "Made Up," a coming of middle age comedy about beauty and aging starring Brooke Adams and Gary Sinise; "Lifestyles of the Poor & Unknown," Nancy Fliesler’s affectionate portrait of her mentally disabled sister’s struggles to live a normal life; and "Mai’s America," the acclaimed film about a Vietnamese high school girl’s eye-opening year in rural Mississippi.

NIFF continues to highlight the work of New England filmmakers, with a "Special Local Focus Day." The slate includes "Loaded Gun: Life and Death, and Dickinson," a documentary taking a sometimes unconventional look at the life and poetry of Amherst’s own Emily Dickinson; and "Downside Up?" Nancy Kelly’s look at the changes the arrival of an art museum has fueled in her once-dilapidated hometown of North Adams. The festival also offers an eclectic array of special events, including a screening of the "The Black Pirate," a silent swashbuckler starring Douglas Fairbanks. The Alloy Orchestra will accompany the film live. The film is presented through the participation of United Artists, a company founded in the 1920s by D.W. Griffith, Charlie Chaplin, Douglas Fairbanks and Mary Pickford to preserve and control independence in filmmaking.

This year, NIFF will introduce several new film programs, including an experimental series dedicated to filmmaker and Smith alum Maya Deren. NIFF has partnered with Film Circuit, an integral part of the Toronto Film Festival, for the special program "North-of-the-Border," which will feature films by critically acclaimed Canadian directors including Atom Agoyan, Patricia Rozema and David Cronenberg. Highlights of the series are the United States or New England premieres of the Canadian independent features "Maelstrom," "Un Crabe dans la Tete" and "Khaled." The festival also has enlisted the aid of the film departments of the areas five colleges to attract participation in the experimental and student film competitions.

Audiences can deepen their experience this year through four free panel discussions. Northern Arts Entertainment’s David Mazor and Larry Jackson join independent producer Laura Bernieri to discuss "Getting Your Indie Film Shown and Distributed." Actress, Screenwriter and Producer Lynne Adams ("Made Up") is among the panelists discussing "How Do Gender Issues Play a Role in Film Making?" After many years in the business, writer Steve Adams is finally seeing a screenplay of his become a real movie – although the reason is a mystery to him. He will share war stories at the panel "For Art and/or $$$: Screen & TV Writing Today." One of the films screening at the festival will be discussed during "Fencing with Fidel: The Making of ‘Gift of the Game.’"

Festival attendees will also have plenty of networking opportunities at post-screening drinks and pre-panel coffees, and at the NIFF Bash and awards presentation where guests are encouraged to come as their favorite 20th century actor.