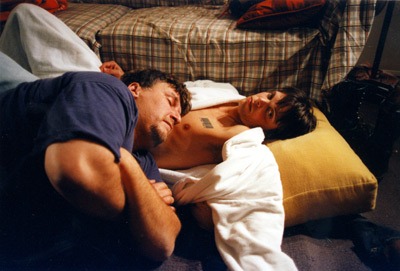 Director Mary Feuer is haunted by her past. A Boston native, Feuer moved to Los Angeles four years ago but can’t seem to sever her hometown ties. Friends she thought she’d left behind keep popping up in California in a transnational bond that just won’t break. Her east coast connection has proved beneficial career wise, however, supplying a lifeline to Feuer’s new short film, "Rock Bottom."

Though Feuer directed, produced and co-wrote the short, she emphasizes that longtime friend and fellow former Bostonian, John Militello, fathered the film. "In a lot of ways this is John’s story in terms of the writing," Feuer says of "Rock Bottom." Militello, Feuer describes, wrote the "Rock Bottom" screenplay based on his life experiences then presented the script to her to film. The result — a gritty short that captures an emerging affair between a young street hustler and an overweight writer — is the latest in a history of collaborations between the friends who met in Boston 20 years ago while co-casting a play.

The casting for "Rock Bottom" was halfway complete before it began. "We always knew that John [Militello] would be the lead," Feuer said of selecting actors for the two-man drama. Filling the role of the street hustler was more difficult. To help with the delicate task, Feuer and Militello enlisted a casting director who brought in over 50 teenagers to audition for the part — and Militello chose the first actor they saw. "Tim is a movie star in the making," Feuer describes the chosen aspirant, Timothy Lee DePriest. Deciding to cast DePriest opposite Militello was easy: "We just knew it was him… he had exactly the right energy."

With a cast in place, the writing duo still needed a crew to make their brainchild a reality. Producer Saki Fenderson stepped in. Fenderson assembled the 20-odd crew members to work on the flick. Feuer, who planned to shoot the short in video, knew her choice of media would make finding a director of photography difficult. "It was hard finding a DP that shared my aesthetic," Feuer explained. "I had specific ideas on how to work with video, and for most DPs it’s considered slumming to learn video. They all want to shoot film." Fenderson’s choice for the "Rock Bottom" DP surprised Feuer. The director never imagined finding such a well-suited DP, much less that the he would be Neil de la Peña — the gaffer for "Ellen West," Feuer’s first short filmed in Boston 10 years previously.

Outfitting Feuer with a lead and a DP, Beantown would also provide the setting. For three days in February 2002, Feuer and her crew shot "Rock Bottom" using as the principal set an L.A. apartment owned by Boston-based production company, Picture Park. For transition footage, Feuer shot scenes of Santa Monica Boulevard. Twice during editing Feuer realized the need for more material and took to the streets. "I’d realize that there was a hole we needed to fill, so me and Neil (de la Peña) would go riding around and fill it," said Feuer.

Editing ended within days of film’s west coast premiere at Outfest’s July 2002 Los Angeles Gay and Lesbian Film Festival. Premieres in 10 film festivals in a slew of locales from Chicago to the Czech Republic followed. Choosing which festivals to show the film in and when has been a chess game, describes Feuer. "Film festivals almost only accept premieres, so you have to be picky about the order you do them in," she said. Once a film has premiered in a city or region, Feuer continued, other festivals in the area won’t accept it: "I don’t want to do a little festival and have it eliminate me from one of the big festivals."

In addition to location, another key consideration when choosing film festivals is audience composition, Feuer states. "Our strategy was to concentrate on our core, gay audience first, then to gradually enter the mainstream festivals," she said. After a program of gay film festival showings, The Hamptons International Film Festival October 16-20, was "Rock Bottom’s" first "straight" premiere. Three more mainstream festival showings are scheduled for November. Such straight-friendly venues will be standard in the coming year, Feuer said, in an attempt to gain a broader audience for the film. Although "Rock Bottom" has gone over "phenomenally well" with gay audiences she assures, "Rock Bottom" is not strictly a gay film, but a flick for all "lovers of character-driven independent film."

Identification with human nature, not sexual orientation, is the root of the film’s appeal, "It’s a very human story… it shows that none of us is quite who anyone thinks we are," says Feuer. Through directing, she strives to capture this theme of humanity’s duality. "If I’m doing this thing right, there should be a moment when there’s a shift in the way the audience looks at the character." She admits feeling most gratified when viewers, so engrossed in the characters’ story, forget societal boundaries on sex and sexual preference. "I’m gladdest when [audiences] see the movie and it doesn’t occur to them that it’s not directed by a gay man, but a heterosexual woman."

Confident in the universally compelling power of "Rock Bottom," Feuer and co-writer Militello are creating a full-length version of the 22-minute short. "People kept asking, ‘what’s next?,’" Feuer says of the film. Such audience interest encouraged Feuer and Militello to continue with their original expansion plans. "[‘Rock Bottom’] was not meant to have a beginning, middle and end… it’s a snapshot of the beginning a relationship," Feuer says, "The feature will take you through the whole story." Currently composing the feature-length screenplay with Militello, Feuer predicts production for the movie to start in 2003.

In the meantime, Feuer considers distribution offers for "Rock Bottom" and perfects her directing skills. As a fledgling director 10 years ago, Feuer made "Ellen West" with no crew and no film training. Today, though the narrative short was Feuer’s first film endeavor, the director considers "Rock Bottom" her first picture. Time and experience are Feuer’s justifications for her new outlook. Since "Ellen" Feuer has served as Production Supervisor on Oscar-nominated "In the Bedroom," and produced the independent features "Floating" and "Barstow 2008." Despite her numerous production experiences, however, Feuer professes to still have much to learn about directing, and hopes "Rock Bottom" will be a new beginning on a course to develop her craft. "I learned a lot as a producer, but I continue to actively put myself into educational situations," she says, "I’m still very much a beginner."