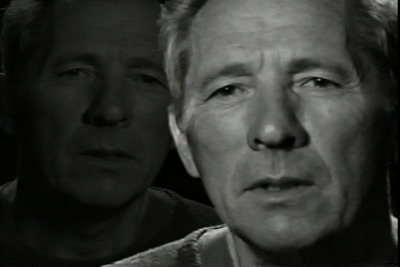 Share
Reviews of several films screening at this month's Boston Jewish Film Festival -- '3 Weeks After Paradise,' 'The Collector of Bedford Street' and 'A Home on the Range: The Jewish Chicken Ranchers of Petaluma.'

Everyone remembers where they were when they first heard of the terrorist attacks on the World Trade Center, and everyone remembers the emotional and psychological shock the news inflicted. But few of us truly felt this as deeply as those who lived there, who saw it happen overhead and worried for the safety of loved ones. Playwright Israel Horowitz’ monologue "3 Weeks After Paradise" recounts his day of terror and the weeks that followed, detailing his worry, fears, and growing depression and anger.

A resident of Lower Manhattan, Horowitz could not help but be deeply affected, but like many, he had something dear at stake: his teenage son Oliver is a student a Stuyvesant High, directly across the street from the towers. As he and his wife sit out the day in an apparent calm, given the circumstances, they both harbor fears that he might not be alive. Ollie turns out to be safe and sound, but the experience, just for an afternoon, of facing the possibility that his child might die before he did, leads Horowitz to brood on the cycle of life and death, of the role of survivors. Confronted with the signs of loss every day, Horowitz finds himself unable to shake his malaise. A trip to a distant Boston suburb brings at best a chuckle of disbelief at his relatives, who dread a new attack in middle-of-nowhere Massachusetts. Horowitz’ entire world has been turned upside down, and he doesn’t know how to recover.

"3 Weeks After Paradise," then, constitutes both confession and an act of defiance, an exorcism of the demons that plague him since his pre-September 11 life was taken from him. Numerous family photos and films, plus scenes of the day and its aftermath, add to the haunting monologue, making the film a powerful statement of one man’s despair and his attempts to reconcile himself with the horror he sees.

"3 Weeks After Paradise" will screen on Thursday, November 14 at 8:00 pm at the Museum of Fine Arts, Boston.  Director Israel Horowitz in person.

"The Collector of Bedford Street"

Larry Selman, 59-year-old resident of New York’s Greenwich Village, has raised over $125,000 for local charities. He pounds the pavement daily, asking for donations, collecting for one cause after another. But Larry is far from your typical charity pusher: Larry is mentally retarded. He lives off his weekly Social Security checks and the money he can get from his uncle Murray who has begrudgingly but faithfully taken care of him ever since Larry’s parents died over 30 years ago. Larry is famous throughout the area, calling his many neighborhood friends a daily basis.

Director Alice Elliot lives across the street from Larry, and her film "The Collector of Bedford Street" shows him to be quite a character, as engaging as any I’ve seen in recent memory, whether he’s visiting his parents’ graves or plaguing the Block Association by opening his doors to the homeless when he’s lonely. Larry gives selflessly — some might say compulsively — to the needy, while barely making ends meet himself. His uncle, already over 80, isn’t getting younger. So a bunch of neighbors band together in the attempt to establish a trust fund in Larry’s name. "Collector" documents their initiative, but wisely focuses most of its attention on Larry himself. You can see how he’s raised all that money. Once he’s got your attention, he doesn’t let go. Give him a try.

"The Collector of Bedford Street" will screen on Monday, November 11 at  3:00 pm at the Museum of Fine Arts.  Director Alice Elliott in person.

"A Home on the Range: The Jewish Chicken Ranchers of Petaluma"

It reads almost like an epic myth: Where they came from, they were shopkeepers or professionals, forbidden from entering trade guilds or owning land. In Russia, in Poland, all over Europe, Jews found themselves the victims of persecution. Many who could afford it fled to America, where they took up the occupations they had held at home, the trades they already knew. But anti-Semitism in America, although certainly present, was not as institutionalized: Jews could hold any type of job, Jews could own land, Jews could farm. And so, even as far as New York City, news spread of a little town not too far from San Francisco called Petaluma, a little town of chicken farmers — Jewish chicken farmers.

Bonnie Burt and Judith Montell’s documentary, "A Home on the Range: The Jewish Chicken Ranchers of Petaluma," tells the story of Petaluma’s Jews, from their first settlements around the turn of the century to their ultimate assimilation into American culture. The film details a century of struggle, as the community strove to establish itself in a new land, lived in fear of neighbors with German sympathies during World War II, found itself beset by the McCarthyism that followed, and, above all, tried to keep the chickens healthy.

Burt and Montell interview a cross-section of the populace, from young to old, offering different political and religious perspectives and painting a complex picture of a vibrant community. "At Home on the Range" provides an interesting historical look at a the lives of Jewish immigrants in America.

‘A Home on the Range: The Jewish Chicken Ranchers of Petaluma’ will screen on Monday, November 11 at 3:00 pm at the Museum of Fine Arts. Director Bonnie Burt in person.

'A Home on the Range: The Jewish Chicken Ranchers of Petaluma' will screen on Monday, November 11 at 3:00 pm at the Museum of Fine Arts. Director Bonnie Burt in person. For a complete schedule, visit the Boston Jewish Film Festival web site at www.bjff.org.