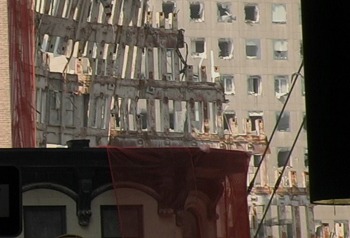 A Dialogue on the Unimaginable

Soon after filmmaker Walter Ungerer learned of the September 11 attacks on the World Trade Center, he felt compelled to turn on his camera. Having attended a conference blocks away from the site on September 10, Ungerer returned two weeks later and attempted to make sense of an unimaginable moment in time.

In "Ground Zero — Critical Perspectives From Vermont," Ungerer combines footage shot at the scene of the disaster with a series of interviews shot in Vermont, to explore issues surrounding the terrorist attacks and their aftermath. In the film, Ungerer provides a forum for voices that he believes have not been widely heard in the mainstream media.

"All we hear is the government’s position," Ungerer said. He believes that there is an increasing demand to know more about the situation. "When people have a level of awareness that’s not very sophisticated, they think that retaliation is the answer," he said. "But lately, reason has been taking over." Through the film, Ungerer hopes to spark dialogue about topics such as the history behind the attacks and the effects of U.S. foreign policy.

The experience of making "Ground Zero" reminded Ungerer of the early days of his four-decade career. Although he is best known for his experimental features and computer-animated videos, Ungerer also has focused his camera on such diverse documentary subjects as the Vietnam War, Nigeria’s struggle for independence, and threats to art education in Vermont public schools.

Like most of Ungerer’s films, "Ground Zero" evolved organically. Throughout production, "something would show us where to go next," he said. He had originally sought to interview high-profile subjects such as Noam Chomsky and Yoko Ono, but that proved unrealistic. While attending forums on the terrorist attacks at Norwich University and Champlain College in Vermont, he decided to film some of the panelists, including a former head of the CIA anti-terrorism unit. This lead to interviews with more local subjects, such as a Vermont National Guardsman who was shocked at the resentment towards the United States that he encountered in Saudi Arabia, and a man who was at his office near the World Trade Center during the attack. A history professor from St. Michael’s College outlines the history of the Israel/Palestine conflict in the film, and Joseph Gainza of the American Friends Service Committee and Progressive candidate for lieutenant governor Anthony Pollina discuss US foreign policy.

Although all of the subjects interviewed are from Vermont, Ungerer believes that the history discussed in the film make it relevant beyond the region. "I’d like to show it wherever possible," he said.

Although Ungerer acknowledges that the title "seems to suggest a liberal film," he doesn’t want to just "preach to the choir" of politically progressive filmgoers. Hoping to reach a "mainstream audience that’s searching for more information," he strove to present a balanced perspective on the issues.

Ungerer currently teaches at the University of Vermont. After studying architecture, painting and sculpture at Pratt Institute and Columbia University, he worked as a freelance cameraman and editor, eventually turning to independent production. He has completed 15 films, including four features produced through his non-profit production company, Dark Horse Films. Ungerer taught at Columbia’s School of Film, Radio & Television for several years, and moved to Vermont in 1968 when he received an offer to teach at Goddard College. His work has screened at festivals and competitions around the world, including the Athens International Film Festival, where he won Best Feature Film for "The Animal" and a Merit Award for "The House Without Steps." He has been honored with special exhibitions at institutions including the Museum of Modern Art, and received an American Film Institute Independent Filmmaker grant and a National Endowment for the Arts Media grant.

Although he is currently devoting most of his time as a filmmaker to getting "Ground Zero" seen, Ungerer has begun work on a project dealing with pain and "people who have had very traumatic experiences." He is not sure what the end result of the project will be, but he trusts his intuitive process. "That’s the experimental nature of the project," he said.

"Ground Zero — Critical Perspectives From Vermont" aired on Vermont Public Television and has screened around New England and upstate New York. It will play at the Vermont International Film Festival (VIFF) this month.

The VIFF is dedicated to promoting politically progressive and challenging material. Films compete in the categories of War and Peace, Justice and Human Rights, and the Environment. The festival also screens local films non-competitively in the Vermont Filmmakers Showcase.

For more information about the Vermont International Film Festival, see www.vtiff.org or contact the festival office at 802-660-2600 or info@vtiff.org. See www.darkhorsefilms.org to order copies of Walter Ungerer’s films.

The VIFF is dedicated to promoting politically progressive and challenging material. Films compete in the categories of War and Peace, Justice and Human Rights, and the Environment. The festival also screens local films non-competitively in the Vermont Filmmakers Showcase. For more information about the Vermont International Film Festival, see www.vtiff.org or contact the festival office at 802-660-2600 or info@vtiff.org. See www.darkhorsefilms.org to order copies of Walter Ungerer’s films.