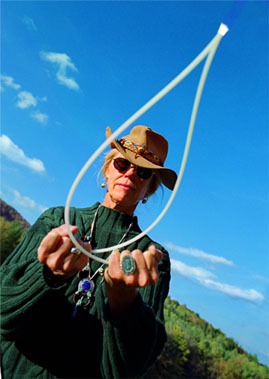 All in the Family

If you think you’ve seen every version of the family documentary, think again. Cambridge natives George Kachadorian and Courtney Bent have created both an unusual and charming first film that surely diverges from all expectations.

Their film "Divining Mom" is a quirky documentary about Kachadorian’s mother Lea, a dowser, a.k.a. "diviner," who claims to be able to find underground water supplies — or most anything else — using her dowsing/divining rods: a forked stick, a pendulum, and her "extended" senses. Meanwhile, Lea’s husband Jim is a civil engineer who has yet to embrace his wife’s involvement with the paranormal folk art… to put it mildly. Determined to get to the bottom of the family debate once and for all, their son, George Kachadorian, brings us on a wacky, non-narrated journey into the world of dowsers, skeptics, and one Vermont marriage that’s got one of each.

And if that’s not enough family entanglement for you, there’s the film’s producers Kachadorian and Bent, who also happen to be husband and wife.

Having spent five years making their film, they’re now reaping some of the results of their hard work. The film recently showed to audiences at the Manchester and Nantucket Film Festivals, and has upcoming screenings at the Rhode Island and Northampton Film Festivals.

PB: Can you tell me a little bit about the dowsing population?

Kachadorian: There are over 20,000 dowsers in the U.S. You can pull off the highway into any town, big or small, and find dowsers in the area. We found a lot of our interviews that way, including a great Mormon rancher in Salt Lake City who dowsed water wells during his missions to Africa.

The dowsers range from old salt of the earth New Englanders who learned dowsing from their great grandfathers, to teenagers like Cassie Epstein in Dallas who credits dowsing with "how she’s passed a couple of her chemistry tests so far." We met everyone from pig farmers to Laser Physicists to Hydrogeologists to Tarot Card Readers — all dowsers.

PB: The editing is really exceptional in the documentary.  Can you tell me about your training?

Kachadorian: I learned editing by editing "Divining Mom." I was one of those guys who said, "rather than go to class to learn about it, I’ll just go out and do it." I think of this as analogous to jumping onto a 5,000 ft. cliff and then deciding to learn to rock climb. It’s a little scarier perhaps, but it can be done. Thanks to my old friend Wilson Chao at Cambridge Television Productions who let me use spare editing parts in his storeroom after my budget ran out, I was able to go nocturnal and learn the Avid "the hard way." You know those stories about chimps who get locked in a room with a typewriter and eventually churn out a Shakespeare sonnet? I understand that chimp, but luckily, a human, I have a better memory, so I’m hoping it will be easier next time…

I was also self-funding the project through freelance video gigs, and I learned a lot on various jobs.

PB: How long did the project take to finish?

Kachadorian: I honestly thought it would take one year. It took six. (including the necessary freelance funding operations — I actually probably spent about three years of work directly on "Divining Mom," spread out over six).

Kachadorian: The flip side of being a totally unfundable beginner is that you’re not beholden to anyone’s "sensibilities" but your own. When working for big networks, I feel like I’m on one of those massive Viking ships with 100 oars sticking out its sides. If all of the rowers don’t row in unison, the ship doesn’t sail straight. In return for their rowing, all oarsmen get a steady wage and a roof over their head. By contrast, my independent productions, like "Divining Mom," feel like a bunch of coconuts lashed together with a stretched out sweatshirt for a sail. You’ve got no guarantee you won’t capsize tomorrow or get eaten by a shark, but you’re allowed to row however you see fit. And not only do you get to row your own way, you actually get to set compass bearings and steer, something reserved for only the most senior of Vikings. "Divining Mom" is an example of what happens when imposed stylistic constraints are removed.

PB: Where do you see future documentaries going?

Kachadorian: I believe that we as a species are still just at the beginning of realizing the power of the medium we’ve stumbled upon here. I mean, we’re still treating moviemaking like a toy — like a roller coaster ride. There’s nothing wrong with making fake dinosaurs spring to life or convincing kids that they’re being chased by axe murderers. That’s all good. But on some level it’s also like using a fine violin as a whiffle ball bat. Sure it’s a heck of a lot of fun, but I believe that there is also a much larger charter for the instrument. Fueled by unprecedented access to the necessary tools, I believe we’re at the beginning of a renaissance of the medium.

PB: Being that you are an original documentarian, what are some of your influences?

Kachadorian: I saw Ross McElwee’s "Sherman’s March" at an especially impressionable age, and was profoundly impressed by his ability to tell a personal yet watchable story (a rarity). And not only was it watchable, it was fascinating. It made me want to grab a camera and go out and make a movie.

I’m almost ashamed to say that my influences include very few docs. I like comedies, and growing up in Vermont, I didn’t know of too many documentaries that made me laugh. I still don’t. It’s like there’s an unspoken code of documentary ethics, which says that if you’re smiling, you can’t be serious. I take exception to that. My documentary influences include "The Blues Brothers," "Strange Brew," "Spinal Tap," "Star Wars" — those are the films that kept my attention, and in turn taught me the sensibilities I use in the edit room every day.

PB: How was it to work with family?

Kachadorian: If you like your family, it’s fun. And, from a doc perspective, it’s easy because you’re always going to get a chance to reshoot it.

Kachadorian: The next thing is playing now on ABC. It’s a 5-part documentary series following murder trials titled "State v." (Wednesdays at 10 p.m.). It’s more producer Michael Bicks’ thing than mine, but I’ve been shooting and editing the series for over a year now (while completing "Divining Mom.") Next up, we’ve got my co-producer and wife Courtney Bent’s first documentary, which is in the can, and ready to go, following a photography program she started for people with severe disabilities. And after that, I’m chomping at the bit to develop a mock doc idea I’ve been brewing…

PB: Does dowsing have any metaphors for life?

Kachadorian: Dowsing is one of the few places in our world where the spiritual rubber hits the road. A lot of people make a lot of claims about prayer and God and who’s side God is on, or how much the intention of the mind can influence the external world, but dowsing is a place where they actually have to prove it — on every job. It’s one thing to have faith in something like life after death, it’s another thing to have faith in a rock climbing rope when you jump over a cliff. Dowsing forces the believer to put his or her beliefs at the mercy of the physical world. And yet, despite impossible "scientific" odds, generations of dowsers continue to claim to be finding things.

On a more personal level, dowsing is a kind of an intuitive search. There are times in our lives when logic is all we need to get by. "Which road gets me to work the quickest?" or "How can I find the cheapest air conditioner?" are logical questions, the likes of which we solve every day. But occasionally in our lives, we’re forced to make "big" decisions, the kind where logic falls shy. Like "what do you want to be when you grow up?" or "is this the spouse for me?" or "what are you trying to say with this film?" I’d argue that the most important questions in life can only be answered that way — by taking a step into the uncomfortable unknown with nothing but a little prayer in your heart to guide you.