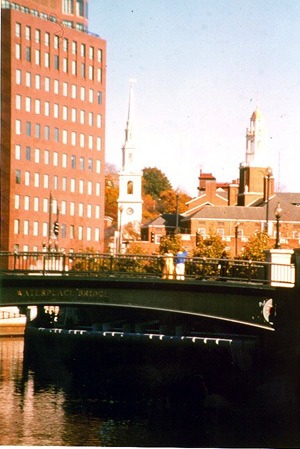 If you think your kid may be the next Spielberg or just would like to get a shot at moviemaking, there is a unique opportunity located locally in Rhode Island. Executive Director, Eleyne Austin Sharp created Kid Filmmakers this year to bring kids to another world — the filmmaker world. The company’s mission is to promote and encourage self-esteem, creativity, and discipline through the art of filmmaking.

Kid Filmmakers, a traveling academy, teaches children between the ages of 9-14 the art of acting, animation, directing, editing, screenwriting and videography. All great film lingoes for us adults, but for kids it’s just plain fun. For those two weeks, they are brainstorming, writing, acting, editing, operating a camera, and making important decisions about their creation. Each kid chooses story ideas, camera angles, shots, scenes and ambience.

Sharp knows the world of film and the world of kids well. She has produced local cable television shows in Marblehead, Massachusetts and has worked for WETA-TV in Washington, DC and the nationally acclaimed syndicated show "America’s Black Forum with Julian Bond." She moved to Rhode Island over 10 years ago. "The moment I laid eyes on Newport — all those flowers and green trees and ocean — well, I knew this is where I wanted to be," she says. Since then, Sharp has served as Program Director for Kidseye International Film Festival, Kidseye Filmmaking and currently is a board member of the Newport Cultural Commission. She also teaches the screenwriting workshop for the traveling academy.

"I knew I wanted to continue to work with kids but on a year-round basis, so I decided to create my own program which would allow me to do that. Then I spoke to a number of filmmaking and education professionals and they were all enthusiastic about the idea of a year-round filmmaking academy in Rhode Island, particularly one that could travel from place to place," says Sharp.

With two upcoming events this summer, one July 8-19, 2002 and the other August 5-16, 2002, Kid Filmmakers will temporarily take place in Providence and Newport, Rhode Island. Then once the kids are there, they can go anywhere their imagination takes them.

And Kid Filmmakers is not stopping there. They are in development for "Flying Popcorn!" a new cable television program showcasing local and international children’s videos created by adults and children. So moms, dads, uncles, aunts and cousins can all join in on the fun! Since Kid Filmmakers is a traveling academy, there may be plenty of more events in the coming future. Kid Filmmakers is available year-round to schools and organizations for after school, weekend and summer sessions.

Let me give you a peek into their upcoming world. From 9 a.m. to 4 p.m. for two weeks this summer 15-20 students are taught by experienced film industry professionals with credits from Dreamworks to the Discovery Channel to AOL/Time Warner.

"I know some camps like to pack in 40 or 45 kids because they’re more interested in how much money they can make. But to me, the bottom line is about the kids, not the revenue," says Sharp. "When the classes are small, the kids are more attentive and there is less competition for cameras and crew positions. They also enjoy more attention from the staff and instructors."

And just in case the kids would like to showcase their work after the summer workshops, Kid Filmmaker’s Web site at www.kidfilmmakers.com lists great resource information such as children’s film festivals, studios and contests. With their imaginations you just never know.