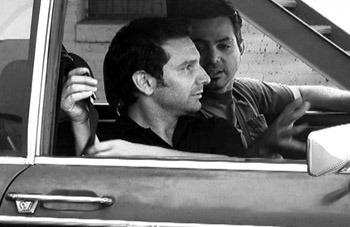 With an impressive list of credits under his belt (assistant editor on "Meet Joe Black" and "Analyze This" and editor of the local feature "Made Up"), Michael Matzdorff took the leap to directing with his first short film "The Belt." A two-and-a-half-minute film, the story depicts an overly safety-conscious Bud as he guides Blacky in the challenging task of getting the passenger seat belt of his 1973 BMW buckled. After showing his film to a delighted crowd at this year’s Nantucket Film Festival, NewEnglandFilm.com talked with Michael about the making of the film and his future as a filmmaker.

PB: How did you become a filmmaker?

Matzdorff: I attended college in Santa Barbara, CA at Brooks Institute of Photography, studying mostly photography but later stumbling into motion picture. Through college and for 10 years after, I worked in post-production on commercials, TV and feature films.

I have been developing a feature film which I plan to direct and "the Belt" was an exercise to see if I was in the ballpark for being able to execute some technical aspects of direction: angles, screen direction, etc.

PB: Are you formally trained as a filmmaker? Do you think that filmmakers need formal training?

Matzdorff: I touched on motion picture in college, but most of my training came in the editing room. I’ve always been a good observer. Observing other directors who were working with their footage was how I learned. Angles, lighting, performance, learning why scenes worked or didn’t, seeing mistakes in production which could be fixed in editing or required re-shoots — all of these things are invaluable. Anyone who plans to direct needs to spend time in editing first.

Formal training? My belief is that no amount of formal training is a replacement for practical experience. It certainly can help some progress more quickly and execute more efficiently, but.… as friend of mine once said, "get out of school and your first job will be making coffee, or you can just start making coffee."

PB: How many films have you made so far?

Matzdorff: One short is finished, and one more is ready to go in to production. I also have one feature script that’s ready to go and one that I’m currently writing.

PB: The piece is only two minutes and 45 seconds, yet it is effective in that short amount of time. How did you decide when to end the piece?

Matzdorff: I had boarded pretty extensively and really wasn’t concerned about how long (or short) we’d be. I tried to really milk it without seeming as if it had been milked. One person at the festival mentioned he could have stood another 30 seconds or so, I’m glad I left at least one person wanting more.

I chose to end it when I did simply because it felt right. We toyed around with a few different endings, having the car not start was an afterthought.

PB: Everyone keeps talking about the "Use your Chi" part. Where did that arise from?

Matzdorff: Actually, it is "focus your Chi." Sometimes metaphysics work better than logic and patience. I learned that in Tai Chi class in the early ‘90s.

PB: What is your next project?

Matzdorff: Currently, I’m cutting a TV movie for the USA network in LA. I soon plan to shoot another short titled "No Regrets." I’m trying to raise a couple million bucks for a script I’ve optioned and will direct called "No Beer in Hell" and in my spare time I’ll finish my script "Frank Charles."

PB: In "The Belt" you directed yourself. Did you find that challenging?

Matzdorff: No, I just tried to be natural. Did it work?