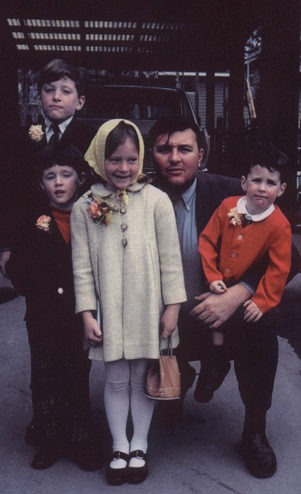 Tom Curran talks of his experience during the making of his acclaimed personal documentary ‘Adrift.’

Every filmmaker faces challenges. However, when making a personal documentary, the filmmaker may be moved so deeply by the making of the film that he or she is transformed in the process, on the deepest of emotional levels. It is as if filmmaking becomes cathartic, or “therapeutic,” and can sometimes change the direction of a film while being made. The key challenge then becomes to attempt to reach the audience, if not in the same way the filmmaker was touched, in a similar way. Tom Curran, during the making of “Adrift,” a personal narrative on the death of his father, goes through this type of cathartic experience, and consequently succeeds in elegantly conveying his experience through technique and storytelling that, in the end, touches the audience as well.

Eight years in the making, “Adrift” was originally a documentary on fishing titled “Night Train.” Following a period of production, it became clear that the film itself was not about fishing, but rather about Curran’s struggle with the death of his father decades before.

“The lows of making ‘Adrift’ were most intense earlier on as I was making the transition back from 1996 to 1999 from a fishing documentary to the story not told in ‘Adrift.’ I had spent some time personally to sort out buried emotions and memories from my childhood and at the same time trusted that what I was exploring could become the fabric for this film in transition. For several years I wasn’t at all clear what exactly the film would become.”

And what the film became was a personal story on the difficulties of being a young boy growing up with his father’s over-burdening expectations, and the consequences those have on his adult life. In the film, Tom depicts a point where his fear of his father feels catastrophic, and his feelings for him while he’s alive begin to decay because of how loathsome he has become of sports… his father’s love and joy. But, then the unexpected happened: his father died. “By the time I was 12-years-old, my Dad was dead. After that, my family mostly remembered Dad by telling stories of how great he was, and what a special family we were because of him. I promised myself that I would be number one at whatever I did like Dad would have wanted,” says Curran in the film.

From that moment on, he martyred himself and tried to be the best that he could in what ever arena he found himself in: hockey, tennis, and eventually cinematography. Curran became a documentary cameraman with ABC for 10 years, and during such time he won an Emmy. It wasn’t until he nearly died in the jungles of Belize, that Curran realized his drive for success wasn’t his own, but rather his father’s. It was then that Curran truly felt his father’s death, and remembered as a child that it wasn’t just grief he felt, but as well happiness to be rid of his father’s influence over him. Curran expresses in “Adrift,” “I was 37, the same age as my Dad when he died, before I could finally admit why I couldn’t let go of his expectations.”

The making of “Adrift” was not without pleasant moments, however. “The most exciting moments for me when shooting ‘Adrift’ came when I was in Alaska and Cape Cod shooting the recreations of my childhood. On a small scale I was creating fictional screens with Super 8 film that captured the mood, texture, and feelings I remember when I was hitting a tennis ball, practicing hockey, and just standing next to my Dad when I saw my first bald eagle,” says Curran. “The film gave me a vehicle to work through the emotions surrounding my father’s death.”

Once realizing the new direction of his film, Curran decided to take the personal documentary and expand on it. He explains, “I was trying to expand storytelling in the personal documentary, by presenting a personal narrative that employed classic-three-act story structure to make a film that felt cinematic. I didn’t want to make a film where part of the storytelling was me saying things like, “After my interview with my mom, I began wondering about how my sister felt about dad’s death. So I took the camera to Alaska to find out.’” He goes on to say, “We wanted to express the story through the use of metaphors, landscapes, aerial photography, and the different texture of Super 8 film were employed to evoke the inner emotions of the characters in the story. Additionally, the original score provided Celtic-influenced music that helped direct and accentuate dramatic moments.”

Today, aside from screenings, Curran, with the assistance of William S. Pollack, PhD, who wrote “Real Boys: Rescuing our Sons From the Myths of Boyhood” is reaching out to kids in an effort to suggest to them that they might need to lighten up. Curran thinks that the current state of childhood is rather frightening. “We are in a frightening time, our children, particularly boys, do not know how to express their emotions.” And combined with Pollack’s outreach, he hopes to have “Adrift” screened to a younger audience.

“Adrift” is a hard look at the thought process one goes through when experiencing both happiness and grief of the loss of a parent. Through metaphor, super 8, sports, and interviews of close friends and family, and an elegant musical score that works to infuse different dimensions of space into the story, one will be forced to reflect upon their own expectations, where they have come from, and their consequences. And by doing so, and much the way Curran did himself during the making, one will come to realize just who they are, expectations aside, and for the first time in a while, feel liberated.