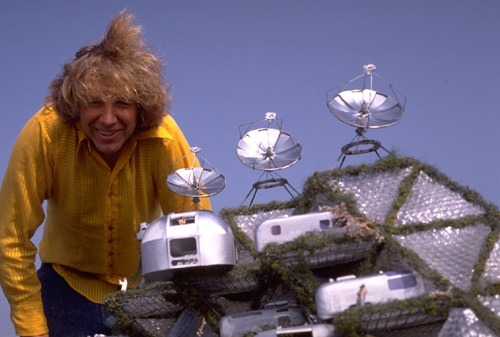 Share
Boston Filmmaker Lucia Small calls into question the meaning of the words genius and father in her first nationally successful feature film 'My Father, the Genius.'

THIS JUST IN (June 12): MY FATHER, THE GENIUS received the: "Grand Jury Prize" at the Atlanta Film Festival – the top award of the festival. and "Best Documentary" at the Newport International Film Festival.

"I thought it was a good title," Lucia Small says regarding her most recent film, "My Father, The Genius." She’s right, of course. It is a good title — a challenging title. Placing the word "genius" next to anyone’s name is a bold stroke. Even bolder when the person is a family member.

But then it’s an evocative title as well. Because there really are two assumptions present in it, although not immediately obvious. The first, the claim of genius, is immediate. How does this woman justify calling her father a genius? Later, when we discover that it is Glen Small who in fact considers himself a genius, we are even more skeptical, even more requiring of proof.

The second assumption is less apparent until you’ve seen the film, but it’s equally important. After the life he’s lived and the choices he’s made, how does Glen Small justify calling himself a genius and a father? This raises the two questions — What is a genius? and What is a father? — which carry us willingly and convincingly through the next 84 minutes.

"Many creative people have trouble with family," Lucia says. "It’s part of the whole notion of obsession — being impassioned, having a drive that’s above and beyond such things as family duty. And trying to challenge an established community in any discipline — it takes a lot of energy to make that happen."

It’s the irony of genius really, and it’s especially ironic in regard to Glen Small’s particular genius. In his architectural designs, Glen Small strives to create harmony — environmental harmony, human harmony. He strives to design in a way that is holistic.

Perhaps the most important work of Glen Small’s life is his Biomorphic Biosphere, a city that a close friend describes as more of a hammock, only touching the earth in a few places, otherwise suspended — the ultimate harmony of the urban and the natural. Glen Small is concerned that the people living and working within his buildings and cities feel integrated, that they escape the prison of concrete and asphalt, of right angles and straight lines imposed on the earth and on our lives.

"He wanted to work more on the Biomorphic Biosphere," Lucia explains. "The film treats that kind of superficially, but he worked with engineers, environmental experts, other experts. Of course, practicality is always a big question, but there are engineers he has worked with who say that it’s doable."

But on a personal level Glen is largely unable to achieve that same integration, that same holistic sense. He is individualistic to the point where it cripples his career, his romantic relationships, and his relationships with his daughters. The architect of harmony lives a life of discord.

Then again, here is his daughter making a film about him, putting that powerful word next to his name in the title, documenting his work and his life — perhaps not in the manner that Glen intended when he originally asked her to write his biography, but certainly presenting his work and his vision to a new audience, or at least to an audience that probably hasn’t heard his name in some time.

Were his designs the work of a genius? Well, to what extent can genius be portrayed in an 84-minute film? Throughout "My Father, The Genius" various people affected by Glen Small’s life and work try to define that word "genius." The director herself makes a vivid visual attempt at a definition by superimposing the heads of other geniuses over her father’s body: Martin Luther King, Jr., Ghandi, John Lennon.

Maybe it was the image of Lennon that got me thinking about dreamers that prompted me to ask Lucia about the difference between a genius and a dreamer.

"My father always said Follow your heart, Lucia," Lucia says. "Throughout my life, and throughout this project as well. He’s conflicted… like most human beings are. He is quite arrogant and has this strong sense of wanting to be recognized. But then you can tell by the way the film ends that I am totally able to identify with him… I’m able to pursue this film and film in general because of him. I’ve chosen to follow my dream."

I wasn’t surprised by this identification of the filmmaker-daughter with her father. Filmmaking, for those so inclined, is a way of pursuing one’s own type of genius, although in Lucia’s case it’s a pursuit phrased less aggressively using words like "experimentation" or "creativity."

So what does it mean to be a genius? To make the claim of genius for oneself is without a doubt supremely arrogant. The word suggests that one’s life and legacy have stood the test of time, have influenced uncountable others, have brought something new into the world.

But Lucia’s telling of her father’s story helped clarify that word for me. Again, maybe not in a way that Glen Small might have wanted. But how ironic is it if all our lives we see our genius in one thing, only to find out later on that it in fact lies somewhere else. In something apparently more mundane and yet no less meaningful, no less difficult. In something as simple and profound as a life, a lifelong relationship, or an inspiration.

When the personal becomes the universal through our own efforts, when it is projected on the screen in front of an audience of viewers and critics and other filmmakers, we open ourselves up enormously. We risk not just criticism of our artistic talents, our particular usage of the medium to tell our story — we also risk censure of our own lives and lifestyles. Commentary on the film becomes to some extent commentary on our families, our personal choices well beyond the scope of being an artist or filmmaker.

Lucia Small takes this risk, following powerfully, if somewhat less tumultuously in the footsteps of her father and his own risk taking. Whether she achieves a work of genius, whether she convinces you that Glen Small is a genius — those are decisions you will have to make. But she and her father present us with their dreams, their works, and their lives. It’s a bold stroke. One that fully lives up to the promise of its title.

For more information about the film, visit www.smallangstfilms.com. "My Father, The Genius" received the "Grand Jury Prize" at the Atlanta Film Festival (the top award of the festival) and "Best Documentary" at the Newport International Film Festival.

Upcoming showings of "My Father, The Genius":