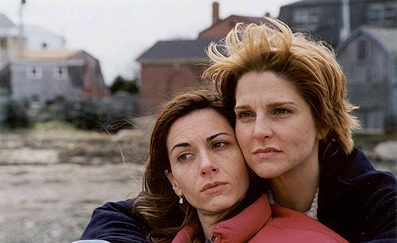 ‘Treading Water’ and other shorts

Share
Reviews of 'Treading Water' and short films to be shown at the 18th Annual Boston Gay & Lesbian Film/Video Festival on May 2-19.

Holidays always seem to bring out the best in some people and the worst in others. This holds true in director Lauren Himmel’s "Treading Water," in which lobster fisherwoman Casey Olsen (Angela Redman) tries to make her family accept her lesbian relationship. Written by Himmel and Julia Hollinger and filmed in Marblehead, MA, "Treading Water" portrays her struggle with insight and compassion.

The story, set in a New England coastal town, takes place as the family prepares for a Christmas party and the annual Christmas Eve family dinner. Casey wants the family to allow her lover Alex to spend the events with them, but she anticipates resistance. Alex (Nina Landey), a caseworker for troubled youth and overall believer in decent causes, wants just to barge in, confident that good will triumph over any hostilities. Casey’s joke-telling salesman of a father (Richard Snee) seems more concerned with people getting along than with anyone’s sexual preference, brother Shawn (Robert Harte) tends to accept anyone else’s troubles with a scornful, ironic laugh, and kid brother Andrew (Shawn Nee) — preoccupied with his own problems, including an arrest for selling drugs — doesn’t even know she’s gay. But her mother (Annette Miller) is unforgiving, feeling Casey has betrayed and disgraced the family, and no one in the family has the courage to stand up to her.

Unbeknownst to all, Alex has already met the family: They know her as Alexandra, Andrew’s drug counselor. The conflict between Casey and her mother escalates as Christmas approaches, and Casey’s relationship with Alex suffers as a result. It becomes clear that Casey is as stubborn, in her own way, as her mother, and almost as opposed to her two lives meeting. Unwilling to choose between Alex and her family but unable to reconcile the two, Casey finds her life in a torturous standstill. A compelling, memorable film, "Treading Water" builds to an inevitable confrontation and a conclusion that avoids contrived reconciliation and easy melodrama. Miller is dead-on as the harsh mother, Landey charms as the energetic optimist Alex, and Redman conveys the brooding frustration of Casey, caught between them. Her characters may be treading water, but with this film, Himmel is swimming ahead of the pack.

"Treading Water" will screen as part of the festival on May 9 at 6 p.m. and May 19 at 12 p.m.  For more information about this year’s festival, visit http://www.mfa.org/film/gay_lesbian_2002/default.htm

Other highlights of the Boston Gay and Lesbian Film Festival include the humorous shorts "Celebration," local filmmaker Daniel Stedman’s unexpected take on emerging from the closet, and "Your Better Butch Fashion," in which a concerned mother tries to improve her daughter’s fashion sense while she still lives under her roof. Linda Shiffstein (Sheila Stasack) is your stereotypical Jewish mother, overbearing and loving all in one. And if her daughter Marilyn (Jen Herbert) is going to be a lesbian and dress like a man, couldn’t she at least wear nice clothes? Writer and director Margaret Broucek stages the film as a mock documentary, in which Linda and her husband set forth on a series of desperate escapades to bring their daughter around before she moves in with her new girlfriend. The results are sure to win a smile.