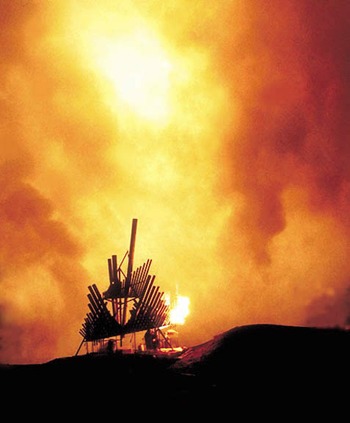 The News on Nora: Talking with Nora Jacobson

Share
Vermont filmmaker Nora Jacobson chats about her latest film 'Out of Her Mind' and its surprising star.

Ah, Vermont. It’s home to quaint covered bridges, marvelous maple syrup, scenic ski resorts and the very first fire organ of the United States. Yes, that’s right — there’s a new instrument in town that guzzles propane, stands 20 feet tall and shoots fire out of its pipes. Its sounds are exotic enough to make musicians throw down their guitars faster than a 5-year-old shuns toys from his fourth birthday. And when Nora Jacobson finishes editing her feature film, "Out of Her Mind," you’ll get to settle in with some popcorn and watch this lyrical giant steal the scenes.

So, who is Nora Jacobson and what’s with all of this playing with fire? I chatted with the Vermont filmmaker about her latest movie, her interests, and why she didn’t go Hollywood with her project. But let’s start at the beginning.

Nora started making Super 8mm films in high school because it was "fun and a good way to get out of writing term papers." She carried her interest with her to college, where she was drawn to editing like frat boys to late night pizza. But love affair aside, she still didn’t see filmmaking as a real career.

It wasn’t until Nora transferred to another school and became exposed to avant-garde experimental film that she started to take it seriously. After graduating, she worked for a documentary filmmaker and then decided to get her master’s in film production at the School of the Art Institute of Chicago. Then she moved to Hoboken and made her first feature documentary about the gentrification of the NJ town.

"Delivered Vacant" took Nora eight years to complete, and although her family and friends thought she was crazy, the film got accepted to Sundance and the New York and San Francisco Film Festivals.

In 1995, Nora moved back to Vermont to pursue her first feature film, "My Mother’s Early Lovers," adapted from an autobiographical memoir by Sybil Smith. In 2000, she began writing her current film, "Out of Her Mind," which she just finished shooting last month.

Emma (played by Morgan Bicknell) and Sonny (played by George Woodard) in "Out of Her Mind."
[Click to enlarge]

SS: Let’s talk about "Out of Her Mind." Tell me about the story concept.

Jacobson: Well, it’s about a teenage girl, Emma, whose best friend is killed in a car accident after a drinking party in the woods. Emma was supposed to be the designated driver, but freaked out when the police showed up, and ran into the woods. All of her friends drove away and then there was this accident. When Emma’s friend dies, she can’t face her feelings of responsibility. She represses them and ends up hanging out with an artist, this older man named Sonny, who is building a fire organ. Emma helps him build this amazing instrument. It’s kind of a coming of age story where they help each other go through some difficult times.

SS: How did you come up with the idea?

Jacobson: I have always been interested in the issue of kids rebelling and wanting to be independent, but parents not feeling they’re ready to be autonomous. I was also interested in how that paralleled with people who are caught in the psychiatric system. So, I came up with a story linking this teenager to this man with a psych history. There is a kind of unlikely relationship between the two of them.

SS: Is the unlikely relationship something inspired by your own life?

Jacobson: Not really, although when I was making the documentary about Hoboken, I spent a lot of time at homeless shelters, because I was recording people’s housing stories. Often times, you pass these people on the street and you think they’re crazy. But if you take the time to stop and get to know people, you realize how interesting they are and what their histories are. Appearances can be very deceiving.

SS: Let’s talk about Emma and Sonny. What are they like?

Jacobson: Emma is very feisty and outgoing. Before the accident, she was very optimistic and cheerful. She’s not at all timid or shy. She’s very self-confident and smart. Sonny is a recluse who is afraid of people.

SS: How did you do the casting?

Jacobson: I did a lot of casting for Emma. I went around to different colleges and then ended up doing auditions at Middlebury College. The minute Morgan Bicknell came in, I thought she was Emma. I was auditioning all of these other kids, and she came in late, and I just set my eyes on her and thought, she looks amazing.

George Woodard, who plays Sonny, was in "My Mother’s Early Lovers." He’s a wonderful actor who now lives in Vermont but has spent some time working in LA. He is a musician and a farmer, as well as being an actor — a really wonderful actor.

SS: A musician, a farmer and an actor? That’s an unlikely combination.

Jacobson: Not in Vermont.

SS: Let’s talk about the fire organ. It seems like something you don’t hear about every day.

Jacobson: Right. Well, I was trying to figure out what kind of artist Sonny would be. I heard about this French sound artist, Michel Moglia, who builds fire organs and stages huge extravagant shows all over the world. His work had never been included in a narrative story context and he’d never been to the United States. So, he came over on December 10th, stayed a month, and built the fire organ we used in the film.

Jacobson: Well, you have to be careful. You have to learn to use these torches. It’s a little bit dangerous because you’re using propane and you can burn yourself. But it’s very spectacular and very, very interesting, beautiful sounds come out of it.

SS: Can you describe the sounds?

Jacobson: Ours was 20 feet tall. It has pipes sticking up. Different sized pipes shooting upward in a fan, held together by a wooden frame.

SS: Do you think we’ll ever see one on MTV?

Jacobson: Well, maybe so. Yeah, maybe we’ll make a music video as a promotional tool for the movie. Sure.

SS: What were some of the challenges of making this film?

Jacobson: The first week we did almost all night shoots and very long hours starting at like 4 p.m. and working until 7 a.m., at night, in the winter, outside. That was definitely a challenge.

SS: How about the rewards?

SS: What do you want people to walk away with when they see this film?

Jacobson: I’d like people to not be so complacent about the whole issue of psychiatric drugging. I think our society is very over-drugged. It’s really scary and dangerous that we are becoming so reliant on drugs to regulate our moods and our emotional well-being. There are other ways of healing people.

SS: If you were to cast this movie in Hollywood, who would play your two lead roles?

Jacobson: Well, as a fantasy I thought of Viggo Mortensen for Sonny. And for Emma, we did at one point think of Anna Paquin. Her name came up, but I didn’t pursue it. And then someone mentioned Thora Birch, but at the time, I think she was doing "American Beauty."

SS: Why didn’t you pursue it?

Jacobson: I didn’t want to waste time trying to find someone. I wanted to make the film. Casting is really hard to do and unless you have money to hire a casting director or you have contacts in Hollywood or New York. It’s hard to get a name.

SS: One last question. What would someone be shocked to learn about you?