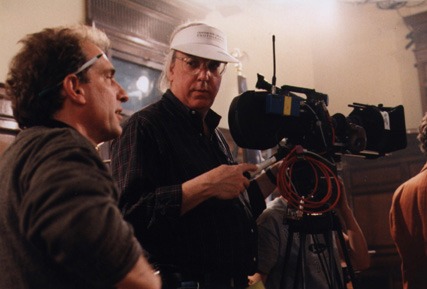 Past, Present, and Future: A Conversation with Producer Eric Stange

How do you make a documentary film about a subject for which very few images exist? Producer Eric Stange grappled with this basic conundrum while making "Murder at Harvard," an innovative retelling of the grisly 1849 murder of Boston Brahmin Dr. George Parkman by Harvard professor John Webster. As historical documentaries routinely tackle subjects that predate photography, Stange could have opted for one of a number of well-established conventions, such as reenactments or dramatic readings of letters or journals from the period.

Rather than settle for the muddle of fact and fiction such techniques sometimes produce, Stange incorporated the issue of authenticity into the film itself. Much as the subject matter–a trial–is concerned with a quest for truth, so the film’s overarching structure poses questions about the ability of both history and documentary film to accurately portray the past.

Noted historian Simon Schama provided the inspiration for both the project and its many-layered format. Stange and Melissa Banta, a visual curator at Harvard and the film’s co-producer, were looking for a film subject. "I had just read an excerpt from Schama’s account of the Parkman murder in Granta," Stange recalled. In "Dead Certainties (Unwarranted Speculations)" published in 1991, Schama used the Parkman murder as a vehicle for exploring the role played by historians in shaping perceptions of the past. "Schama gave us a way to do it, because his account of the murder is partly fact, partly fiction," Stange continued. "This is what made the project interesting to us, that you have the murder and then Schama trying to make sense of it 150 years later."

This emphasis on historiography did create funding problems. "The film isn’t about an icon, a president–it’s just a squalid little murder," Stange explained. "What intrigued us is what it says about Boston at the time, the window it provides onto the world of the elite." However, Stange admitted that it is not an immediately interesting topic, especially to investors more accustomed to dealing with historical topics than with the idea of history itself. He credits the Massachusetts Foundation for the Humanities for providing the project with the $15,000 in seed money that he and Banta used to create a trailer illustrating the unusual structure they intended. Shooting with Schama one day and with actors another, they created an 8-minute film featuring two parallel story lines: the narrative of the murder mystery in 1849, and Schama’s present-day search for the "truth" behind the story.

What did happen? On November 23, 1849, Dr. George Parkman, a 59-year old physician and scion of one of Boston’s wealthiest families, went to collect a debt from Dr. John Webster, a professor of chemistry and friend and colleague at Harvard Medical College. Webster’s Harvard salary was not commensurate with the social position he liked to maintain. When Parkman failed to return from his visit to Webster, many, including the police, assumed he’d been robbed and murdered by one of the thousands of Irish immigrants streaming into Boston in the wake of the Potato Famine. However, Ephraim Littlefeld, a janitor at the Medical College, suspected Webster and spent two nights tunneling beneath Webster’s basement laboratory until he discovered dismembered body parts hidden in the professor’s privy. Webster was consequently arrested and, in a highly publicized trial, was convicted and hanged in August of 1850.

Or so the story goes. Lingering mysteries and gaps in the historical record have teased the imaginations of historians, crime-writers, and novelists for the last 150 years. Yet these lacunae provide "Murder at Harvard" with its subject, allowing Schama to probe the inner lives and thoughts of the people at the center of the story. "Simon has thought brilliantly about how to bring history alive on TV," Stange commented, praising his ability to infuse 150 year-old characters with life. Referring to the film’s dual structure, Stange added: "The hardest part was striking the right balance–to achieve the synergy necessary for the film to come together as a satisfying whole. Simon is the voice of the film, which is the story of how he came to write the book."

Stange was anxious to avoid the clichés of historical reenactment–the long pans across interior spaces where something important once happened, the hazy shots of telling details, the absence of dialogue: "Too often reenactments come across as just what they are–halfhearted attempts to make history come alive in a dramatic way without using the elements that make for dramatic storytelling: language, facial expression, bodies reacting to one another." To this end, Stange and Banta decided to recreate the scene of Webster’s trial with actors speaking dialogue based on the actual court transcripts. Although Stange was nervous about directing actors for the first time, he soon realized that his inability to speak formally about their craft wasn’t an obstacle. "What they need to hear is what you want the role to be," he said. Stange’s positive experience whetted his appetite for fiction; he is presently at work on two screenplays.

If Stange does move into feature filmmaking, it would not be his first career shift. Stange was a journalist for 10 years, covering film for the "Boston Herald." He got to know the documentary community, and decided to try his hand at what he calls "three-dimensional storytelling." He is also attracted to stories that aren’t well-known, but is realistic about financing. Lamenting the dearth of viable funding options for historical topics, he added with some rue that "it’s pathetic that as a nation we care so little about our past."

Stange is optimistic about the chances for young filmmakers to get their work screened, if not financed. "What I tell young filmmakers is, if you want to get into filmmaking, get the gear, get the mini DV, and find a topic that’s going to last, as chances are, it will take longer to finish than you’ve planned. While it’s helpful to go to work for someone else, the most important thing is to make a film. Once you’ve done that, you’re a filmmaker; you’ve got something to show for yourself. It’s easy to get something on TV; you can almost always find an outlet for something if it’s good." He also advocates finding good people to work with and tapping into the local filmmaking community.

Like a number of Stange’s past projects, "Murder at Harvard" will be broadcast by PBS as part of "The American Experience," currently scheduled for early 2003. To catch his work before then, check out "A Day in the Life," an inside look at the Jeremiah E. Burke High School in Dorchester, airing on April 4th on WGBH.