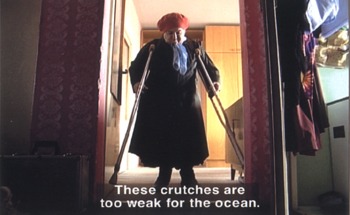 Share
Take a look at three films currently playing at the New England Film and Video Festival: 'Transmitting Baba,' 'To the Land of Bliss,' and 'No One’s A Mystery.'

This year, the New England Film and Video Festival is chock full of interesting characters in fascinating films. Three caught our eye, and are reviewed below.

Once upon a time, people wrote letters to loved ones in faraway lands. Now, we make phone calls, send e-mail messages—some people even send videos. Miso Suchy had been sending letters from his home in Syracuse, New York, to his parents in Slovakia, telling them about his son, Myko, when an idea struck: Myko, who was starting to be fascinated by television, would probably love to see a video of his grandparents, Baba and Dedo. Suchy asked them to film themselves, and Babo decided to tell a crazy story of her journey to see the grandson she’s never met.

The result is the short documentary "Transmitting Baba." Videos are sent back and forth–videos of roller skating, diaper changes, and relatives talking to the camera and even talking "directly" to each other’s images on the screen. Baba’s imagination is decidedly old-world, whether she’s pretending to swim across the Atlantic or turn herself into a Christmas tree, and the juxtaposition with Myko–who only occasionally shows interest in the videos, preferring to be spoon-fed Richard Scarry books—helps illustrate how the boob tube has changed how we love and play and interact. Still, the video communication feels better than none at all, and it offers Myko the opportunity to "visit" his Baba and Dedo in a way they never imagined possible when they were his age. "Transmitting Baba" exudes the warmth of a family gathered around a hearth–even when that family is separated by an ocean and half a continent.

"To the Land of Bliss"

Wen-jie Qin’s documentary provides a glimpse into an even more distant land. As a young girl, she caught her first glimpse of Buddhists. It was during the final days of China’s Cultural Revolution, practicing religion was illegal, and the mountains were a final refuge. Her parents explained that Buddhists were people who "left home to solve the cycle of life and death." More than 20 years later, Wen-jie Qin returns to the sacred Mount Emai in southwest China to research the Buddhist revival, just days before Master Jue Cheng, an eminent monk, dies of a viral infection that has paralyzed his legs. Qin details the elaborate rituals surrounding such a death, from the ceremony of "releasing the burning mouth" to the final burial of the monk’s relics. The body is viewed and prayers are chanted before the corpse is encased in a wooden box, sealed up in a wall, and ultimately burned to ash.

The monks and nuns seem especially eager to impress Qin with Buddhism. Much like schoolchildren, the nuns try to one-up each other with claims of mystical experiences, especially when describing what they saw emerging from the chimney of the burning chamber. Qin describes how they repeatedly insist that she has returned solely to document the master’s last days and funeral rites, as if fate propelled her back to her homeland for this special purpose. The thought prompts some introspection, but unfortunately Qin doesn’t show her return on camera. As mere voiceover, however, the autobiographical musings never reach their full potential; it would have been better to flesh the angle out.

Regardless, "To the Land of Bliss" offers a fascinating view of another culture at a pivotal moment. The elders of the monastery are dying, and no monks are available to carry on their teachings. Even so, their thoughts are not of this world. The monks of the Boaguo Si and the nuns of Fuhu Si ponder the fate of the master’s spirit. Did he arrive in the Land of Bliss, the afterworld without suffering or death or rebirth, but only happiness and eternal life? And what will happen to us when we die? The living, of course, will never know for sure.

"No One’s a Mystery"

In a more home-grown festival entry, Shandor Garrison adapts and directs the Elizabeth Tallent short-short story "No One’s a Mystery." Set entirely in the cab of a pickup truck driving through cornfields, the action consists of dialogue between an 18-year-old girl (Maiana Borsody), in a snug pink tank-top and too much eyeliner, and her married lover (Doug Smith). He has just given her a three-year diary and insists he can predict what she’ll write in it. The interplay between the hopeful teen, still unharmed by life, and the older man, jaded by his unhappy marriage, is chock-full of insight, with moments of meanness, tenderness, and wit.