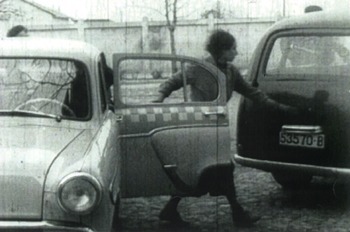 Mixing it Up at the New England Film & Video Festival

Share
A venerated local festival gets a new format, courtesy of its new director.

Abigail Harmon, the new director of the New England Film & Video Festival, plans to mix things up when the festival kicks off on April 1. "This year will automatically take on a different feel," she said. "I am building on the previous 26 years of experience, but I am definitely putting my own spin on everything."

How is she doing that? Each screening will include an award-winning film, and a short will be paired with every feature. Categories have been jumbled a bit. "Everybody gets to see something they might not have otherwise seen at each screening," Harmon said. This drive to blend various types of work and to expose viewers to something new is also behind Harmon’s decision not to announce "themes" for each night, for fear it might prejudice viewers.

The festival will continue the tradition of having film directors on hand to answer questions at each screening, and will also feature "Sundance Night," an evening of films presented at the Sundance Film Festival, coordinated by Boston Film and Video Foundation and the Sundance Institute.

Highlights of the festival include "Best of Festival" winner "My Father, the Genius," a very personal documentary directed by Jamaica Plain resident Lucia Small. It tells the story of Small’s estranged father, Glen Small, a visionary architect with dreams of saving the world through architecture, who was nevertheless oblivious to the damage his singlemindedness wreaked on his family. The director’s approach straddles the positive and negative views of a man who is uniquely talented but also incapable of creating a stable family life. In his later years, Glenn Small struggles financially and emotionally with the possibility that his dreams may go unfulfilled. He asked his estranged daughter to write his biography; instead, she produced this touching portrait of a dreamer and egomaniac. Told through starkly honest interviews with Small, his peers, former students, clients, ex-wives, and girlfriends, what emerges is a portrait of not only a man and his family but of the doomed ideals of the 1970s and the generation it produced.

Also notable is "Best Independent Video" winner "Transmitting Baba," filmmaker Miso Suchy’s attempt to bring tales from his Slovakian mother to his American son, who has never met her. The film is composed of "video letters" from Suchy’s mother, Baba, in Slovakia. Baba turns her home into a fairy tale land where she cooks a magic stew for her grandson, hikes across Europe, and transforms herself into a Christmas tree. "What is actually transmitted remains to be seen," Suchy said.

The festival will also be screening a wide array of animated and experimental films, such as "Best Experimental" winner "Cowards," a dual-screen video-art film that examines reality, memory, and time through a story of emotional and sexual abuse. The film was made by Michel Moyse, founder and co-director of the Center for Digital Art. Also notable is "Water From the Moon," a short black-and-white film that uses live-action marionettes to tell the story of a washerwoman who discovers a winged man in her closet, and "Clip:400f," a sequence of 10 images presented in 10 groups of 400 alternating frames, which gradually disfigures the image of a bird through the continued addition of competing imagery.