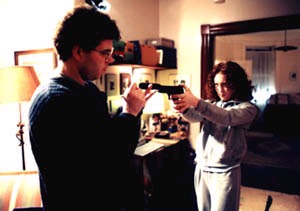 How to Be a… Producer

Share
Veteran NOVA and Frontline Producer Jon Palfreman and Independent Filmmaker Richard Moos offer advice on what it takes to be a film producer.

You see the title "producer" in every main title sequence and listed several times in the credits, but do you really know what it means to be a producer? Jon Palfreman, founder of The Palfreman Film Group and Richard Moos founder of Cathartic Filmworks are here to explain the role of a producer, how to become a producer, and how a producer gets the job done.

Richard Moos has produced feature films, music videos, short films, documentaries and programs for television broadcast. He defines the producer’s role as "The Admiral of the Navy." At the end of the day when the crew is wrapping up, or the editor is shutting down his computer after his last cut, the producer is the person who takes responsibility for everything that has taken place during a day of production.

What kind of knowledge makes a successful filmmaker?

Jon Palfreman, a documentary producer whose works include 30 acclaimed documentaries for PBS, and regular shows on NOVA and FRONTLINE, views a producer as the manager of the project — the person who has knowledge of every aspect of the production including writing, directing, and an understanding of the technical end including sound design and editing. Palfreman does not feel it is necessary to attend a film school in order to pursue a career in filmmaking but recommends an internship as a great way to get your feet wet and find out if you fit in. If you want to pursue the non-fiction genre of filmmaking, it’s important to be knowledgeable about the subject you are planning to film. Palfreman holds a BA in Physics from the University College, London and a Master of Science in History and Social Studies of Science from Sussex University, London. Since he enjoys science and technology that’s the niche he focuses on. His films are a reflection of his interests, and he uses the medium to expand on areas he is already acquainted with.

What are the biggest challenges?

Palfreman says you have to be really passionate about your subject matter because it is what drives you. You deal with being judged and run into obstacles along the way, but that all improves with experience. As a producer you become a problem solver, and learn how to deal problems so that you can move on. You also have to know how to solve your next problem before it even arises — you need to be quick and practical.

But where’s the creativity?

Palfreman sees the magic in the edit room. This is where all of the hard work comes together. Initially it’s painful — until you see your scores of interview bites and b-roll shots organized. The producer is the one who takes a concept and makes it come alive. It makes a 300-hour workweek worthwhile.

Palfreman says that as a producer, you want to shine and experiment with all the possibilities including visual effects. It’s easy to become fascinated with the different ways you can transform your story. But Palfreman warns that what is most important, is to make sure your audience understands the story you are trying to convey. Sometimes advanced technology will not strengthen your story telling.

So you want to produce features?

There are different kinds of producers including: commercial producers, feature producers, and documentary producers. The type of producer you are determines what your biggest obstacle will be. For an independent, feature producer, the major obstacle is money. You are not just handed a script and budget and assigned to produce it. Just ask Rich Moos who is presently producing his next independent film, "Orphan."

Moos undertakes projects that he has a personal connection to and in the case of "Orphan," it was a script that writer/producer Thomas Murtagh brought to him. The idea was that Moos would produce it after they completed a different project in development. Due to a lack of finances Tom suggested he direct "Orphan" instead ("Orphan" was devised as a micro-budge script with a target budget of $30,000) which they intended to give them momentum for their next project and land the financing they needed. Six years later, "Orphan" is just starting to screen to audiences.

Moos feels the main criteria when deciding what project you are going to take on is how many years of your life you are willing to commit. In the "Indie Arena" material investments are another criteria a filmmaker must keep in mind. If you are a producer taking on a project that is a "work for hire" the questions you must ask are: What are you getting paid? Will you profit in the end? Before moving on from this phase you really have to decide if the project has a chance. Moos says it’s not just about getting it finished but it’s also about figuring out if it make sense financially.

How do you know if you are going to make a profit?

Moos says to tabulate the hard cash and deferral investments and you come up with a number. This is the Negative Cost Number and the number you must hit to make the movie a financial hit. After getting an understanding of the cost, you have to research the film market and see what is selling. Moos usually takes a "worst case scenario" approach when researching sales prices. He tallies the low numbers in all of the markets: domestic, foreign, video, cable and so forth. If the sum meets his Negative Cost Number and he is satisfied with his other criteria, it’s a "go" picture.

How do you raise the money?

It’s difficult to have all of the financing in place at once. For several of Moos’ films, funding came from "friends and family" and sometimes from places he never thought about. However, when producing an independent film, sometimes you’re forced to work with the cash in your pocket. Enough cash and good will are Moos’ driving force. As a producer you have to constantly remind yourself of the expenses such as the lab fees, editing, music, prints, festival entries, marketing etc. If the film gets picked up and the buyer or distributor acquiring it meets the exceeded Negative Cost Number, you can stop the hunt for money. If not, you have to continue to seek funds to figure out how to pay your investors.

When does casting come into play?

Moos begins the casting process after his script is rock solid. He considers

it the most important part of production but warns that sometimes you have to take the best you can get. It is important to search long and hard because there is talent out there looking for good roles regardless of the pay. Independent filmmakers do not have to limit themselves to non-union actors because unions such as SAG have implemented a variety of contract structures that accommodate all types of production budgets. If you want to hire SAG actors you must become a SAG signatory and must abide by the union rules.

How do you find the right crew?

There are crew referral and on-line services but for Moos, it starts with the people he knows, then the people they know and so forth. If you hire crew that aren’t paid to be there then they probably want the project to be the best it possibly can. It’s important to take care of them and according to Moos the simplest way to care of them is to feed them and make sure they get enough rest. A budget that accommodates a reasonable work schedule and crew meals is a basic criteria. If you believe your project will have commercial success, Moos suggests to make your cast and crew equity partners. If you offer them actual investment, you are demonstrating that you think their work has value, which translates into pride. Moos finds that this "sweat equity" is usually as valuable as cash.

How do you properly organize a shooting schedule?

Pre-production is the key to ensure you are burning your resources efficiently. The script acts as the design plan and the budget lays out the material parameters of the movie you will build. The script breakdown and schedule are the blueprints and the call sheets and shot lists are the daily work orders. Although it’s common sense, Moos emphasizes that the more prepared you are, the smoother things will go. "On the day," the only thing that counts is "making the day," otherwise by the end of your schedule, the camera goes home and you’re left with a partial movie.

Finding the right script or story to document, raising the money, making the casting selections, securing the crew, and working according to a schedule are only the beginnings of how to coordinate a production. As you can tell by these few stages, no matter what the genre of filmmaking, the producer is a key player in making a successful film.