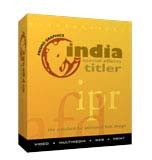 Share
A review of the special effects title program that turns any object into an animated font.

If there’s one area where technology can give the artist’s imagination a place to run wild, it’s in animated titles. It’s a place where for years the tools of the trade have trailed artistic vision.

Where an artist could envision objects turning into letters, or computer screens fluttering with binary code that morphs into title cards, actually doing this was a pain in the Athlon. Until India Pro from Prismo Graphics.

India Pro claims that “anything can be a font,” and they’re right. You can add object, movies, textures and even use system fonts to create India title graphics. But with India Pro’s included 24 CD-ROMs of fonts, effects, animations and textures, your imagination might run out before you got through them all.

At its core, India Pro is similar in look and feel to an Adobe After Effects or LiveMotion, but with a focus on adding and animating fonts instead of motion graphics. India types out fully animated fonts (called DVFonts). Objects and textures can also be converted, and all the elements can be layered and compiled to include multiple animations in a title file.

India comes with dozens of pre-set animation fonts, styles and effects. All the elements in these pre-sets can be altered to create an unlimited number of new title animations.

The flexibility India Pro provides takes some getting used to. Never before has a graphics application given the user so much freedom! Type out a line of text (or use a 3D object or movie as the font) and each character can be controlled independently or as part of the entire track.

View the Timeline and adjust the timing of all the tracks. Change the motion path of not only a line of text, but of each character in that line as well. Characters stay part of their track, even when they’re moved far away from the rest of the text.

This is an application that provided unlimited artistic freedom, while still conforming the output to standard formats. Export India animations as QuickTime or AVI files (complete with alpha channels) for use in any standard non-linear editing program. The only question I had throughout my evaluation was, “How can one program do ALL this?!”

I found the rendering time to be a bit sluggish, taking about 2 minutes for a 1-second clip, although the complexity of the animations presumes that creating these files will be CPU-intensive. Trying to make a complete title movie, with background movie and animated title, could result in a day-long render. Better to create the titles in India Pro and do the rest of the compositing in After Effects or Final Cut Pro.

Since India Pro works with bitmapped images, the graphics can become distorted if re-sized later. So work with the final output resolution (or higher). I don’t know if it would be possible for India Pro to use vector graphics (probably not, since the textures and movie files wouldn’t convert well), but something to deal with the challenges of resizing the output would help designers creating titles for multiple media (such as video and the web.)

I would also love to see India Pro be able to output Flash files, since it would leave Macromedia’s Flash and Adobe’s LiveMotion in the dust if it did. Even getting an animated GIF requires outputting the file to a GIF animating application.

There’s no single application on the market that does it all, but what India Pro does it does better than any other program around. It’s easy to use, and the simplicity of its interface belies the fact that it’s one of the most feature-packed applications in the motion graphics world.

India Pro for Macintosh and Windows comes bundled with 24 CDs containing 600 motion graphics and 70 DVFonts, the FontMaker utility, plus a separate disc of spastic animations called Wiggles and a dreaded USB dongle. A standard version excludes the DVFonts and FontMaker. Both are available at www.dvfonts.com. See a sample of India Pro in action.

India Pro for Macintosh and Windows comes bundled with 24 CDs containing 600 motion graphics and 70 DVFonts, the FontMaker utility, plus a separate disc of spastic animations called Wiggles and a dreaded USB dongle. A standard version excludes the DVFonts and FontMaker. Both are available at www.dvfonts.com. See a sample of India Pro in action.