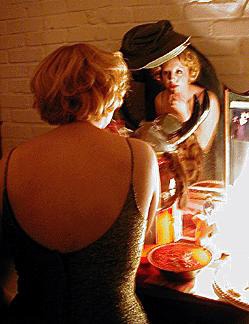 Off the Cuff Filmmaking

Share
Rhode Island Filmmaker, Christian de Rezendes pays tribute to the Dogme 95 Manifesto with his new film, 'Getting Out of Rhode Island.'

Some might say that the austerity of the much-publicized Dogme 95 filmmaking manifesto, which aims to strip down cinema to its raw, essential basics with rigid mandates about natural sets, natural lighting and realistic acting and storylines, is already a way of life for an independent filmmaker. When working with limited means, constructing expensive sets or high-tech special effects isn’t really an option anyway. So it seems natural that an independent filmmaker like Christian de Rezendes would choose to shoot his next film in the Dogme style. And some artists might even say that working within such constraints ultimately forces one to be even more creative.

The Rhode Island-based filmmaker is now editing "Getting Out of Rhode Island," an entirely improvised film that was shot in one weekend and conforms to many of the tenets of Dogme. De Rezendes has already completed two documentaries — including the award-winning "Alzira’s Story" — and is in pre-production on another.

His decision to shoot his first narrative film in this style has clearly been influenced by the realism of the documentary form. "I love the naturalism around shooting events, and to see all of those elements working with a dedicated and talented cast and crew was something truly special," he says. "I wanted to make a film with a rawness of emotion, like it was really happening."

To accomplish this, de Rezendes created a detailed backstory for his actors and strongly developed the storyline, but encouraged them to create their own characters for the fully-improvised 2.5-hour shoot. The film tells the tale of a struggling local filmmaker who is torn between his comfortable small-town life and his dreams of being a successful filmmaker. But he sees an opportunity to make it big when a famous Hollywood director comes back to his hometown of Slatersville, Rhode Island and agrees to direct the upstart’s first film. The majority of the film is an improvised party scene, where local actors and artists have gathered for a fundraising open house for A Flash of Yellow Pictures, his new production company. Over 40 actors created characters for the scene or played themselves, all arriving with their own personal agendas that unfold over the course of the evening.

Shooting the film this way made the filmmaker’s technical work much simpler, de Rezendes says, but put all the responsibility onto the actors to improvise and maintain their characters for nearly three uninterrupted hours. He says he prefers the improvisational style, however, as it produces a more natural and believable performance. And the actors seemed to appreciate having such free creative rein as well. Lead actor Jeremy Banks, who plays the struggling filmmaker who hosts the open-house party, says it was the most enjoyable working experience he’s ever had, and even likens it to therapy.

"I found it very rewarding doing the improvisation because the deepest darkest hidden thoughts and feelings come out either consciously or on a subconscious level when you’re playing somebody else yet you’re utilizing your own thoughts feelings and memories," he says. "I found that the emotions I had to conjure up really provided a cathartic enlightenment, of sorts." He adds that the experience created a tight-knit bond among the principal actors that will be apparent in the final product.

De Rezendes was also quite pleased with the end result. "I created the characters [but] the main cast brought them to life," he says. "We were lucky to have this process produce a beautiful cacophony in the end."

And while he acknowledges that working with limited means made Dogme a natural fit for his filmmaking style, he adds that he is also a great admirer of the films of Dogme creators Lars Von Trier and Thomas Vinterberg. "I love the Dogme-like cinematography and editing style," he says. "They simply created with what they had. Less was more." He adds that the work of Dogme filmmakers and the success of films such as "Dancer in the Dark" and "The Celebration" have helped to level the playing field for independent filmmakers. "Cinematic traditions were truly altered [by Dogme], making it more acceptable for filmmakers with limited means to make good films that would be seen with more of an open eye."

Still, "Getting Out of Rhode Island" "is not a Dogme film per se," de Rezendes says. The film does not conform entirely to the tenets of Dogme. It was shot on digital video rather than 35mm film required by Dogme, but de Rezendes points out that the founders themselves have broken this rule quite often. He also chose to decorate the set extensively, but says this was necessary because the entire film takes place indoors in the same location.

De Rezendes is currently editing the film and expects an April 2002 release date, after which he will submit the film to as many festivals as possible in order to pursue distribution possibilities.