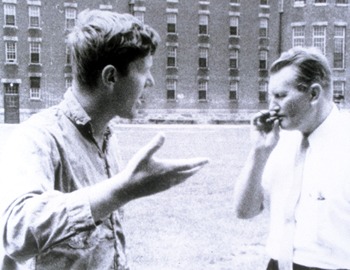 Share
A report of news & events in the local industry for January 2002.

Women in Film & Video/New England (WIFV/NE), in collaboration with the Museum of Fine Arts, Boston, will launch its first-ever celebration of work by New England women filmmakers in a week-long film and video festival, January 28 – February 2, 2002. Entitled Rewind/Fast Forward: 20+ Years of Work by Women in Film & Video, New England, the festival affords an opportunity to view world premieres with the filmmakers present along with a retrospective of celebrated works by veteran New England-area women artists. Many of the award-winning classics have not been screened since their original release. For more information please visit the WIFV/NE Web site at www.wifvne.org or contact Maeve McCaffrey at 617-491-5222 or by email at info@womeninfilmvideo.org

The Human Rights Watch International Film Festival brings its program of challenging and provocative films back to Boston for a four-day festival January 24-27, 2002. The Human Rights Watch International Film Festival will show fiction, documentary and animated films and videos that incorporate human rights themes. The 2002 Boston festival combines a mix of intriguing and sometimes controversial documentary and dramatic films that focus on human rights issues from around the world. For a full schedule and program descriptions visit their Web site at www.hrw.org/iff/boston.html.

"Murder at Harvard" will be shown as part of the Director’s Cut series at the Coolidge Corner Theater at 7 p.m. on January 16, 2002. Filmmakers Simon Schama, Eric Stange and Melissa Banta use a combination of drama and documentary to tell the true story of one of the most famous American crimes of the 19th century — the murder of prominent Boston Brahmin George Parkman. The film tells two stories at once: the murder itself, and historian Simon Schama’s journey into the past to discover the "truth" behind the mystery. The filmmakers will be present to speak about the film and answer questions. For more information call 617-734-2500, or visit www.coolidge.org.

Three films by Armenian-born director Don Askarian will be shown at the Harvard Film Archive January 21-23, 2002. The films: "Komitas," "Avetik," and "On the Old Roman Road," explore the history and spirit of his native land. For further details please visit www.harvardfilmarchive.org or call 617-495-4700.

The Museum of Fine Arts, Boston continues to show films by documentary filmmaker Frederick Wiseman during the month of January. "Titicut Follies," "Near Death," "Belfast, Maine," and "Zoo" are among the films screening at the Museum. Please visit http://mfa.org or call 617-369-3770 for details.

Filmmaker Charissa King and the Filmmakers Collaborative are hosting a fundraising event at the Coolidge Corner Theatre for the documentary "In My Father’s Church," on Thursday, January 17, 2002 at 7:30 p.m. "In My Father’s Church" explores the debate within the United Methodist Church over same-sex unions, as seen through the lens of a filmmaker who is planning her own wedding with her partner. Charissa King will show excerpts from the work-in-progress. Following the screening will be a Q&A session. Wedding cake and other festive refreshments will be served. $10 tickets will be sold at the door. For more information call 617-734-2500.

A panel discussion and film retrospective on the work of Fritz Lang will take place January 10, 2001 at the Brattle Theater in Cambridge, MA. Entitled Fritz Lang: From Berlin to Hollywood and Back, the panel discussion will be accompanied by a screening of Fritz Lang’s film "M," 1931 at 6:30 p.m. For more information please call 617-876-8021.